This is Part 2 of a retrospective of the Millennium Godzilla series. Click here to read the first part: Before Shin Godzilla - Retrospect of the Last Era, Part 1: Godzilla 2000.

“One day the head of production calls me over, 'Tezuka come here. We should get some tea and talk.' He says, 'Right now we're preparing a new Godzilla film,' which [was] Godzilla 2000. 'We want to make a few of them, including next year.' And then he asks, 'Will you direct the next Godzilla?' I act surprised like, 'Who me?'” - Masaaki Tezuka, SciFi Japan TV

In the same year as Toho's sophomore Millennium outing, Godzilla 2000 (1999) had been justified, perhaps even rescued, by Tristar's North American release. However, the likelihood of that happening with every Godzilla film in the new cycle was slim. Takao Okawara's rather derivative answer to the 1998 film was done—There was no reason to allow the stigma of Tristar's misfire affect Toho's Godzilla any longer. They could move on. Luckily a new director had already been chosen while Godzilla 2000 was in production. (1) 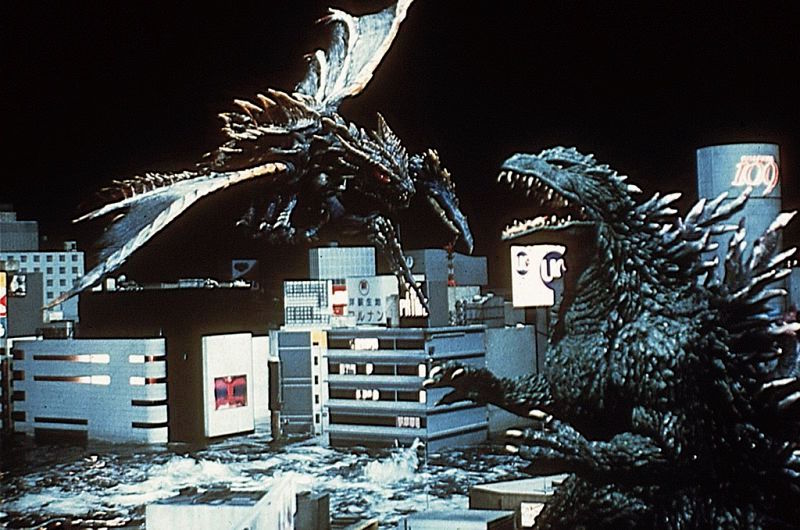 A student of Nihon University, Masaaki Tezuka started as an assistant director for Nikkatsu's television division—A notable influence that would arguably haunt his productions. Being an avid Godzilla fan, Tezuka tried to join the crew for The Return of Godzilla (1984), but was needed for another production. He finally landed a job as second assistant director for Godzilla vs. Mothra (1992). During the production he would work between the live action and special effects units, befriending chief assistant director of special effects, Kenji Suzuki. (1) Fast forward eight years later and the two assistant directors are no longer taking the orders, they're barking them. On the surface this seems like a dream come true, but it's a dangerous position in the post-Godzilla 2000 world.

“Godzilla 2001” needed to deliver where Godzilla 2000 failed, thus it only seemed natural to go in a different direction. “I wanted to make a fun Godzilla movie,” proclaimed Tezuka. (1) Only a handful knew he was the next Godzilla director as he helped with crowd control on the set of Godzilla 2000. (4)(1) Behind the scenes of the behind-the-scenes, he was prepping ideas for the next movie to include a super weapon and a female lead. “I thought a man fighting would be too obvious. So I wanted a woman to fight Godzilla with lots of determination.” (1)

Cutting all ties with Godzilla 2000's continuity, screenwriters Hiroshi Kashiwabara and Wataru Mimura granted Tezuka his wish. They also decided to revisit arcs from their older screenplays without much variation. Mimura, who introduced G-Force in Godzilla vs. MechaGodzilla II (1993) makes no real attempt to differentiate the G-Graspers from its Heisei Series predecessor. Meanwhile, Kashiwabara revisits his revenge-on-Godzilla angle from Godzilla vs. SpaceGodzilla (1994) to equally mundane results. The silver lining in all of this is the Dimension Tide, Tezuka's desired super weapon.

The Dimension Tide is one of the most illogical and fantastically bonkers anti-Godzilla weapons yet: A cannon that can launch a miniaturized singularity capable of sealing Godzilla in another dimension. Unfortunately, said dimension contains prehistoric dragonflies that get loose and provide Godzilla with an underwhelming foe. 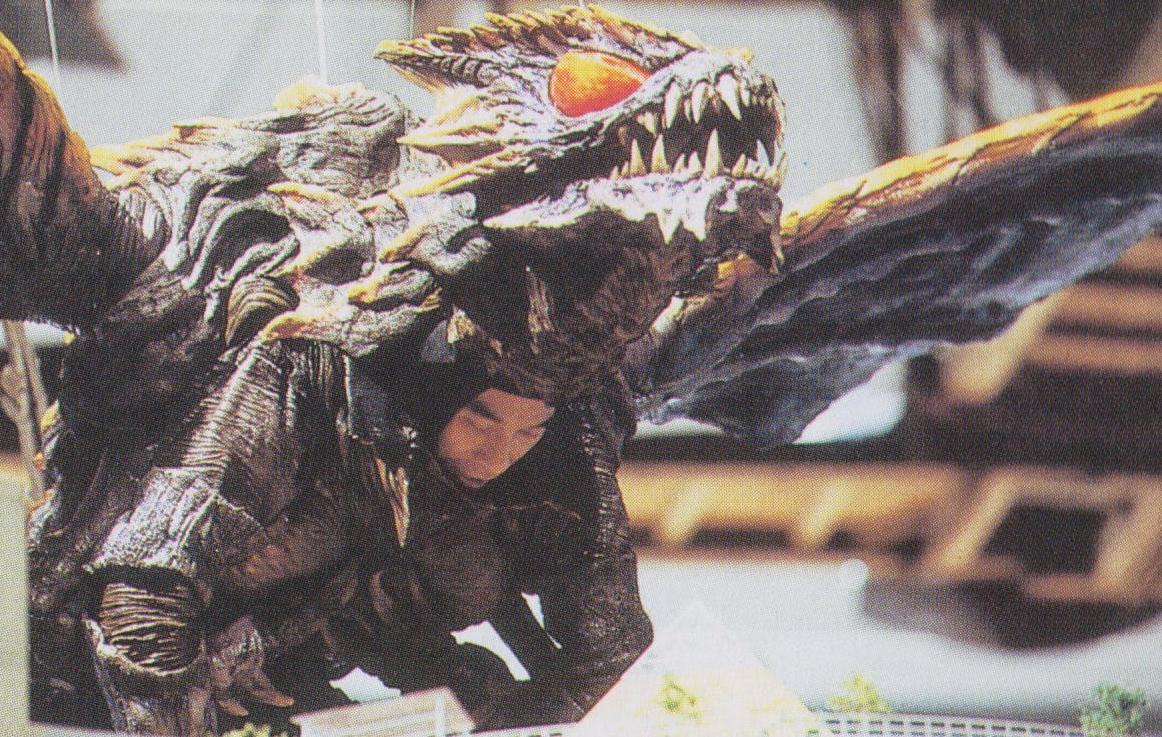 The first act has some promising gusto to it. Tezuka sets it up with a lighter tone than its predecessor, evoking a Tsuburaya Productions sense of world building. Echoing later Ultraman tales, the introduction includes a "task force" character attempting to rectify her past. But fools are those who trust the movie to be as entertaining as any Ultra series.

The film's characters stagnate any form of fun, bumbling through the movie as one-dimensional archetypes. The Dimension Tide suffers most from the pedestrian players that created it. No one cares about the harm it's caused. Alternatively, Dr. Serizawa feared the ramifications of using the Oxygen Destroyer in a post-war world. (Godzilla [1954]) The pros and cons of recreating it were heavily weighed in Godzilla vs. Destoroyah (1995). Mothra vs. Godzilla (1964) found Infant Islanders struggling to see the humanity in outsiders begging them for help—The very outsiders that failed to help them. Prime Minister Mitamura, in The Return of Godzilla, juggled the option of using nuclear weapons on Japanese soil against his country's anti-nuclear policy. A missed opportunity on Mimura and Kashiwabara's part is that no one is terribly concerned about the Diminsion Tide's hiccup.

The glitch unleashed a new organism that ended up damaging the Dimension Tide, flooding Shibuya and birthing a new, massive monster. Lets ignore the fact that a “black hole gun” would discombobulate the world's balance of power in this fantasy. At bare minimum, the characters should feel uneasy about its continued use. Whereas Godzilla 2000 featured varying opinions on how to approach a crisis, Godzilla x Megaguirus: The G Annihilation Strategy can't be bothered to use its cast to examine anything. Ineptitude is what the film excels at when it comes to exploring its own ideas.

For instance, in the film nuclear power is substituted for fictionalized plasma energy, but nothing is ever investigated about this transition or why it's important. It's merely an excuse for Godzilla to come ashore and get the story moving. As a result it comes off as shallow as the atomic lip-service in Godzilla vs. Megalon's (1973) intro; even then, Megalon worked harder to paint it negatively. In Godzila x Megaguirus, the worst that can be said about nuclear power's surrogate is corrupt politicians like to cut corners.

As Tezuka stumbles to keep the film fun, individual pieces of innovation rear every once in a while to keep audiences from leaving. A standout instance is when Kiriko Tsujimori, played by leading lady Misato Tanaka, climbs onto Godzilla for a ride in the Pacific. The highlight was initially something Tezuka was resistant to. “There are some scenes I didn't like … Kiriko Tsujimori riding on Godzilla's back,” Tezuka commented on the screenplay, “ but I finally surrendered and agreed to make them.” (3)(4)

The film went into post-production in August, the same month Godzilla 2000 hit American theaters. (5) Two months later Sony/Tristar was still unsure of what to do with their dwindling Godzilla rights. It was during this time that Michael Schlesinger (responsible for Tristar's cut of Godzilla 2000) and director Joe Dante (Twilight Zone: The Movie [1983], Gremlins [1984]) cooked up the idea of an American produced sequel to Godzilla 2000. “I then went in to see the head of production at Columbia, and pitched him the idea of us doing a modestly budgeted man-in-suit film, using Toho’s effects people,” explained Schlesinger. “I felt we could do it for around $20 million — about a sixth of what the Emmerich film cost.” Schlesinger began writing a spec script for Godzilla Reborn and the bizarre prospect of congruent American and Japanese Godzilla movies, both using suits and miniatures, was set in motion. (6) 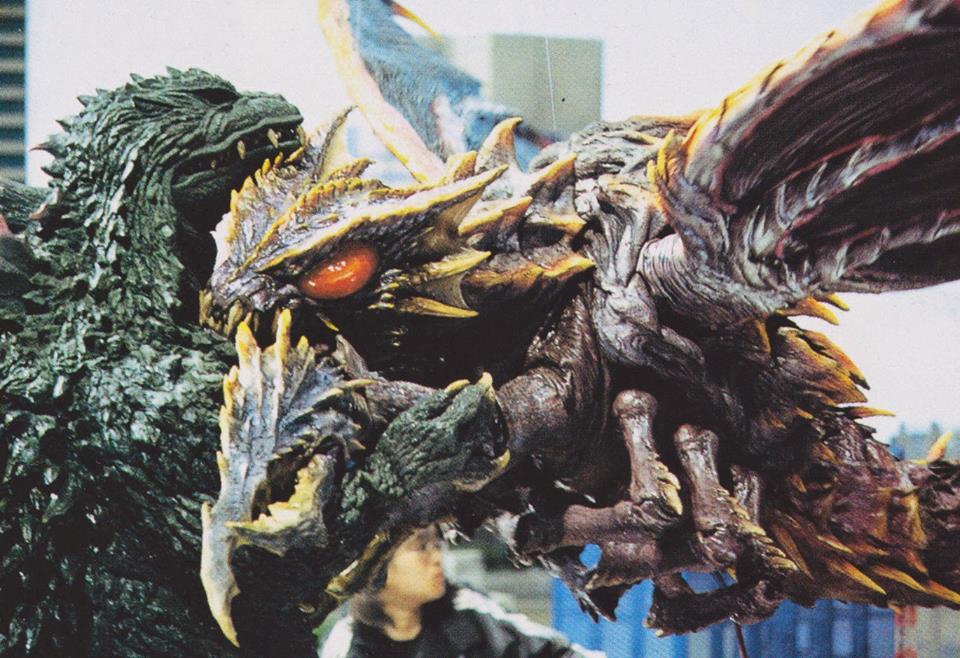 Meanwhile, Godzilla x Megaguirus: The G Annihilation Strategy opened in Japan, December 16th, 2000. The result was discouraging. Tezuka's directorial debut became the sixth least attended Godzilla film in the series, with 1.35 million tickets sold. (7) One might think the novice-director would take the fall for the flop, but that wasn't the case. It's been suggested that special effects director Kenji Suzuki was the scapegoat for the film's failure. Whether or not this is true, Toho had no further interest in him. (8)(9)

Working with a lower budget, (approximately $7-$9 million) Suzuki's special effects were uneven and certainly weaker than Godzilla 2000. (4) Yet the film still featured inspired digital innovation new to the series, including the CG Meganula and Tsujimori surfing on Godzilla's back. In contrast, the opening confrontation is a fun, back-to-basics tokusatsu sequence featuring Godzilla eradicating a small group of G-Graspers. The wonderfully stylized photography almost makes the viewer forget how tactically stupid it is to pit a handful of foot soldiers against Godzilla. Unfortunately, Suzuki would never head the effects for a Godzilla film again and his career ended rather quietly after finding work on smaller productions, notably the Ultraman franchise. (8)(9)(10) 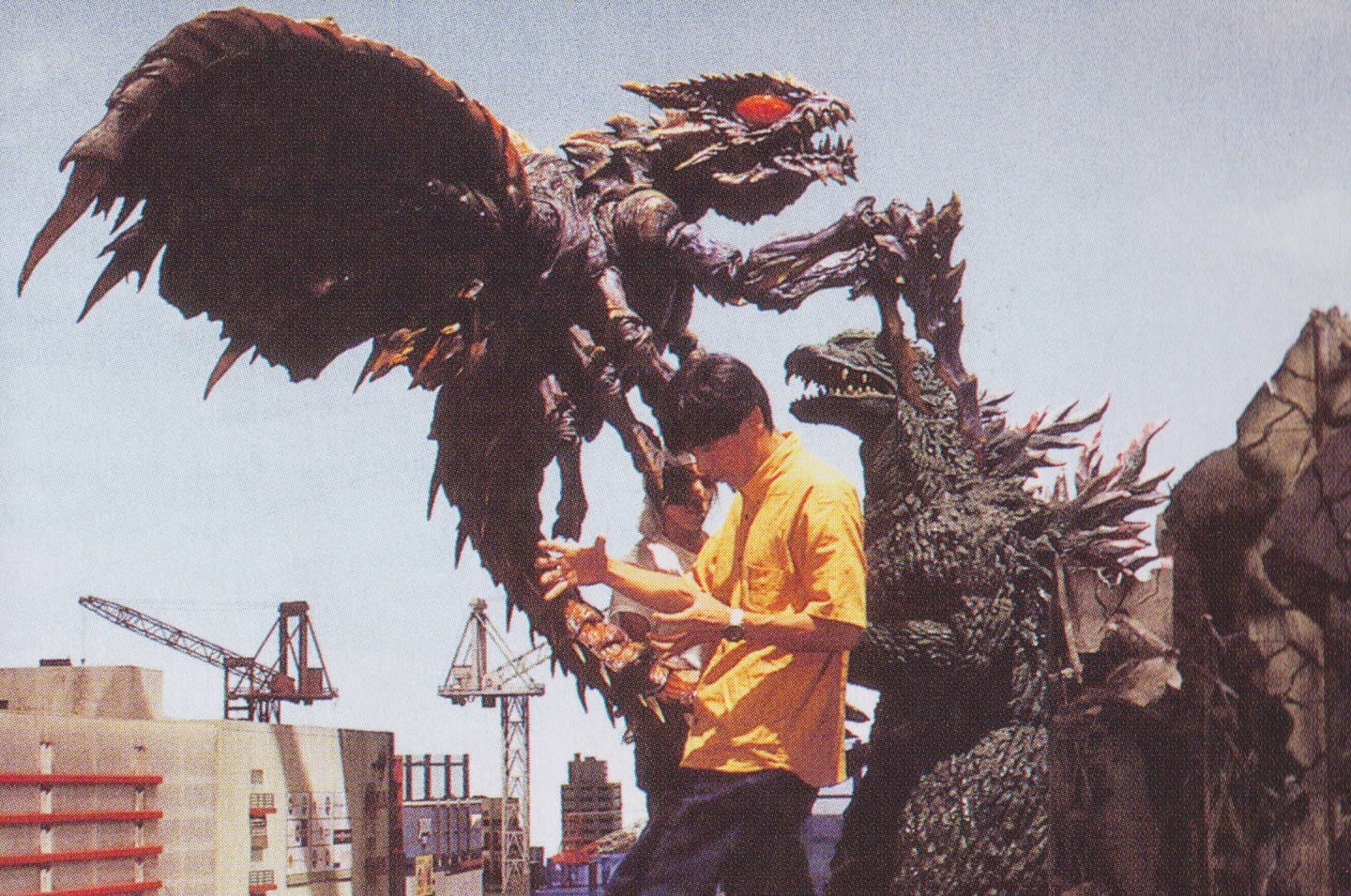 Tomiyama's latest Godzilla cycle was not off to a good start. As a result Toho made no announcement for a follow-up before the New Year. (3)(11) Additionally, Schlesinger's Godzilla Reborn screenplay was going nowhere. After making Toho mandated revisions, late-February 2001, a new production head at Sony refused to read it. “I'm in the Spider-Man business. $20 million movies aren't on my radar,” he quipped. (6) The book was shut on Godzilla Reborn and Godzilla x Megaguirus's failure had left the franchise's future uncertain.

Having scientists spit exposition about prehistoric dragonflies wasn't going to cut it. Audiences needed Godzilla to mean something again. There was an element of depth missing from the new movies and if the series was to continue it needed to find its soul. Appropriately enough, it found Godzilla hundreds of thousands of souls—And they would drive him straight into a generation void of post-war anxieties.

You can review Godzilla x Megaguirus on Scified by clicking here.

I like the design of Megaguirus but she was'nt always my favourite.

The first of many upsets for the millennium series for me. Not horrible, but not a movie I can watch repeatedly within a short time span.

Do like the Meganula swarm taking on Godzilla though, very rare to see him take on a lot of small monsters rather than just a big one.

Ah, this movie. Not the biggest fan. Of the films in the millennium series, this is the one I watch the least. The hit-or-miss special effects and empty story just rub me the wrong way.