This is Part 4 of a retrospect of the Millennium Godzilla series. To read previous chapters, click below:

“Toho had a chance to revitalize their flagship franchise as something relevant for a post-9/11 world—and had they done so, they may well have come up with something brilliant, or maybe something stupid or tasteless. They never tried.” - David Kalat (4)

After the success of Godzilla, Mothra and King Ghidorah: Giant Monsters All-Out Attack (2001), Toho had to regroup. Producer Shogo Tomiyama's original vision for the Millennium Series was a trilogy and although there was no continuity between the three films he had produced, the fact remains he delivered three films. But GMK changed things, and after rumors swirled of MechaGodzilla's return Nikkan Sports announced in early March that Toho had been prepping for “Godzilla 2003”. “The reason for why MechaGodzilla will be the opponent will be revealed in the story.” Tomiyama announced, excited about this new take on the machine. (1)(2)(3)

2002 was the year the band got back together. After a stint of outside talent had dropped the most successful Toho Godzilla since 1995 (Godzilla vs. Destoroyah), Tomiyama had decided to bring Masaaki Tezuka (Godzilla x Megaguirus [2000]) back to direct. (2)(3)(4) During GMK Tezuka had stepped down to second unit director on the film and even made a cameo as a JSDF officer. (5) His humble attitude and loyalty to Toho made an impression on Tomiyama, thus he was given another go at Godzilla. (4) 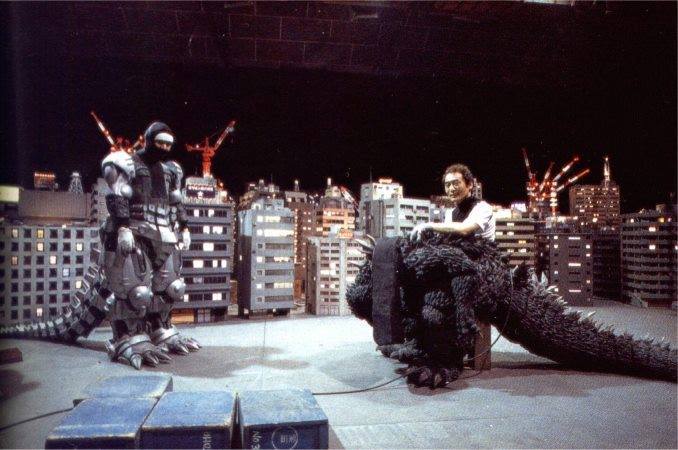 Tomiyama met with Tezuka to talk about the basic premise: The bones of the original 1954 Godzilla are put inside an armored exo-skeleton to create MechaGodzilla. Tezuka was intrigued by the idea, but a script had yet to be written. A new, unnamed writer was initially tasked to pen the film, but it wasn't working. In response, Tezuka and Tomiyama brought in the tried and true. (11)

Screenwriter Wataru Mimura, coming off his directorial debut, Spooky Eyeglasses (2002), was announced as part of the production in April. (7)(8) Returning without co-writer Hiroshi Kashiwabara (Godzilla vs. SpaceGodzilla [1994], Godzilla 2000 [1999], Godzilla x Megaguirus), this would be Mimura's second attempt at a MechaGodzilla concept, since 1993's Godzilla vs. MechaGodzilla II. The process was not easy. “The script for Godzilla against MechaGodzilla was quite difficult,” Tezuka admitted. “We started with the double heroine concept, but it wasn't working for the script. The second heroine ended up becoming the little girl Sara.” (11) 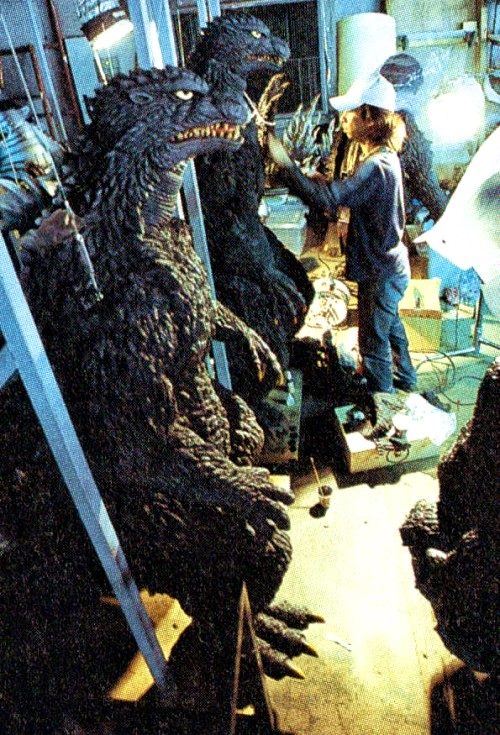 Shinichi Wakasa would return to tweak the design of the first two Millennium movies. (6) Godzilla retained the angular components of Godzilla 2000 and Godzilla x Megaguirus, but Wakasa adjusted the proportions and stuck with traditional colors. He also built the new MechaGodzilla closely based off a design by Shinji Nishikawa. (13)(14) Nishikawa helped design Biollante and SpaceGodzilla as well as Godzilla Junior and the Super X-III. (15)

Perhaps the most welcomed return was composer Michiru Oshima. If there was any consistent praise about Godzilla x Megaguirus, it was the film's pounding score by the series' first female composer. Oshima would bring back her Godzilla theme, but record it outside the studio. Moscow's International Symphony Orchestra gave her new score greater range than what had been heard in Megaguirus. “There is a significant difference in the tone quality between twenty people and sixty people performing,” she praised. (4) 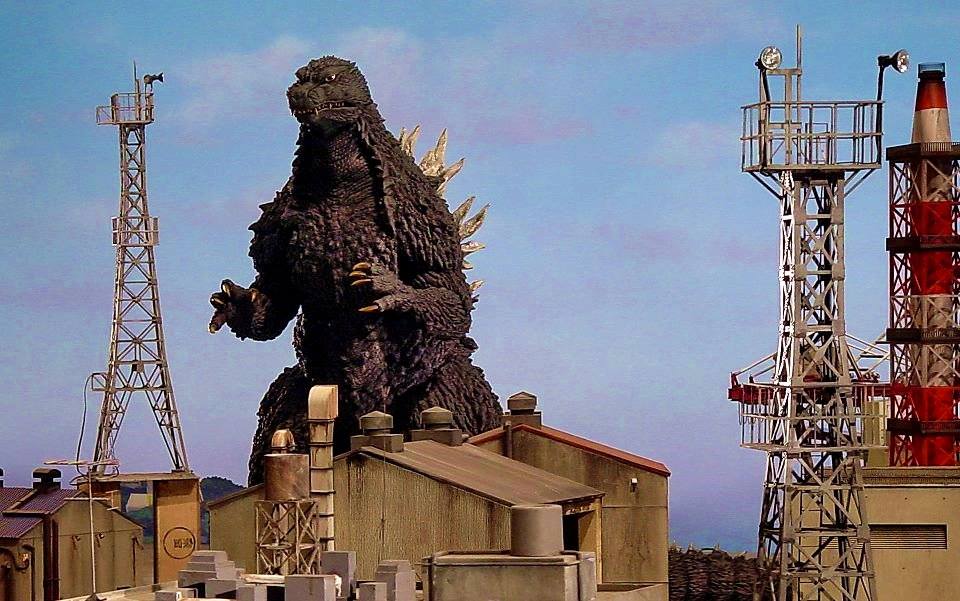 Kikuchi made it his mission to bring back the kinetic fun of King Kong vs. Godzilla's (1962) title battle. (10) Since it was the first Godzilla movie Tezuka saw as a child, he was on board with this. (8)(11) And just like that, MechaGodzilla swung the King of the Monsters around and around by his tail, ala, King Kong.

Godzilla x MechaGodzilla is sprinkled with these little homages by a team seemingly hellbent on recalling better days. With no disrespect, Tezuka comes off first and foremost as a fan and a filmmaker second. Depending on what individuals want out of these movies, the former identity can be understandably attractive. Tezuka loves the idea of monster brawls akin to King Kong vs. Godzilla. He was conscious of characters fighting Godzilla all the way through the end of his movies. (10) He even researched technological advances with DNA for the psuedo-science that brings the latest, sleekest MechaGodzilla to life. (8) Never once, however, is there a point in the film that indicates Tezuka stopped to think why all of these images were important. 2001's Godzilla, Mothra, King Ghidorah: Giant Monsters All-Out Attack worked to give Godzilla meaning. However, the follow-up shoehorned another “life is precious” lesson courtesy of Mimura's left over Godzilla vs. MechaGodzilla II lip-service. Put simply, GMK is an auteur's Godzilla film and Godzilla x MechaGodzilla is a fan's Godzilla film. It is perhaps best enjoyed as a fan who recognizes the nostalgic callbacks.

Remade glances of the 1954 Godzilla, now free of post-war symptoms, flash across the screen. The “Absolute Zero Cannon” nods at Ishiro Honda's Atragon (1963). The original maser tanks return in a shot staged identically to the War of the Gargantuas (1966) set up—All in the name of fan service. The ramifications of the original monster brought back to life are briefly stated as the new MechaGodzilla (christened, “Kiryu”) goes on a rampage across Japan. Otherwise it merely serves as an admittedly fun excuse to build a robot Godzilla—A justification the Heisei Series counterpart lacked.

This was the commercialized Godzilla that could entertain families and it largely succeeded. At a preview screening for the film a young boy cried out during the climax, “What happened to the big girl [Yumiko Shaku as Lt. Akane Yoshiro] in Kiryu?” When all was revealed, the same boy was elated. “The big girl is alive too!” Older fans were less receptive. (8) But this isn't the first time they've had to share with younger audiences.

Once again Godzilla was paired with a Hamtaru film and the double-billing was more palatable. (1)(2) Young Sara Yuhara (played by Shin Takuma) has a central role, giving holdovers from Hamtaru: Ham, Ham, Ham, Marbaroshi no Princess something to relate to. At one point in the film she converses with other young friends, one of which is holding a hamster. (Like Hamtaru.) (4) The inclusion of the rodent is a strong reminder of how hard Toho tried to sell Godzilla. Tezuka originally envisioned an ending with Akane's death and a blood red sea, but Tomiyama vetoed the idea as too drab for a New Year's film. (4)(8)(11) One can easily imagine the same conversation ending with Tezuka being ordered to insert a shot of a hamster. 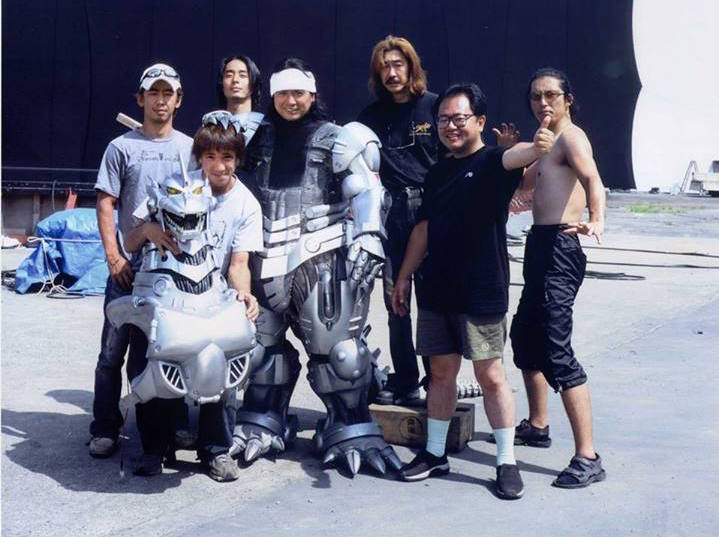 Unfortunately, Toho had overestimated Hamtaru's contribution to GMK's success. When December 15th, 2002 rolled in the results were far from the same. Godzilla x MechaGodzilla pulled in less than both GMK and Godzilla 2000, but did slightly better than Godzilla x Megaguirus. Tomiyama was puzzled as to why it failed to hit GMK's numbers; the fact that a better product – a better film – had been released in 2001 seemed to elude him. (15)(17)

By 2002 fans were still trying to come up with a name for the third era. In the west the term “Shinsei” had been coined, meaning “new birth”, “rebirth” or “new system”, but it never stuck. In Japan it was becoming known as the “X” series, due to the symbol replacing the “vs.” abbreviation in two films. Ultimately, westerners settled on the “Millennium Series”. (12) The concerns of what to name the third series seemed to be a more pertinent topic than what was in the latest adventure. After all, grouping a cycle of films for future reference would be useful. Nostalgia, as delivered by the 2002 episode, wears off.

I have such nostalgia for this movie. It was the first real Godzilla movie I ever watched. I even remember that I watched it subtitled because I didn't know how to switch the DVD to English (I would never watch in English now, though). Going back to it though, it's not my favorite. There are many scenes that come off as awkward, and the script is lacking. Fortunately, this movie looks good and has a great sense of fun. Physics may go out the window in the climactic conflict, but that doesn't make Kiryu slamming into Godzilla at an impossibly high speed any less awesome.