This is Part 5 of a retrospect of the Millennium Godzilla series. To read previous chapters, click below:

"When the dead is at rest, let his remembrance rest; and be comforted for him, when his Spirit is departed." - Ecclesiasticus 38:23, KJV

In hindsight it seems hard to justify a direct sequel to 2002's Godzilla x MechaGodzilla. The film's 1.7 million tickets sold made it the second least attended film of the first four Millennium movies and it was not particularly well received by critics. (1)(2)(3) A couple of things come in to play. First is simply that producer Shogo Tomiyama liked both the director, Masaaki Tezuka, and the film. “I think he did a really good job on the previous film,” said Tomiyama. “I thought GXMG was interesting. Lead actress Yumiko Shaku gave a good performance, and baseball player Hideki 'Godzilla' Matsui was one of the guest stars so I was sort of satisfied with the completed film.” (4)

Secondly, Godzilla's 50th Anniversary was looming and Tomiyama was already spinning his wheels. “I intend to make the anniversary film into a sort of conclusion to all the Godzilla movies ever made.” (4) If a project celebrating Godzilla's birth was to happen in 2004, Toho needed a product in 2003 to give it momentum. Essentially, if not cynically, Godzilla x Mothra x MechaGodzilla: Tokyo S.O.S. could be viewed as a filler project. 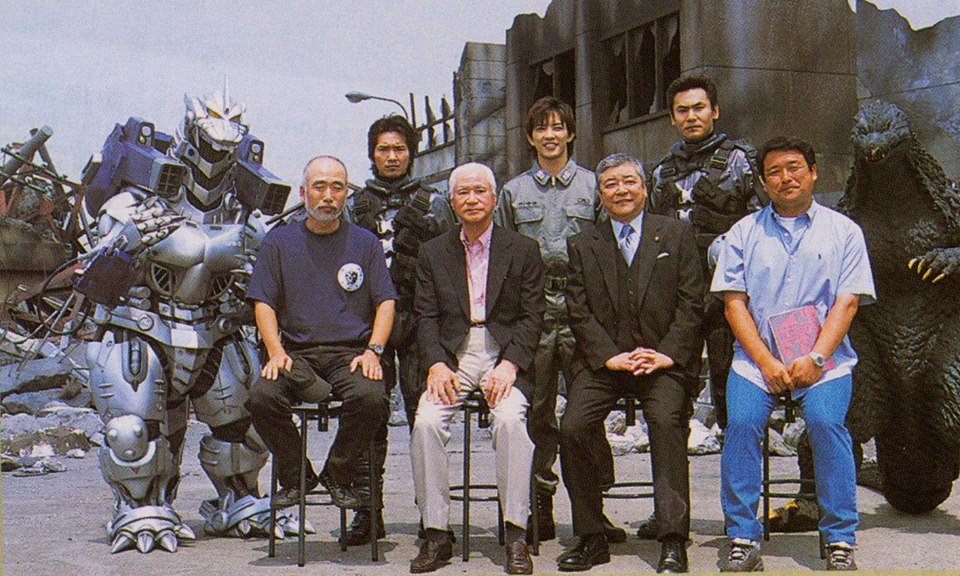 Rumors of a sequel to Godzilla x MechaGodzilla hit the web in late March—The project had long been put in motion and Tezuka was onboard to direct. (5) “Producer Shogo Tomiyama's way was to lay out three or four story treatments and have the director pick one,” he explained the story process. “Again, for Godzilla: Tokyo SOS they had four stories, but they were all really boring. They all felt like Godzilla vs. SpaceGodzilla.” (6) A condemning comment if there ever was one.

Unsatisfied with his choices, Tezuka penned his own story treatment and handed it to Tomiyama for approval. “Because the story depended on [actor] Hiroshi Koizumi appearing I asked Tomiyama to get his confirmation first,” Tezuka was hoping to include Koizumi's character from Mothra (1961); should the veteran actor join, Tezuka would begin writing the script himself. (6) “I had a chance to see Tezuka's plot idea for the film and it was really interesting,” Tomiyama stated, after assuring Koizumi's involvement. “His concept eventually became an impulse to move the project ahead.” (4) 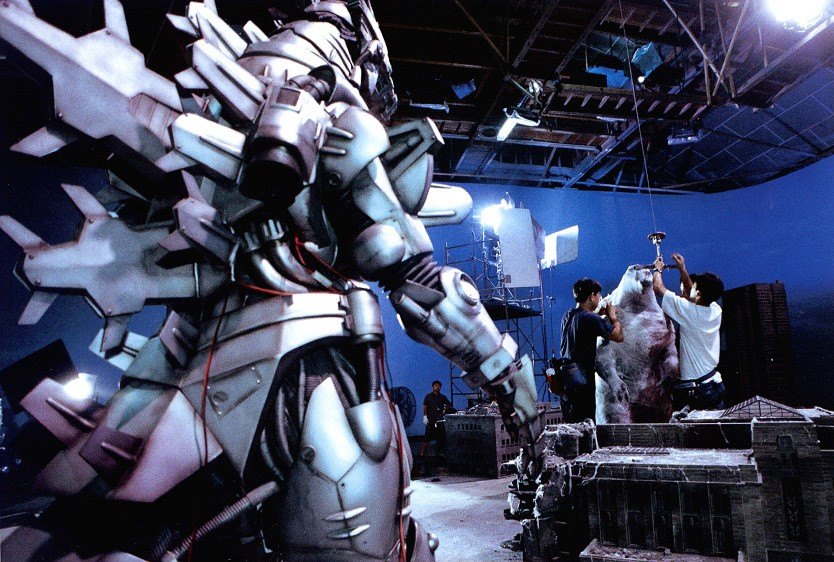 At Tomiyama's request, Masahiro Yokotani (Godzilla, Mothra, King Ghidorah: Giant Monsters All-Out Attack [2001]) co-authored the screenplay with Tezuka. (7)(8) “We didn't have as much time for preparation as usual so I wanted a writer who had physical strength and endurance,” Tomiyama commented on Yokotani's youth. (4)

Godzilla x Mothra x MechaGodzilla: Tokyo SOS was announced in mid-April with a June date for principle photography. (10) False rumors persisted that Tokyo SOS was the second of a trilogy which would come to a close with Godzilla's 50th anniversary celebration. (11) Although a new Godzilla was on the schedule, all eyes were still on the 50 year benchmark. Tezuka's focus, however, was on his own production. 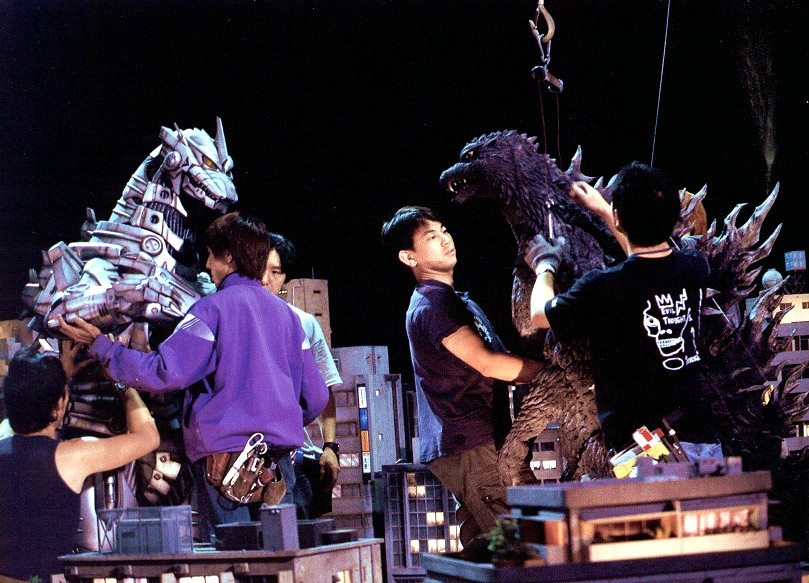 Once again the responsibility of special effects would pass on to someone new. Yuichi Kikuchi (Godzilla x MechaGodzilla) had moved on to work for Sunrise's SD Gundam (2003). Following that, Kikuchi would be busy prepping his magnum-opus as special effects director on Ultraman: The Next (2004). (12) Luckily, Tezuka was more interested in working with someone new. (4) Eiichi Asada was a back-to-basics, no-nonsense effects man who had worked as a chief assistant special effects director to Teruyoshi Nakano on The Return of Godzilla (1984) and Sayonara Jupiter (1983). (4)(13) What he lacked in experimentation, he made up for with meticulous polish. Toshio Miike's (GMK, Gamera 3: The Revenge of Irys [1999]) miniatures return with an added sense of scale, courtesy of Asada's photography.

Because the last film ended with a wide gash in Godzilla's chest, Shinichi Wakasa's new Godzilla suit would include a spider-like scar along the sternum. Falling back on techniques used by Koichi Kawakita in the Heisei Godzilla series, an animatronic head was also built for close-ups of Godzilla blinking and snarling. (14) MechaGodzilla was also modified to look weathered and less heroic for an added sense of realism to the film. (15) Meanwhile a brand new Mothra prop was designed based on the proportions of the original Mothra. (4) Elements of the two most popular Mothra designs from GMK and Godzilla vs. Mothra (1992) were also added to Wakasa's prop. (16) Never one who particularly nailed flying monsters in the past, Wakasa's Mothra has often been praised as the most charming interpretation of the monster since the 1960s. 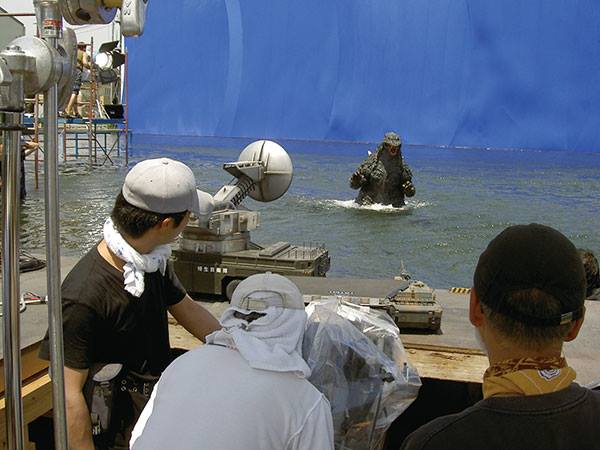 The suits, props, miniatures and overall production values truly shine in Tokyo SOS. Although not representative of the story's quality, audiences know by now to grade Tezuka's movies on a curve. In the realm of ho-hum Godzilla productions, Tezuka's are perhaps the best of the bunch. However, his regurgitating of Mothra vs. Godzilla's (1964) plot line and replacing elements, such as the egg, with MechaGodzilla isn't to be overlooked. In a similar way that Takao Okawara (Godzilla vs. MechaGodzilla II [1993], Godzilla vs. Destoroyah [1995], Godzilla 2000 [1999]) cribbed specific scenes from superior, Hollywood products, Tezuka plays the out-of-ideas card by rehashing a forty year old plot line.

Where the movie goes from there doesn't make up for the creative drought, but it certainly represents Tezuka's most mature work. In a scene where government officials question leading man Yoshito Chujo (Noburo Kaneko), Tezuka overexposes the lighting to enhance the discomfort and isolate the character from faceless suits. What could have easily come off as another bland, staged-for-television office meeting, seen countless times in the Heisei series, is instead a tense interrogation. Just maybe, Tezuka is becoming a filmmaker. 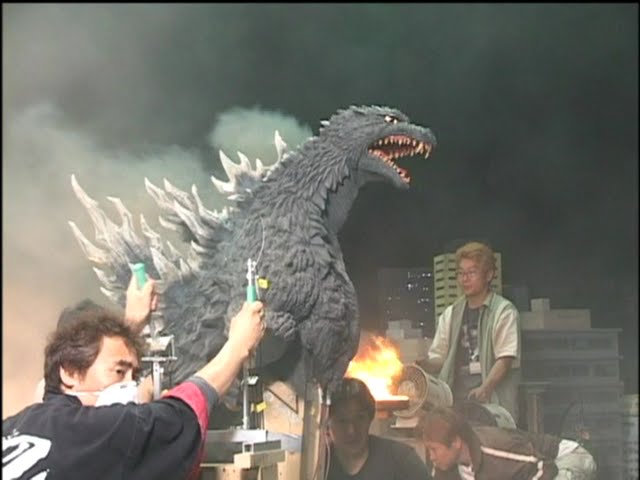 Although negatively affected by Wataru Mimura's (Godzilla vs. MechaGodzilla II, Godzilla x MechaGodzilla) penchant for lip-service themes, Tezuka does a better job of conveying layered moments of thought. In a rather controversial ending, the 1954 Godzilla's consciousness manifests inside Kiryu and drags the current Godzilla into the Japan Trench. “The dead should be respected and left in their natural state. Life should not be unnaturally prolonged,” Tezuka spoke of the screenplay's far from subtle message. Recognizing this, Kiryu sunk both itself (being built over the original Godzilla's bones) and the current Godzilla out of humanity's reach. (17) Godzilla was both a victim and tormentor in the original 1954 film. While Kiryu torched Japan when it became self-aware in Godzila x MechaGodzilla, its actions are largely subdued when it wakes in the sequel. Perhaps the takeaway is that Godzilla the victim is tired. It no longer wishes to be a symbol of post-war trauma and the McGuffin for monster battles. It wants to go to sleep.

In a strange way nothing could be more poignant for a Tezuka-led film. His movies have often been void of great substance and until 2003 he had yet to address why. Perhaps yanking the post-war Godzilla into action time after time (like Kiryu) stagnates a long standing message. Even Shusuke Kaneko had to adjust Godzilla's meaning in GMK and deviate from franchise norms to make the monster more relevant. Unlike his contemporary, though, Tezuka doesn't bother with hot button assessments. His movies left the 1954 monster to rest in peace so he could focus on what made him a fan: Monster brawls and visuals. Regardless of what can be said of his films' quality, Tezuka's enthusiasm was always prevalent on screen.

Another December release date came and went with Godzilla x Mothra x MechaGodzilla: Tokyo SOS billed alongside a third Hamtaru flick. (7) Once again, Toho overestimated the power of Hamtaru as Tezuka's latest became the biggest flop of the Millennium series yet. Normally, a showing of 1.2 million would have put the series away for good. (18) Had Godzilla's 50th birthday not been on the horizon that would have likely been the case. However, the focus was never on Tokyo SOS. A release date had been filled and Toho could now focus on celebrating their once prestigious property. Tezuka, seemingly always high in spirits, was never deterred.

He had written a treatment for the next Godzilla movie, but was unable to pitch it himself. A fellow Toho employee made the proposal for him, but failed to win them over. (6) Tezuka would move on to direct Kadokawa's massive reboot of Samurai Commando in 2005 and the Go! Godman! special in 2008. (19)(20) Years later he remains fond of his experience with the Godzilla series. “Every day was amazing,” he recalled, “I was just thinking about my beloved Godzilla and my characters all the time. My three Godzilla films are like my children.” (6) In 2015 he confessed a desire to helm Godzilla again, should Shin Godzilla (2016) be a success. (9) 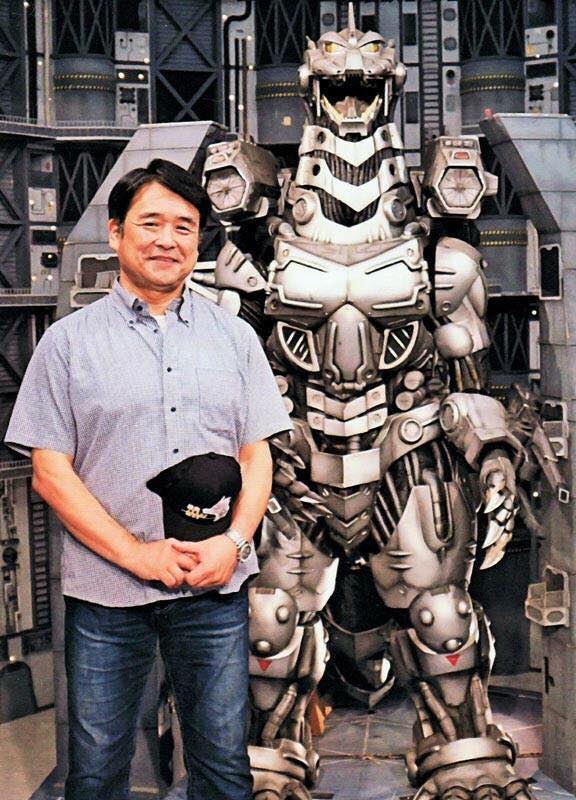 The “Kiryu Saga” was completed. Toho hammered out another Godzilla movie with their in-studio team, but it was time to think outside of the box again. The reach would be far as the most conservative studio in Japan opened the door for one of the most unruly indie directors in modern Japanese cinema. Ryuhei Kitamura had landed at Toho. (4)

You can review Godzilla: Tokyo SOS on Scified by clicking here.

It baffles me that this movie did worse than its predecessor. It's better in just about every way. Sure, it's far from the best that Godzilla has to offer, and it retreads old ground in certain areas, but it offers a lot more substance than Godzilla x Mechagodzilla. I'll gladly go back and watch this one far sooner than its predecessor.