The 16th Godzilla epic and the first “reboot” of the Godzilla series is finally making its way across the pond. After 32 years the original, uncut, Japanese version of The Return of Godzilla will be officially released in North America, September 13th.

Simply titled Godzilla in Japan, the 1984 movie was recut with American footage that included Raymond Burr. Fans know this version as Godzilla 1985, but unfortunately this cut will not be included due to licensing disputes between Anchor Bay and Toho. 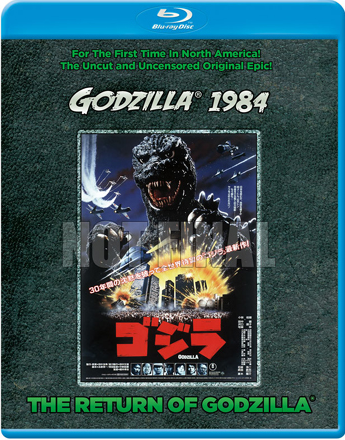 On the bright side, fans can rejoice that the original version of the film will be available for the first time on DVD and Blu-ray, courtesy of Kraken Releasing. It will include the original Japanese language version and the once elusive English dub by Hong Kong based Omni Productions. (Responsible for the English dubbing in the 1980s, 90s and 2000s Godzilla films.) Like previous Godzilla titles under Kraken, special features will be limited to theatrical trailers. Kraken Releasing had recently distributed Godzilla vs. The Sea Monster (1966), Godzilla vs. Hedorah (1971) and Godzilla vs. Gigan (1972) on both DVD and Blu-ray.

The original reboot of the Godzilla series played as a direct sequel to Ishiro Honda's 1954 masterpiece and spawned six direct sequels known by fans as the “Heisei Series” or “VS Series”. Director Koji Hashimoto channeled the atmospheric anxiety of the Cold War, bringing Godzilla back as a challenging threat for a nuclear powered world. The film also marks Teruyoshi Nakano's (Godzilla vs. MechaGodzilla [1974], Terror of MechaGodzilla [1975]) final special effects work in the Godzilla series.

Although it's unfortunate that the release will be without the Raymond Burr cut distributed by New World Pictures (no relation to New World Cinema distributing Godzilla Resurgence), it's exciting that fans will finally have the opportunity to see, and own, Hashimoto's original take on the Godzilla legend. Kraken Releasing sends The Return of Godzilla to the market, September 13th, 2016.

2020-08-13 17:26:17 The new Monsters in Godzilla vs. Kong collide in this epic new fan artwork created by the talented Aaron Dwyer! Shared moments ago to Twitter, the following fan art depicts a clash... Read More

2020-08-12 19:05:21 The upcoming fourth installment in the Monsterverse Godzilla vs. Kong May be getting delayed yet again. Yesterday, AT&T CFO John Stephens commented on the company's upcom... Read More

2020-08-12 17:48:17 New images and information for the upcoming NECA Godzilla 1989 Biollante Bile figure have been released. The images showcase new looks at both the packaging for the figure and of t... Read More

12 Fan responses to Finally! The Return of Godzilla Comes to North America on DVD/Blu-Ray!

My God... I never thought I'd live to see the day.  I'm too in shock to let my excitedness (which isn't a word, but hey, it works in this situation!) sink in.  This has been one of my favorite Godzilla films for years.  The original cut is one of the series' crowning achievements, and in my opinion, the true sequel to the original 1954 epic.  Its taken over three decades, but at last fans who haven't tracked down the Japanese cut like I did will have the opportunity to enjoy this incredible monster film.

Although I'm disappointed that "Godzilla 1985" wont be included (which is, as far as I am concerned, the poster child for illustrating the differences between the Japanese and American edits of the Godzilla films), the presence of the Hong Kong dub more than makes up for it, as I have actually never heard it!  Furthermore, this is one of the few Godzilla films I don't have a Blu-ray for, so even though I have numerous copies of this film in multiple versions, I will gladly be forking over the money to add this baby to my collection!

Rejoice, for at last, EVERY GODZILLA FILM WILL BE AVAILABLE ON DVD IN NORTH AMERICA!!!!  AND IT'S ABOUT TIME!

Well it's about time! Now I can complete my collection

Yeah, I'm pretty sure I thought I'd be dead before this movie was released here. I had all but given up on it.

Definitely one of my favorites. Glad it's coming out because my VHS isn't in as good of shape as it used to be.

One of my favorites! Very excited to own this on Blu-ray!

Wow is it strange this surprised me more than when we learned Toho was making another Godzilla movie last year?

^No. It shocked me to around the same level.

I actually had the Japanese version of Return of Godzilla, so cool for it to be in North America finally.

I have a really old DVD boot, but a legal Blu in North America is too huge to pass up. Hopefully it looks as great as Kraken's other releases.

I too plan to get it, God willing. The excellent making-of feature would have been a nice touch, not to mention, fun to watch. Matt Greenfield said that Toho "was not able to clear" other features in time. Exactly, what does this mean? I am happy that this film is finally officially released in North America. To me, it's indisputably superior to the American re-edit, a re-editing influenced by the politics of the Cold War.