Recent news coming from Tom Hiddleston that next year's Kong: Skull Island movie will be a blood relative to Gareth Edwards' 2014 monster blockbuster Godzilla is not only promoting the King Kong reboot but is also adding to the hype of Legendary Pictures' planned Godzilla vs King Kong, which is scheduled for release in 2020. Although four years away the monster face off has a lot of cinema, monster and kaiju fans excited, with much speculation being thrown around by fans as to how the confrontation will be adapted for modern audiences. One such speculation is that the character of King Kong will need to be vastly increased in size to be comparable to the 2014 rendition of Godzilla, but with Hollywood's latest iteration of Toho's King of Monsters coming in at around 350 feet tall, that means King Kong will have to grow up to six times its normally depicted height, with most renditions of the King of the Apes averaging around 50 feet tall.

That said in his 1954 debut Godzilla was estimated at just over 100 feet tall, making the original 1962 face off against King Kong more believable and more plausible, given the two creatures similar sizes. Kong: Skull Island, which is currently in production in Hawaii, will likely introduce us to a larger scale version of King Kong that is comparable to 2014's Godzilla. While the suspension of disbelief from audiences can be stretched to accept a 350 feet tall amphibious lizard having survived since before the time of the Dinosaurs, can Legendary Pictures really expect the same of a colossal ape that has lived hidden on a small island, likely too small to even sustain the creature. Put simply; in their haste to make a big impact on the big screen screen and at the box office, have Legendary Pictures made their iteration of Godzilla too big? 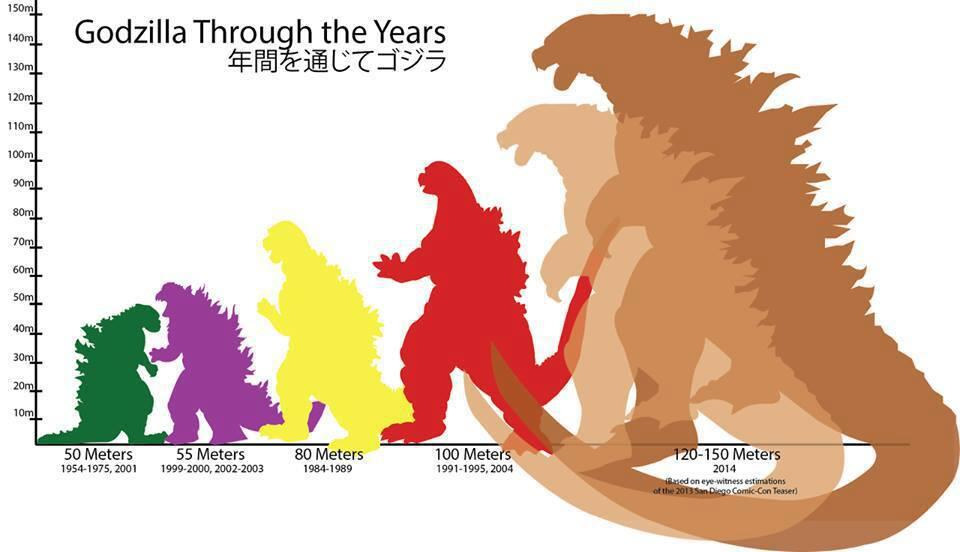 In addition to next years Kong: Skull Island and 2020's Godzilla vs King Kong director Gareth Edwards, whom has been working hard on Rogue One: A Star Wars Story, which is due for release this Christmas, is expected to helm a sequel to his 2014 Godzilla. The sequel, scheduled for a 2018 release is believed to feature Toho mosters Mothra, Rodan and King Ghidorah, with the latter likely to be depicted as being much larger than Godzilla, begging the question of how much bigger are all these monsters going to get? Some audiences find the plausability of such monster movies a stretch too far, and while we could argue it is all just a bit of fun, making these monsters ever bigger is likely turning away prospective audiences that could otherwise have become new fans of this legendary form of Japanese cinema.

2020-09-16 13:28:07 A plethora of new Godzilla themed T-shirts are being re-released by Bandai Fashion Japan. There are two different types of shirts that will be available. First off are new Godzill... Read More

2020-09-16 13:04:48 The first official poster artwork for the new Godzilla Store in Osaka has been released. Following the success of the original Godzilla Store in Tokyo, TOHO recently announced thei... Read More

9 Fan responses to Is Gareth Edwards Godzilla too big?

no. it depends on how far one is willing to stretch their imagination.imo.

Says who? What is this based on?

"making these monsters ever bigger is likely turning away prospective audiences that could otherwise have become new fans of this legendary form of Japanese cinema."

With great size comes mass and power. The kaiju in Godzilla and Godzilla 2018 are, and will be, not only actual creatures, but they are symbols of other fears and forces.

I found Godzilla in the 2014 film to be just about the right size, especially given the surroundings he was in: the Pacific Ocean, San Francisco, along side the Golden Gate Bridge.

While I disagree that the massive size of these beasts are putting off audiences (I doubt general audiences take much notice), I think the larger monsters work better in American productions from a visual standpoint.

Japan's effects work with kaiju is best represented when the monsters are at a smaller scale. This leads to more detailed, larger and more convincing miniature work. It's the quality of these miniatures that make these monsters look like they're really in the city. Comparing the set work from Godzilla vs. Mothra '92 to Gamera: Guardian of the Universe is a great example of this. Some of that could be chalked up to the talent of both films' effects directors, but Gamera's visuals were stronger due to smaller scale monsters surrounded by far more detailed, upscaled miniature work.

With American productions, I feel like it's easier to conceal these details through CG if the monsters are larger. Depending on the shot these massive kaiju could mean less attention to the smaller details necessary in tokusatsu.

A lot of this is a fairly vague observation, granted, but the differences in what's most effective for both Hollywood's representational style and Japan's tokusatsu seem to ring true.

We don't know how big Kong is going to be this time yet. We can't say Godzilla is too big until we know how big Kong is. In 1962, King Kong was made 50 meters to match Godzilla's height. Kong will be big enough to fight Godzilla. If he's a few meters short, it won't matter. As long as Godzilla and Kong are close in size to one another, then it's all good. Just let them fight.

It hasn't hurt Godzilla, as much as possibly hitting kong story wise. Kong has always been strongest as a character when paired with a human. The larger a monster gets the more it strays away from its interactions from humans. The interactions of Godzilla and the Muto with Ford were pretty much the most you could have. They'll have to make Kong a lot smaller, or possibly younger in his solo movie which takes place in the 70 so maybe they can pull something out

"Says who? What is this based on?"-Jamaal

I've seen many people in comments say that a Kong beefed up to Legendary Godzilla's size would be ridiculous.