In a bizarre, and yet not completely unexpected, turn of events, New World Cinemas now claims they are not distributing Godzilla Resurgence and never were.

The New World Pictures website even put the Gephardt Daily article on their front page, seen below:

Later we clarified that there was no confirmation that Godzilla Resurgence wouldn't see a theatrical release. The same day, New World Cinema's Facebook updated with the following plan: 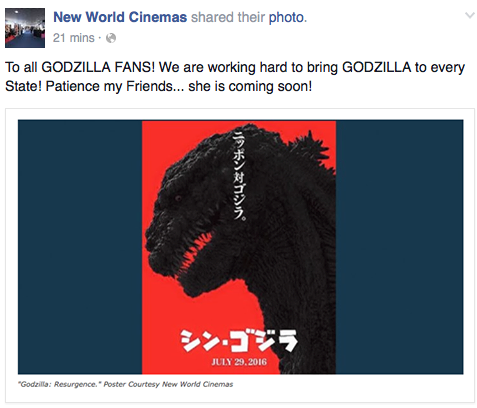 When asked by members on Facebook about more information they simply responded with,

“Soon we are doing all the strategy works right now.”

Apparently that strategy did not include clearing things with Toho. Over this past weekend New World Cinemas posted this to their Facebook page:

We want to clear something up for you as it is causing a lot of speculation.

New World Cinemas are NOT the distributers for the new Godzilla Film. The mistake was make because we said Godzilla coming soon. This was merely a post to promote Godzilla as we too are big fans.

We apologise for any confusion regarding this film. The Original post has been edited so it cannot cause anymore misunderstandings.

We accept that due to being busy in Cannes and preparing for our first annual Fright Fest Film Festival by NYCIFF we have neglected to notice the buzz on our Facebook page, however our admin team are back on track and will bring you all the latest news about New World Cinemas

We wish you all an amazing weekend.”

They also replied to one fan, claiming, “We are currently investigating all posts that have been put up regarding the issue.” It seems that “investigating” the problem included removing their “explanation” entirely. However, you can see the screenshot below: 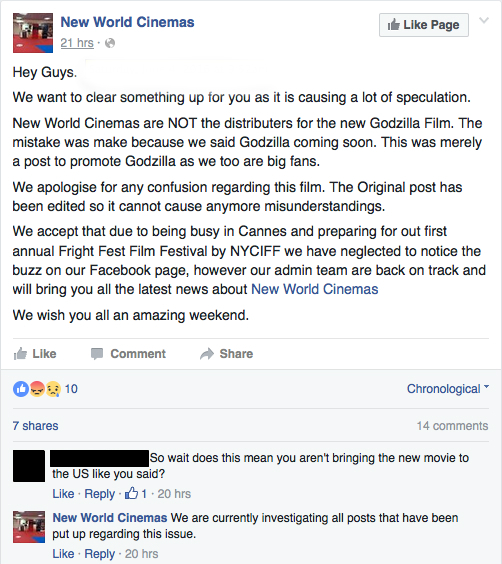 So they allowed news outlets to think they were distributing the film, posted said articles on their home page and announced a hope to get Godzilla Resurgence to “every state” simply because they were hyped about the movie and are also fans? Perhaps they took down their clarification piece to come up with a more believable explanation for their actions. The Gephardt Daily article has of course been removed from their front page, as has the “Godzilla 2016” page they had. Most of the posts about Godzilla Resurgence have also been removed from their Facebook page, save for a couple: 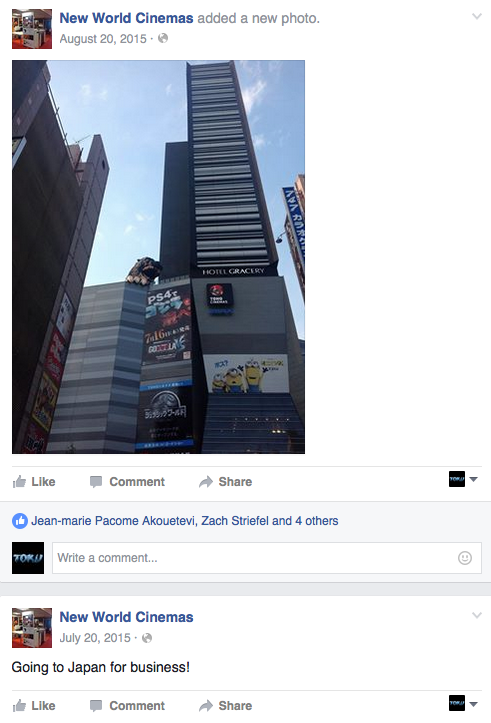 Our friends at Tokyo Lives had a fairly thorough article about the rather strange acquisition of Godzilla Resurgence under New World Cinemas. They question the likelihood of a little known distributor having bought the rights for a new Godzilla when Toho has dealt with distributors such as Sony, Warner Brothers, New Line Cinema, Classic Media, ADV, etc. (Of course they've also mingled with the likes of Media Blasters...) As unlikely as it seemed that New World Cinemas had acquired Godzilla Resurgence the fact is, at the time, there was no real reason to question it. Toho has rarely, if ever, announced deals with overseas distributors themselves and false claims like these are normally met with Toho's lawyers carrying a set of intimidating legal mallets. Considering New World Cinemas isn't well known, perhaps it just took longer for this situation to get on their radar.

Regardless, Tokyo Lives' assessment was correct. New World Cinema's claims have been poorly communicated and fishy from the beginning.

Whatever the case may be, accidentally or maliciously, New World Cinemas has not been honest to fans about their involvement with Godzilla Resurgence. It appears they will not be distributing the film to North America and they seem to be determined to cover up their issues by strengthening their relationship with the delete button.

On the plus side, perhaps now Godzilla Resurgence will get a distributor that inspires confidence. And maybe, just maybe, we'll get a North American distributor interested in releasing the movie to western audiences before the year is over.

I'm sorry, what?... There is no way in hell they could've mistook their own words. And to contradict themselves saying they're investigating their posts about the film? Please... this has been promoted by them for months. What a bunch of idiots. Whoever runs their social media needs to be fired.

One of the most absurd things I've come across in a while. Just positively assinine. Excellent & informative article GMan!!

This isn't really surprising, and, it's actually good news. New World Cinemas just didn't seem up to the task. Nothing about them: their Facebook page, their website, their rants on Twitter, seemed very professional. I had some apprehension about what they might do to the Japanese original version of Shin Gojira. So, I'm kind of relieved. There are other distributors out there, like Media Blasters/Tokyo Shock. Their release of Shusuke Kanekos's Pyrokinesis includes an interview with the director, a commentary, trailers, the making the the special effects and biographies of the cast and crew. I don't know how their other releases have done, product-wise, but I would happily take a release of Godzilla Resurgence that was comparable to that of Pyrokinesis.

So, this is actually good news. Here's hoping we get a well-done release, with a few extras and a presentation that is respectful and done with care. This is the best news I've heard all day! I was shocked that this unheard of (at least by me) company was handling distribution and their bizarre statement about getting it to "all 50 states". Their postings all read like lame translations from another language. With the popularity of G '14, I may not expect a theatrical release, but would at least hope for a solid BluRay from a reputable name.