Yesterday at 4:50pm, the official red carpet celebration of Shin Godzilla took place in Tokyo, right under Hotel Gracery Shinjuku, where Godzilla's head peers over. Known outside of Japan and North America as Godzilla Resurgence, the 31st film in the franchise premiered after the event.

The premiere's "Godzilla Road" was the length of Godzilla's height, 118.5 meters, commandeering Kabuki-cho Central Road. Marching down the red carpet in attendance was director/writer Hideaki Anno, co-director Shinji Higuchi and much of the cast and crew. 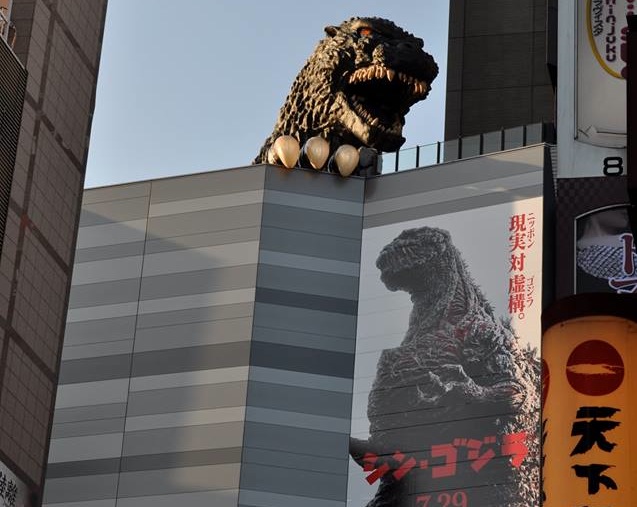 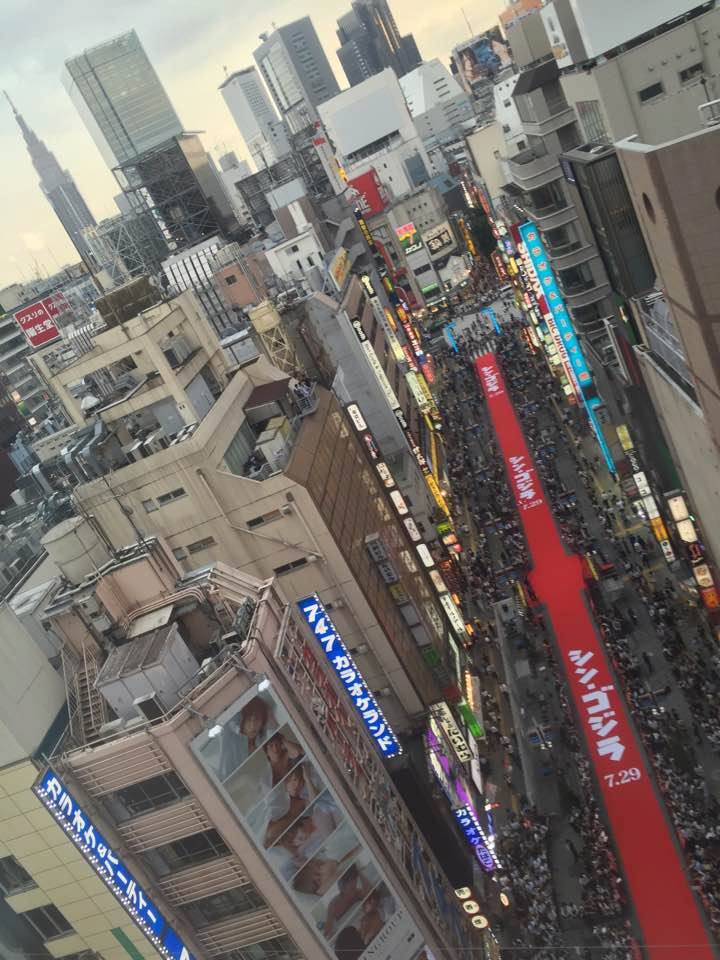 The event was streamed live for fans anticipating the film opening this Friday. Fans who were lucky enough to participate in person were greeted by the cast and crew during their 118.5 meter stroll to the film.

Fans who missed it live can watch the stream here. 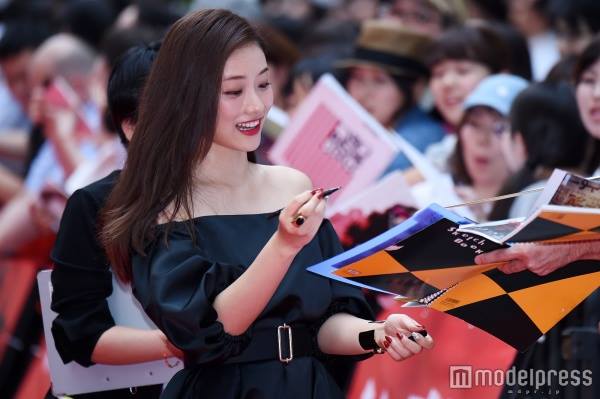 Great to hear that the initial response to this film is positive. While I'm sure Godzilla fans like myself will always enjoy a Godzilla film, I'm still waiting for the one that blows me away. Maybe this will be the one.

Glad we're getting it this year so we don't have long to wait.

Ready to be jealous?

I'm currently staying at the Hotel Gracery, and walked outside during the premier.  I didn't get too close, but I did see Hideaki Anno walking the carpet.  He was only a few feet from me!  It was surreal.

Stay tuned for more updates from Japan as my week here continues!

^You need to start blogging about this.

^^ I second that, Danzilla! Mad jealous over here haha

DANZILLA - I am so very happy for you! Please keep us updated! :)

DAVID_THE_KAIJU - With the vulgar attitude you evidence, I doubt you would ever receive the chance to stand within fifty feet of Miss Ishihara - much less attempt the act you have so eloquently described.

Danzilla, my envy knows no boundaries.

Something Real now confirmed to be 100% a savage. You go girl. xD

@David_the_Kaiju - Is that your "Please ban me from this site for infinity" post? I mean really?

Sorry to make everyone jealous!  This has truly been the trip of a lifetime.  Yesterday was the best day of my life, hands down.  Visiting Toho, Daiei, Ultraman Street, and eating dinner on a cruise next to Akira Takarada and Hiroko Sakurai will do that. ;)

I'll be sure to post more info on the atmosphere here in Japan surrounding the film when I can.  I hardly have any time to rest, and internet for only a few hours each day.

Some small things: Shin Godzilla posters are in a lot of store windows.  The presence of the film via promotion is there, but not as much as the normal Hollywood film.  There are a LOT of books, magazines, and toys around too!  The presence of Godzilla can be felt all across Tokyo.

Also, I chatted with someone who was privy to seeing a rough cut for review several weeks ago, and reports that all the practical scenes seen in the trailers are not present in the film.  The effects appear to be all GCI, or suit/puppet work that has been animated over.  Doesn't make me ANY less excited to see the film, but I thought it was an interesting tidbit worth sharing.

I will be seeing the movie opening night in 4KX IMAX.  I'm speechless with excitement!  I feel with all of my heart that this film will be something special not just for Japan, but for the entire world.

Stay tuned for more info in the coming days!

@Danzilla - That's fantastic! Wish I was there too. Japan is on my bucket list. It was one of my Dad's favorite places when he was in the navy. Look forward to hearing your review.

http://augustragone.blogspot.com/2016/07/shin-godzilla-is-coming-to-americas.html  It's coming to America the end of this year!

David_The_Kaiju,
Pull back the vulgarity. You've been warned.

Everyone else, move on.

Hello Something Real. How's everything? Hope all is well and your summer is going good. Lots to get excited about. Can't wait to hear Danzilla's review of Shin Godzilla (from the Land of the Rising Sun!) This boy is jealous!

KOLDWARKID62 - I am quite well! Thank you so much for asking! :)

Can't wait to see this when it comes over here.

I'll have to see it for myself before making any judgments, but I stumbled across some info about it that, (if true), could leave fans somewhat divided. What I came across were from Western fans who had seen the film. They all had great things to say though, in general. I'm curious to see what Danzilla has to say after he sees it today.

I don't know about Japanese cinemas, but are the movies subbed in english upon release, or is that something that will be added when it comes to other countries.

^It will be subbed hitting other countries.

I repeat, Shin Godzilla will be shown in North America (and other countries) towards the end of the year! Funimation bought the rights to release:

PS, by it being released by funimation, there is an great chance of it being english dubbed (with subtitles if you want to play in japanese language)

Scarfo,
Thank you, but we already reported on FUNimation getting the rights 11 days ago. You can read our article here by clicking here.

Tyrant King,
I don't doubt that FUNimation will release a dubbed version on home video, but for a limited theatrical release (which is the only kind of release FUNimation's film division has ever dealt with) it will likely be subtitled.

The Attack on Titan movies, which were also produced by Toho and with roughly the same crew as Shin Godzilla, were released to limited North American theaters subtitled. The reason being is that these limited releases are specifically targeted at the fans.

One thing that is probably unlikely is the idea that FUNimation will dub Shin Godzilla from scratch just because they dub anime themselves. We'll get an idea about that when Attack on Titan Part I is released on DVD/Bluray this October, but think about it:

Toho has all of their movies dubbed by a Hong Kong company called Omni Productions. Why would FUNimation spend more time and money on creating their own dub for Attack on Titan and Shin Godzilla, when they could just use the Toho sanctioned Omni dubs? They already have enough anime to work on. And considering how bad Omni's dubs are, it makes sense to save it as an option for home video and go the subtitled route theatrically.

^Thanks, although I'm Lord Tyrant, not Tyrant King lol