Will Godzilla fight Gamera in the new series?

There was been rumor,s that Godzilla Will fight Gamera but the 2 most popluar monsters never got too face each other so Could Godzilla and Gamera fight it out in the new Movie series? well the question is will Gamera bs CGI? we all no Godzilla will be CGI in the new movie but what about Gamera? well there are some diffeneces for gamera too be realistic he might have too have a few upgrades one It,s size two it,s new roar and three he,s weapon now If Gamera wants too fight Godzilla Gamera might have too have new fire balls so my personal fire balls for Gamera is Very red and very Dark like dark red and the fire ball should do more damge now for the look. so there was no Pictures of Gamera in CGI but i do got a clue of his CGI look so A CGI gamera will have too make his face more serious and more angry And the big teeth should be more 3D so thats my look for Gamera in CGI so what do you think should Lengandary make a movie about Godzilla facing Gamera do you want these 2 famous monsters go head too head with each other?

and also THIS IS NOT ABOUT THE CLASSIC GODZILLA it,s about the Godzilla 2014 movie i pressed Classic monster by mistake

PICK YOUR TITAN
19 Responses to Will Godzilla fight Gamera in the new series? Umm, no... Legendary did not acquire the rights to Gamera or any of the other Daiei monsters...

a monster that is a homage to gamera maybe but not gamera himself.

No they won't. As Godzillasaurus said Legendary didn't get the rights from Daiei to use the monster and I doubt they think he's profitable enough do it. Gamera isn't very popular in America anyway.

Besides that, Toho has never had any interest in making a Godzilla vs. Gamera movie and they certainly don't want to risk boosting Gamera's popularity by debuting the concept in a mega-budget, Hollywood feature film.

gman, I believe Toho even told Daei that they don't want their monsters in the same movie.

There will probably never be a Godzilla vs Gamera movie.

Is it something that I'd enjoy? Yes just to see godzilla kill that turtle Ripoff(not to say Gamera doesn't have enjoyable movies too), but it's never ever going to actually happen.

People have been asking why there is no Godzilla vs Gamera film and now they just forget about but i no that lengendary might ask daei for a G vs G movie :/

I've heard some sort of variation on that as well. I know Daiei has always wanted to do a Godzilla vs. Gamera movie, but Toho's had no interest at all. Daiei may have asked in the 1990s, but Toho turned them down.

I'm not sure why you think Legendary would pay for the rights to Gamera, but you have to understand Toho would have to say yes to the idea as well and they won't. That risk giving Gamera too much exposure and Toho doesn't want to help a competitor out. The idea has to approved by Toho, Daiei, Legendary and (yes) Warner Brothers. Four studios agreeing on something isn't likely to happen.

Yeah, I don't think that there will ever be a Godzilla VS. Gamera movie. I just don't think it would work because each company would want their monster to win, and it would become a large argument that drops the movie completely. Dude, im on your side bro....i beleieve there will be a godzilla  vs gamera someday... and yes on how u said something about them talking about that concept, i ve heard it too bro

lets just hope there will be that movie someday

I would love to see Godzilla vs. Gamera one day, but I doubt it will happen. Like Gman said I don't think Legendary would see any reason to as Gamera is not a big name in the states. But my main worry for if this film ever happened would be Toho handeling it. Personally I would prefer Daiei to make the film and that certainly wouldn't happen. 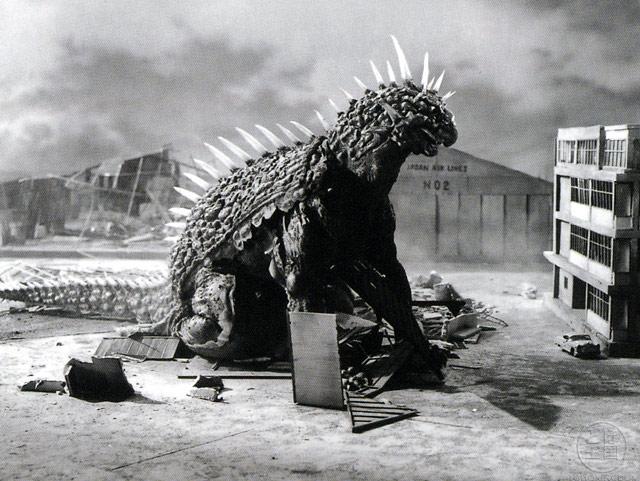 That would be highly unlikely.

Gameras fire breath is weak and he never kills a single fule sized oponant with it in theold movies but, a bodyslam from space or a mock 7 batting ram is another situation all together.  That earthpowered belly blast against liegon is also awsom.

Not of equal status?, shoot,most of GoJis's aponents were previously unknown. And do you think Ebera or Kumonga are somhow tougher than Gamera? Mothra LarvaeMember0 XPDec-20-2013 5:31 PMI'm afraid not. Gamera is owned by Daiei, a completely different company than Toho who (as everyone knows) owns Godzilla. Legendary has ONLY been allowed to use Godzilla in their film and NO other kaiju (so far as we know). To most G-Fans, a GvsG film would be the ultimate dream, but to be honest it will most likely NEVER happen...and honestly I'm fine with that. Gamera is the champ of his universes and Godzilla is the KING of his. Now just so you know, Toho DOES have a turtle kaiju by the name of Kamoeba/Kamoebas. He has been in 2 films: Space Amoeba and Godzilla Tokyo SOS. Now IF (and I stress that it is a big "if") Toho does decide to let Legendary use other kaiju in any future sequels/installments then this would be the only way we could ever see Godzilla fight a giant, mutant turtle.

I hope they don't share a movie together. I think it's up to the fans to decide who would win. :)

hey guys, maby im the only one who would dare consider this, but what about a team up? godzilla has worked with other kaiju on many occasions to stop insvasions or monster attacks" such as working wiht angurius against megalon", and being Gamera is smart and a protector of the balence much as godzilla is often in films, i see no reason they wouldnt work together against a far greater and dangerous foe" like a interdeminsional allien/supernatural creature" that can some how bridge a link between the earths" like a cross over" or that enters our reality to wage havoc and war, forcing a complete extinction event on earth if the two king kaiju dont work together to take him/it down. i mean we havent had creatures that were not just alien but interdimisional or beyound our realm of understanding" engery creature, partialy incorporeal, special powers, ect", and would need the magic and spirit power of Gamera to seal the entry for the monster and its evil kind and weeken its powers, why godzilla would keep it bizzy and lay into it with his powerfull healing and attacks. could even have them split up at some point as multiple breaches are occuring across the globe and forcing them to cover more ground, even bringing in there friendly monster allies to help in this endevor" as everyone/everything dies if they fail". would be massive money maker, would look great ...i mean GREAT... on big screen if done right, and would allow two worlds to colide in a way where everyone wins and it is truly original idea and concept for enemy monster/monsters and a way/reason why you would ever see gamera and godzilla in the same film let alone universe" i mean gamera is a space traveling entity, could work that into his arival and consequent battle/team up with godzilla once they realize who the real enemy/threats are". could even get some good Super kaiju face off action going with out starting a Company war against daiei and Toho, cause the extra planar abomination could have mind altering/manipulating powers that godzilla would have to over come or something along that note. problem is, buisnesses are not creative enough or chancy enough to run with any out side the box idea or cross over cause of there own pride and fear of helping the oposition, though realy, as said before, Daiei realy wants to build good relations and have monsters cross overs with Toho, and Toho would only GAIN MULA" lots and lots", by doing so, not loose buisness to a friendly competitor" who is sitll way behind in ratings and cult fandom compared to Godzilla". godzilla would still carry the movie at times and would not be over shadowed, if anything, making Gamera able to stand on equal footing in the flim would require Daiei to up there game and improve both companies Stock values when the film HIts the big screen. godzilla would be in no way in danger" unless they totaly botched the film", and would gain far more out of the deal then Daiei, who are the ones asking to make it happen. i mean if it became common practice, godzilla and gamera might finaly become massive on the global scale as they" at least godzilla" used to be and create a truly godlike Kaiju universe no one anywhere else could ever hope to compete with. they would dominate the giant monster scene and when you think of game opertunities, there is more then enough money to be had for everyone. its a win win...so Toho, if your reading this, listen to the fans and your wallets and make it happen.

Oh, and as for companies not working together to make such a cross over happen? what about when godzilla faught King kong? to very diferent, equaly iconic monsters as well as companies owning there rights, yet it happend. not cause it was nesasarily a great movie or allot of pressure to do it, but because of the money money money it brought it for both groups at the time.

It's not impossible, but it's highly improbable. You'll just have to be satisfied with fan-cut videos and... well... this https://youtu.be/iMOl-amah8w

Trending Articles
Forums & Community
Will the new sequel Godzilla and Kong most likely involve romance or not? 2,514
Is this real? 582
Predictions for Godzilla 3? 1,075
LEGO Kiryu is running out of time! Please support now! 930
Are godzillas thigh fat 1,680