so we all know that final wars goji and burning goji are pretty much the godzillas who can give out the most punishment. however i was thinking about wich version of godzilla can actually TAKE the most punishment. heres what i think. although not the most skilled, largest, or strongest incarnation, i thinck that godzilla in godzilla vs megaguirus was the toughest. why? simply put, not even a black hole gun could stop him. in fact, i think he would probably be able to outlast final wars goji in a fight. so now, what do you thinck?

PICK YOUR TITAN
13 Responses to the toughest godzilla

No way the Godzilla from Godzilla vs Megaguirus is the toughest. He was up against a miniature black hole and both times it was shot it wasn't targeted directly at him. That and megaguirus who is extremely weak when compared to other enemies did fairly well against him.

If you're going for tenacity then it would be showa Godzilla. How many times was he beaten to a bloody pulp but still got up and kept fighting? True he may have been the weakest offensively, but he could take a beating and keep fighting every time.

I believe the Godzilla from Terror of MechaGodzilla was the toughest he took alot of punishment going up against Titanosaurus & MechaGodzilla & he had alot balls & skill to keep fighting, Definetly also very strong, he was sort of like a Gorilla in that film, same goes for also in the 1st Godzilla Vs Mechagodzilla film. That Godzilla was just a BAD ASS!!

Sorry about that, I just spent 20 GODDAMN MINUTES writing a post detailing all the reasons why I think a certain Godzilla is the toughest, and when I clicked "add reply," a message appeared saying I had to be logged in to post a message, and I WAS F***ING LOGGED IN, OTHERWISE HOW COULD I EVEN WRITE THE GODDAMN MESSAGEERJDOIFHNSIFOHIFRE!!!

Fine, I'll just say GMK Godzilla and leave it at that, YOU WIN, SciFied!

P.S. Has this ever happened to anyone else? @LINKZILLA I was just thinking GMK Godzilla too. He took out Baragon, Mothra & King Ghidorah. He also walked through a mountain.

Then again there was this... 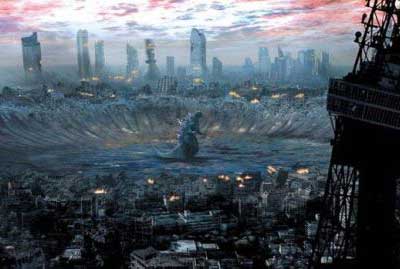 Happens all the time. I typically copy my posts before I hit reply. Just in case.

to go along with my black hole argument. no matter the size a black hole, it is a black hole. this is because a singularity is an infinitly small point of infinit mass and thats the same for every black hole. the only thing they somehow made small in g vs megaguirus was its horizon(or is it event horizon?). basically they focused it, however that would not reduce the power of a black hole. also the only reason megaguirus lasted so long is because he was swift and could avoid lots of godzillas attacks. also, i must agree that gmk godzilla was among the strongest godzillas ever( mean looking too), but remember, this is about durability, of course you could reason that even though he blew up, gmk godzilla can still regenerate and come back.

Hm that's a tough one. I'd have ot say between GMK Godzilla and FW Godzilla. GMK Godzilla fought and took a beating from all 3 monsters (not really counting baragon and mortha) and blew himself up but STILL lived, that's pretty BA. Then there's FW Godzilla who fought a very good amount of monsters AND took an astroid blowing up right above him AND taking on kaiser Ghidorah, that is a feat in itself.

I believe that the Godzilla from the Show era and the final Wars Godzilla. :)

The GMK Godzilla was indeed tough, however he was possessed by the souls of those who died in 1954, so one can expect him not to die so easily.

Wow this is an interesting question...I thought about this all day because there are so many variables involved here. The arguement about Godzilla vs Mechagodzilla is a solid one, however Ive never thought much of Titanasaorus...he was about as lame as King Cesar lol..of the Heisei series I would have to give it to Godzilla from Biollante simply because he swam a Lava river to reemerge...tough to top LAVA....The Millenium series...I have to give a slight edge to The Final Wars Godzilla over Godzilla 2000 simply because he takes on every single monster in the series and then survives a meteor landing on top of him. Godzilla 2000 was being sucked dry by Oragnaizer G-1 and he simply turned up the juice lol as it were....heres the clip of the meteor assault...nuff said

He was over the top, and im not saying thats good, but he still kicked ass.

I think burning Godzilla was the toughest...yes he did die but let's think if he could control that power...he is also the tallest so far and even though is not nearly as brutal as past ones..he will still destroy anything in his path...he also has a great rage factor and can take a good amount of damage...