These Godzillas are the most well known...but you can't count the millennium reboot series...the two Godzillas are the 1954 and 1955(1954 becoming the heisei and the 1955 becoming the hero throughout the 60s and 70s) when the 1975 Godzilla swam out to sea he was never seen again...but the original Godzilla was "removed from time and reborn" but that wouldn't have changed the course of history because in godzilla vs king ghidorah everybody remembers Godzilla and the dinosaur was revived. But the 1955 godzilla wouldn't have been effected knowing it wasn't moved so were is he, the hero Godzilla? If he was asleep while heisei gojira was stomping around what resulted of him in the future (this is my opinion and I want to hear other people's)

You read the description right...and that in 1955 that gojira was mentioned and heisei is gojira while the hero one is 1955 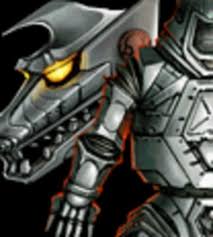 You are right with the 1954 being the heisi and 1955 being the hero. while it's possible that the Showa and Heisi timelines are connected, they might also both be separate. I know it's not true but I like to sometimes try and see if all the movies would fit into one timeline. One thing is for sure though. G1954 and G1955 are both different Godzillas.

Thank you for giving my theory a try...But the millennium series try to reboot to the original...but still leaving the hero Godzilla in the dark

i think the 1955 one is the heisei godzilla while the 1954 godzilla died from the oxygen destroyer. i dont think the hero godzilla apart of the same timeline. the 1955 godzilla who fought the anguiris of his timeline was changed because of the people from the future moving him from his place origin therefore anguiris and godzilla had never met and caused godzilla to become twice as big as he was before

Again...he wasn't effected at all...the original has always been called the heisei...I respect your theory but I can't understand how it works and I think it's just me trying to figure it out

1944 - The Futurians travel back in time to transport the Godzillasaurus they think becomes the Heisei Godzilla to an ocean trench. The mission is successful.

mid-1970s - A Russian Nuclear Submarine sinks in the ocean trench the Godzillasaurus lies and mutates it into the Heisei Godzilla. (The writer, Terasawa, finds this information in Godzilla vs. King Ghidorah.)

1984 - The Heisei Godzilla awakens and rampages Tokyo before being locked in a volcano.

1989 - The Heisei Godzilla returns and goes on a destruction campaign in Japan. He fights Biollante and is forced into hibernation by Anti-Nuclear Energy Bacteria. Godzilla cells make its way to outer space.

1992 - The Futurians trick Japan to go back to 1944 and moving the Godzillasaurus. When they return, the Heisei Godzilla awakes from hibernation and swims back to the area he was created. He absorbs the nuclear energy from a Japanese submarine and grows 20 more meters from it. He fights King Ghidorah and is later defeated in a rematch.

1993 - The Heisei Godzilla is awoken by an astroid and seeks Mothra and Battra whom eventually defeat him.

1995 - The Godzilla cells in outerspace mutate into SpaceGodzilla. He comes to earth to fight the Heisei Godzilla and is defeated.

The Showa Godzilla from 1955 has nothing to do with it. And the original 1954 Godzilla is not the Heisei Godzilla.

Admittedly, a lot of this stuff is hard to catch because much of the Heisei series is so poorly written, but it was the intention of writer Kazuki Omori who directed and wrote Godzilla vs. Biollante and Godzilla vs. King Ghidorah and wrote the screenplays for Godzilla and Mothra: Battle for Earth and Godzilla vs. Destroyah.

I was just wondering where he was all this time

He doesn't exist in the Heisei series. So he wasn't anywhere the whole time.

Look I know he wasn't supposed to be in there but I'm just thinking bout the whole time travel thing....funny how people remembered Godzilla when he was "erased" from history

I explained above he wasn't erased from history. The Futurians are the ones who accidentally created the Heisei Godzilla. Did you even bother reading?

Ya but it's late and I'm a bit off...oh ok I see but I've always wondered bout the hero Godzilla...what happened after he fought mechagodzilla

The Showa Series Godzilla fought alongside Zone Fighter and later helped him destroy Gigan after MechaGodzilla. The Showa timeline ends after that:

Godzilla and Zone Fighter vs. Gigan

After that he probably lived the rest of his life in peace.

On a related note, Zone Fighter also fought King Ghidorah, but Godzilla did not help with that battle:

Trending Articles
Forums & Community
Godzilla Series Tier List 978
Will the new sequel Godzilla and Kong most likely involve romance or not? 5,041
Is this real? 788
Predictions for Godzilla 3? 1,321
LEGO Kiryu is running out of time! Please support now! 1,293