Anybody else notice that just a few minutes back the Godzilla Movies twitter posted a teaser pick of something that will be news on the site tommorow.

Heres the is the link to it. Sorry i couldn't embed the tweet or put a picture up but I'm at work and the crappy firewall is blocking it.  https://twitter.com/GodzillaMovies

Wonder what it could be!?!

I think the embargo on the toy line has lifted and were gonna get a full shot of Big G in all of his gigantic spikey glory.

I know they say no other Toho monsters, but... That looks an aweful lot like a certain plant monster that everyone knows and loves.

Ya thats exactly what i was thinking but i still doubt TOHO monsters will be involved.  Too me though it looks like the toy that was described as "Damaged Godzilla" from Godzilla Chibi Two Pack - Damaged Godzilla + MUTO (8 Legged)

i think it might be some sort of octopus or squid muto. makes sence considering the 8 legs thing.

I really hope this real. I will finally see the Mutos.

That REALLY looks like Biollante.  Considering quite a few of the articles I've read seem to indicate an eco message is strong in this film maybe Biollante is present.  It would make sense and be quite epic (not saying she would be the only monster aside from Godzilla either just the biggest) Yah it looked something like Biollante, in the movie Biollante actually used its plant tentacles to strangle Godzilla. I actually haven't seen the movie, but I saw the scene and it was awesome, I raelly want to see it, thats like the only monster that matches the picture. Like what other monster has green, plant-like tentacles. I truly don't know, maybe it is the new monster, probably not.

But also adding Godzilla will be the only Toho monster in this film, so that sucks, but I'm ok with DAT, GODZILLA IS IN THE MOVIE!!!!!!!!!! You can watch godzilla vs. boillante on daily motion. it's in two parts but that's not bad. You can go see it now if you would like to.

You need to drop what you're doing, and find a way to watch that movie. Its grrrrrrrrrrreat!

Hey, I saw that here http://tallfastskater.deviantart.com/art/GODZILLA-428655830 but I thought it was another fan model or something.

Here's the pic from the link above (which I must saw, is very well done regardless if it's fan made or the real deal)

UPDATE: I just found another pose from the same sculpter, the feet are visible in the left side, and it DOESN'T match the leaked 10" figure 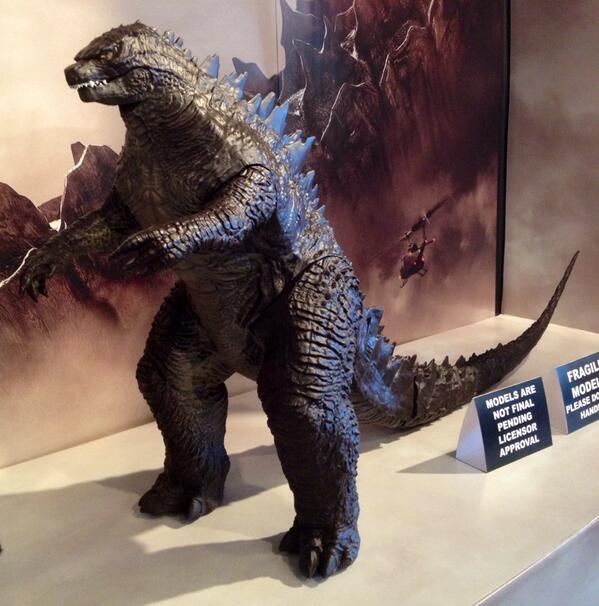 Its probably just a well crafted fan sculpture made by a fan. It looks amazing or its a low chance but maybe Godzillas feet will look somewhat different from what we've been shown. THe model above that is the 10 inch one was subject to change and isnt final but then again theres the model with Biollante. If Legendary decided to reimagine Biollante for a sequel to Godzilla then id imagine it would look like that.

I was contacted by a very talented artist... doing a special feature for his latest project this afternoon on the site to help get his name out there and to show off his truly awesome creation. You'll see 15+ pics of this in the article, but it's just too much fun to tease it. hahaha Although I will say it's NOT Muto... as some people on our FB page have suggested. Many of you have already guessed it. I didn't think it would be very difficult to figure out. ;)