Little breakdown for y'all: I'm in the process right now of planning (read: perfecting) a take on the 3rd Godzilla movie, entitled Godzilla: Monster Island, a direct sequel to my fan-made story treatment for the second movie, Godzilla 2: Rise of Ghidorah (which is pretty much my own personal stab at a remake of GTTHD with all 3 CC-confirmed kaiju in it), basically a remake of Destroy All Monsters featuring new and classic Kaiju, The Avengers: Godzilla Version pretty much.

One of the new kaiju I'm planning is as follows, I'm trying to be as creative (but still fairly grounded for the sake of this reboot) as possible in terms of abilities and design aspects for him. It's still a WIP, so I'd love to hear your input as far as ideas for him (abilities, origin details, whatever), because I'm interested to know how it stacks up compared to mine.

Name: M.I.C.K.A. (pronounced "Mee-Kuh"): Massive Irradiated Cybornetic Kaiju Assassin.
Species: Cybornetic MUTO clone.
Origin: A "top secret project" of the EDF (Earth Defense Force) as foreshadowed in an easter egg in the second film via large capsule, as part of their elaborate "Plan B" once Ghidorah was defeated by Godzilla in San Francisco. It was revealed in the second film that the EDF had begun excessive experimentation with monster cells, even so far as creating new weapons from dead MUTO cells which managed to weaken (though not kill) Godzilla. That was only the tip of the iceberg, though: they had actually managed to scrape up the severed remains of the two MUTO bodies, including remnants from "the original MUTO", and, after extensive crafting using genetics and cloning technology, successfully built a cybornetic MUTO from a special alloy containing the brain of both the male and female MUTO.

The experimentation didn't end there. They then managed to transfer the DNA of the two MUTOs into two separate micro-chips and implanted them into their respective brains located inside MICKA's head, and connected them through the nervous system-composed of thermonuclear membranes-into a Fusion-powered reactor core, making it come to life as a irradiated, constantly glowing (mouth, eyes, and parts of its armor are lit up with UV emmitions, basically like Ultron, or the MUTOs' visor), sentient, cybornetic MUTO clone.

Description: It's armor is composed of a special alloy instead of your typical metal (vis a vis MechaGodzilla, Mecha King-Ghidorah), making it a rather "unique" cyborg with the rest of its anatomical makeup composed of artificially-cloned flesh from the two MUTOs. It also has a dome-shaped head, distinct from the MUTO's rectangular heads, buzzsaws located horizontally on both shoulders (I think you all know who this "original MUTO" is they attached body parts onto from now), double-bladed claw arms with taser-mounted-wrists (basically, one claw above and below each wrist, each mounted to a taser weapon), four-chambered generator located in its chest area. Basically, it's design combines elements (was inspired) from Ultron: 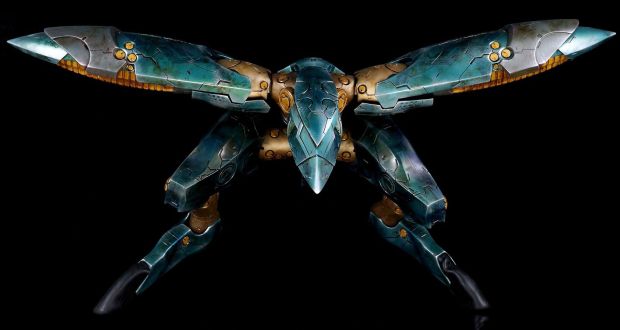 And, of course, Gigan (which the MUTOs were inspired from, so, yeah): 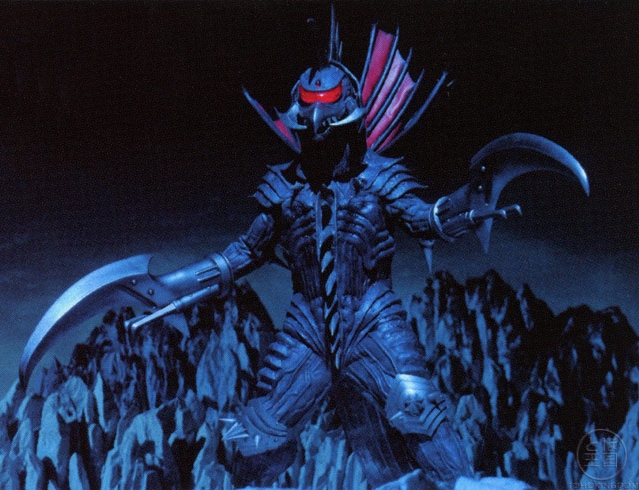 Feel free to give me your ideas, what aspects of his characer you would change (origin, anatomy, abilities, whatever), what have you, in fact, please do, if you have any innovative ideas for him yourself, I would love to hear them since this is still a WIP kaiju.