If I haven't made it clear in the past I'll shoot straight now: I hate-- absolutely loath the Bluray covers for every Godzilla movie released in North America from Godzilla vs. Biollante through Godzilla: Final Wars. (Alright, Godzilla against MechaGodzilla gets a pass.) They are some of the most horrible photoshop disasters and blandest Toho posters produced.

I also like my Godzilla releases having their own individual cases. So as a result I've been working slowly, very slowly, on a project to pay better respect to my Godzilla collection.

I need to note, however, this is a work in progress and will continue to be for the foreseeable future. I'm not a graphic artist. I never have been nor will I be. So the time I spend on these in a single sitting isn't great, but I've come back to it multiple times throughout the year. I've finally landed on a template I like.

I'm attempting to ape the Classic Media and Kraken Releasing format to an extent. And although I hold no love for the fonts that Sony used with their releases, I like my discs and covers to match, thus I'll be using them for the remaining movies.

Criticisms would be helpful as well.

EDIT: I've worked out some kinks. Final designs will be posted here when they're done. Right click the image and select "View Image" to se a bigger version. Message me if you'd like to use any of these: 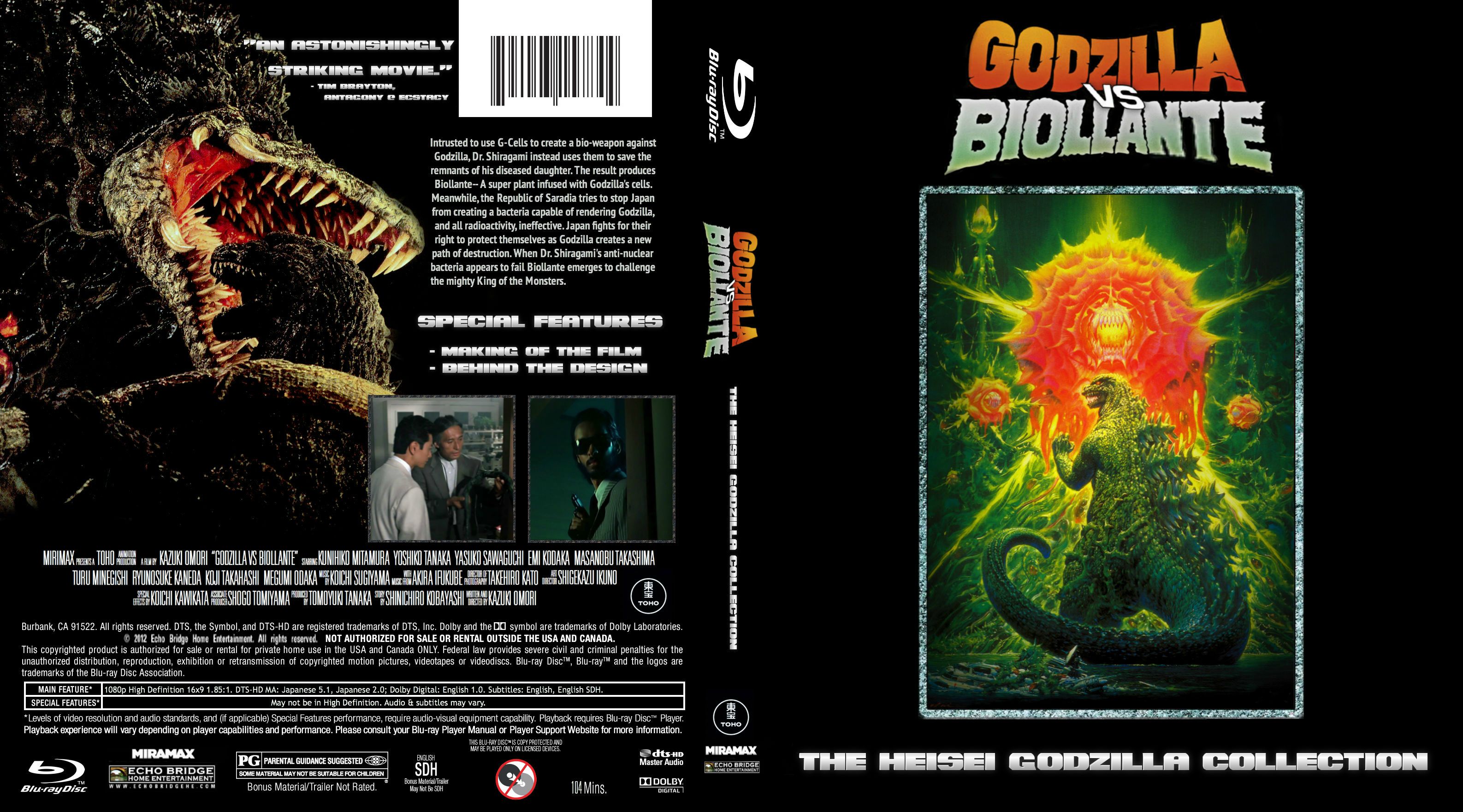 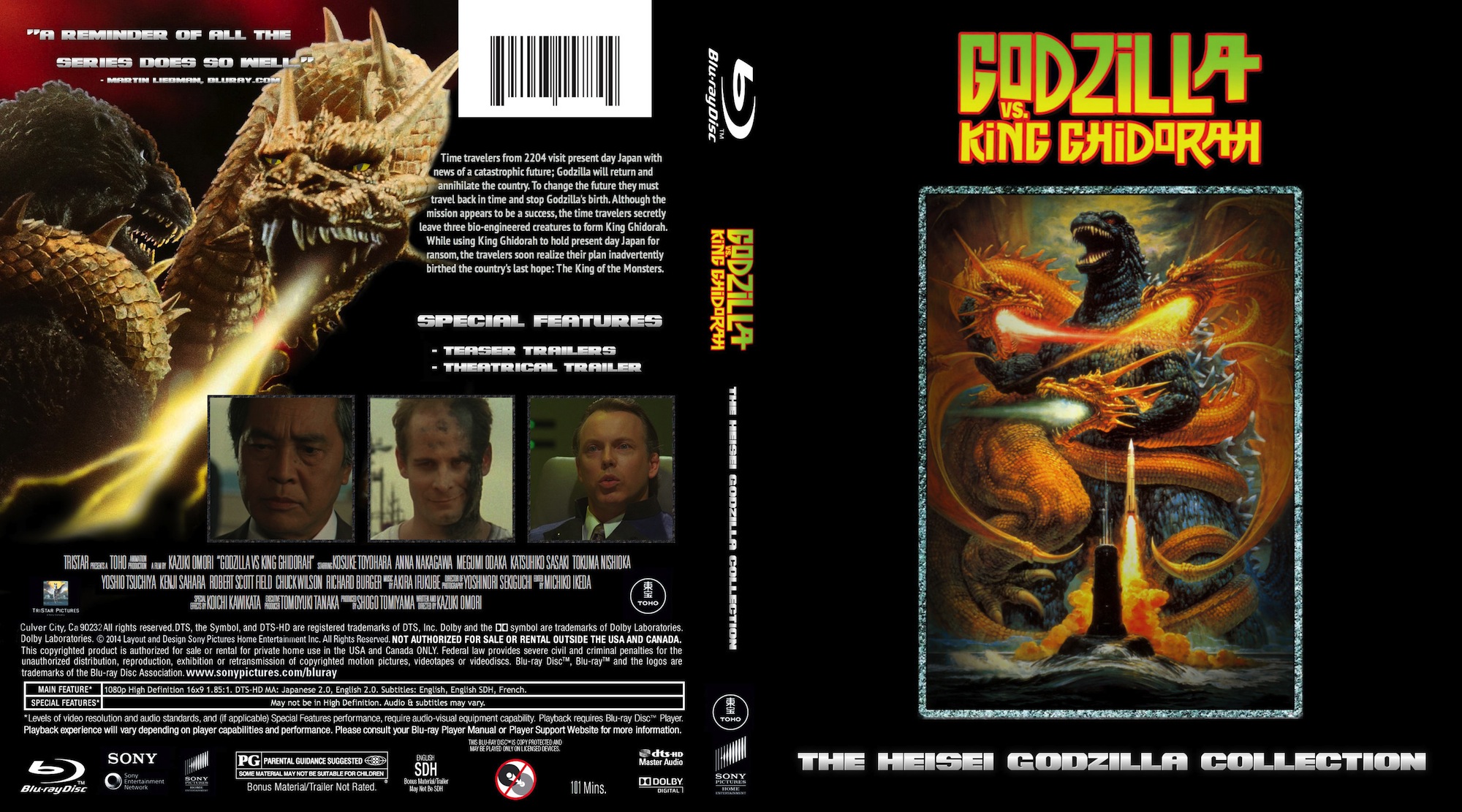 Godzilla and Mothra: The Battle for Earth 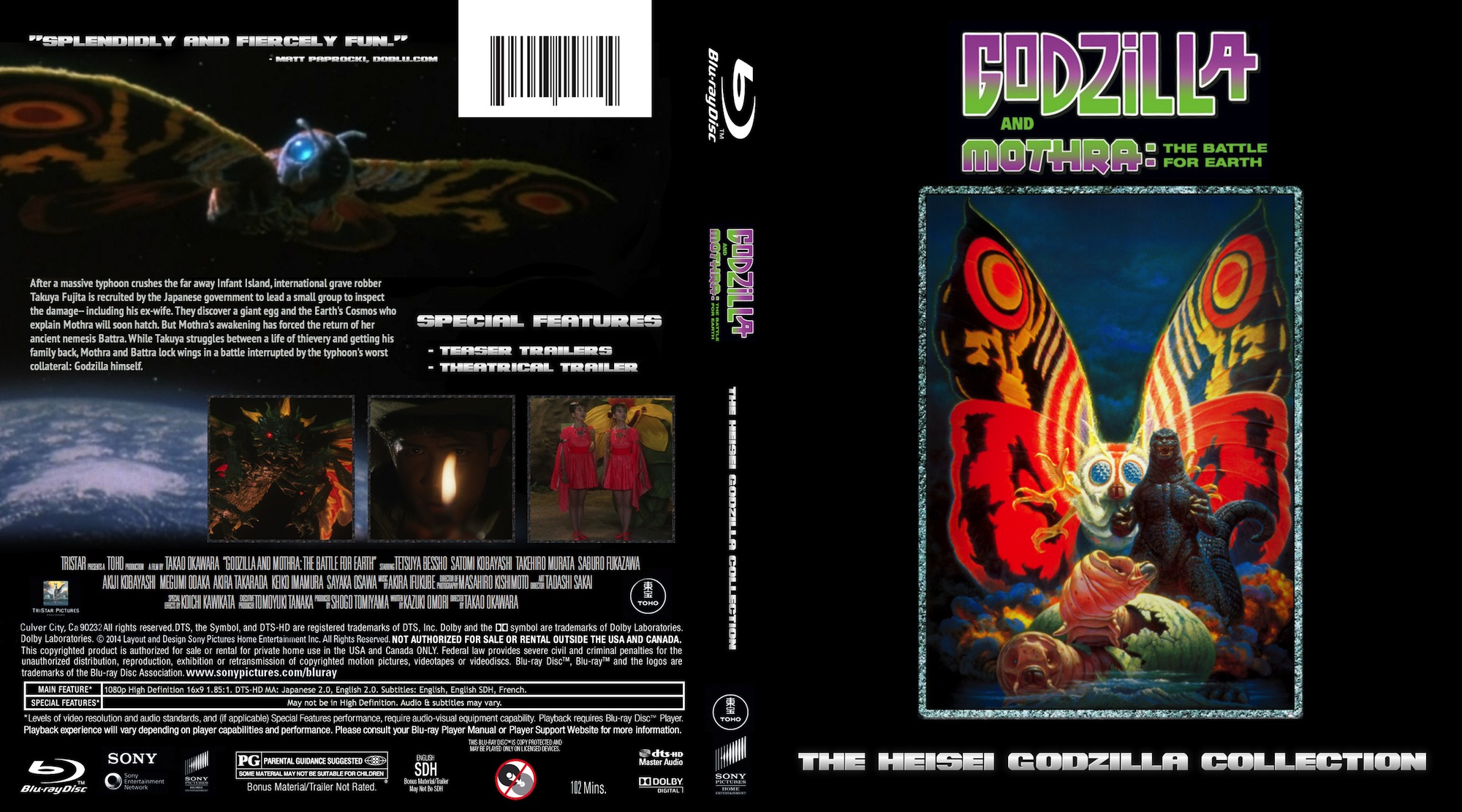 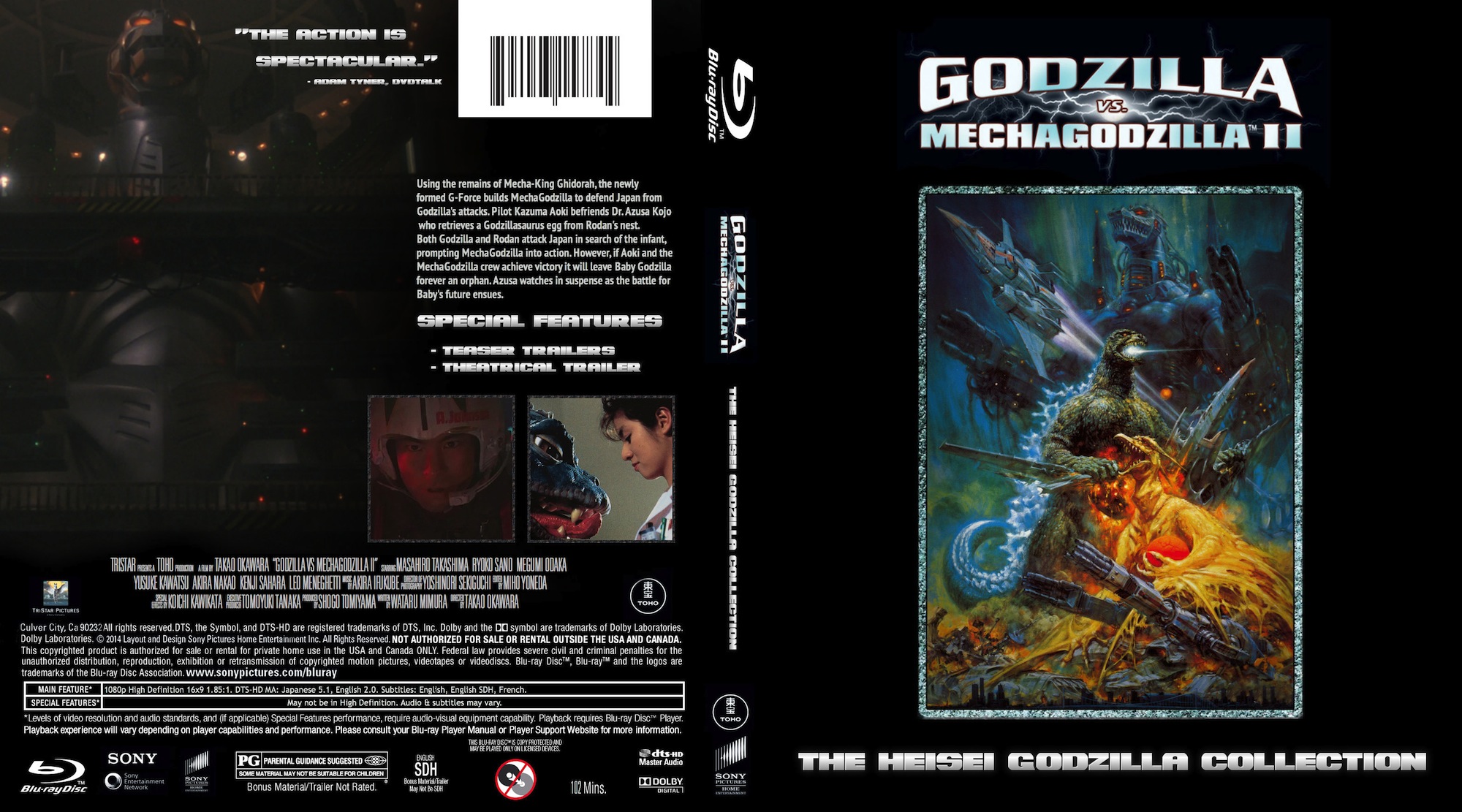 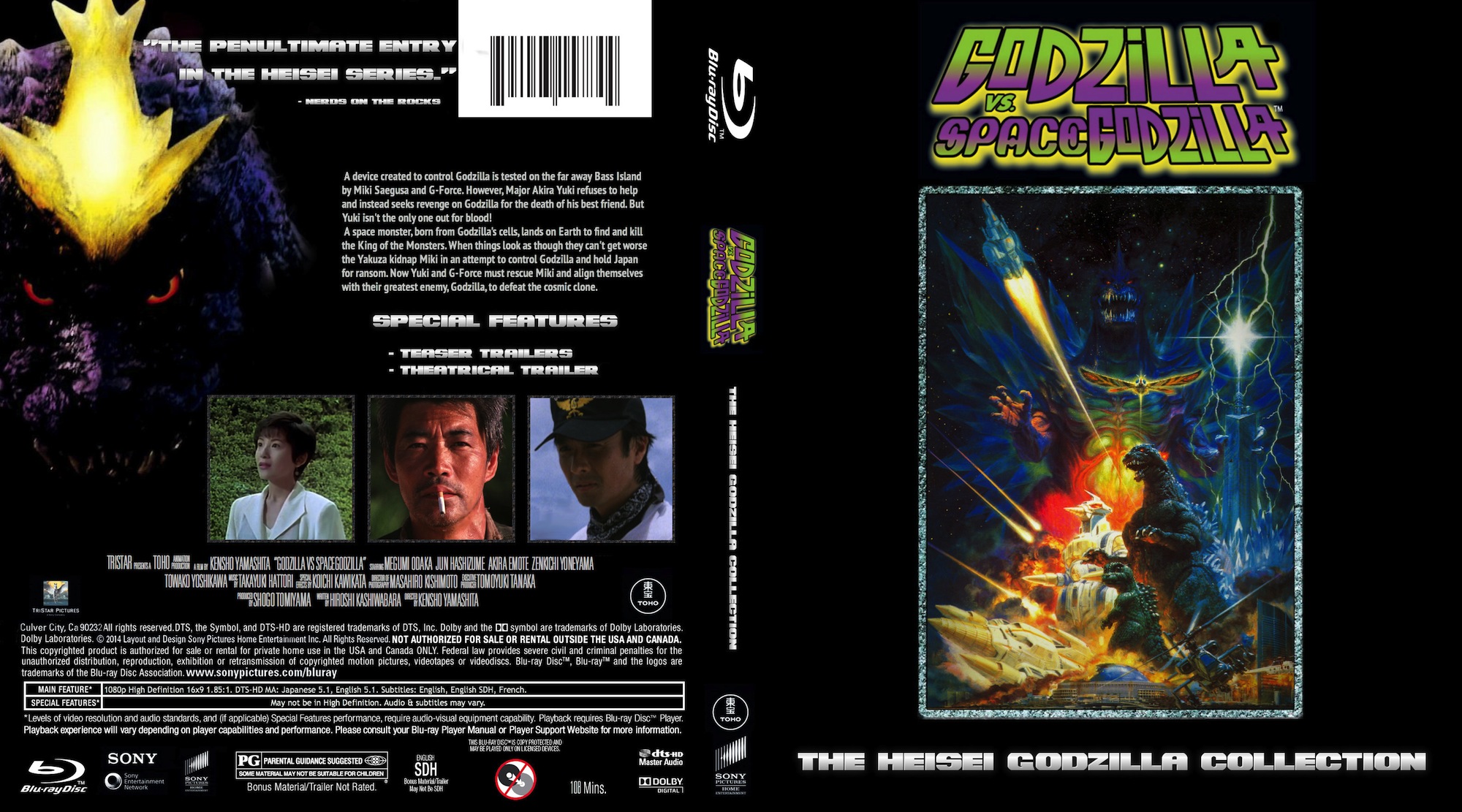 ^Yeah I've tried that, it didn't look all that appealing and really muddied up the blue-ish color scheme the cover has going for it. I may just enlarge SpaceGodzilla's face, omit the tower and call it a day-- But that option does look a little bare...

Is there any way to add a picture of SpaceGodzilla standing in front of a crystal-covered Fukuoka like this one? That one might work a little better, of course the quality and size of the image may be an issue.

^Yeah, I've been trying that and I like that idea a lot, but I want a night shot of him standing in Fukuoka and most of those shots I've found are of either poor quality or...terrible shots honestly.

^The only night shots of decent quality I could think of at all from the movie are of SpaceGodzilla in space (with the uber-fake asteroids in the background) or M.O.G.U.E.R.A. in Fukuoka. All of the shots of SpaceG in Fukuoka are as you said pretty terrible.

I've decided to just go with this for the SpaceGodzilla cover. Anything I added just took away from the menacing face of SpaceGodzilla on the back and I got tired agonizing over the back cover of my least favorite Godzilla movie.

The appropriate specs, run time and credits have been added. I'm off to Destoroyah now. Once I've completed Destoroyah I will go over each one of them and make the full sized covers available for anyone that wishes to use them.

Then I'm off to do the Millennium series.

I'm late to this party, but did you ever finish the Godzilla vs. Destroyah cover? Your covers are amazing BTW!!

Thank you. Although I have not abandoned the project my displeasure with the Destoroyah cover has left it in limbo. However, I recently came upon an option that might change that so, I hope to work on it again soon.

Did you ever finish the Destoroyah cover or the millennium series covers?

Yes, I just never got around to posting it. The Millennium covers are probably half finished. Those have been much tougher to nail over the year.