Do you think Godzilla can with stand the beam of this alien Tripod?

Do you think Godzilla can with stand the beam of this alien tripod from the movie war of the worlds? 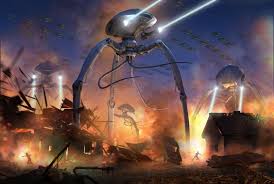 See what the beam does to humans in this video

PICK YOUR TITAN
13 Responses to Do you think Godzilla can with stand the beam of this alien Tripod?

Godzilla survived 2 mini-black hole. He can stand this easily. Besides hard to compare the laser's effect on the fragile human body to Godzilla's thick hide, powerful muscles, durable scales and various other body parts. So yeah, Godzilla would not only survive, destroy those tripods with a taste of their own medicine. Atomic Breath for the win!

^Sorry, I forgot to fix my grammer. I usually speak good.

This is really just pure speculation. Neither have really gone up against something similar to the other.

To the Martian deathrays credit if you're going off the 1953 movie there were times when tanks, and other machinery was it and completely obliterated, leaving nothing left, not even pieces on the ground. The only question is how much more dangerous are their deathrays than the masers which are probably the closest thing Godzilla has ever come to them(and seemingly the weapon the has the greatest effect even if that's not saying much). I don't doubt Godzilla could take a shot or two but if the whole squadron of the tripods all shot at him together he may not be able to handle that.

Of course you also have to look at different incarnations of Godzilla, some didn't like electricity(for it's extreme heat I'm assuming) some could get pierced by missiles, really so many factors into this and we'll never really know but I guess it's fun speculating.

Durpoo gave the best explanation except were all forgetting about G-cells. The beam may be enough to nearly kill Godzilla, but his G-Cells will bring him back no problem. So he is virtually invincible to this attack, it really depend's on the incarnation Showa may die, but Heisei and Millenium will surely survive.

True in the novel they have poisonous gas but this is a monster that feeds offf radiation, so you have to wonder how toxic that gas would be to him, they don't really go into spefics of what the gas is made of. Godzilla's also very tall meaning he probably would be able to stay above a level needed for the smoke to dissipate and not be as effective. In the movies they give them shield of varying power and in the novel they just kind of tank shots. Granted the weapons used on them in the novel are pretty weak by todays standards.  The shields are also weird. It seems they take shots, but the ships often run into things without them being shown so that makes me wonder if they simply activate to heat and sheild that, either way like Godzilla's own defenses the shields seem to take whatever is convenient at the time.

The question is really if the rays could do more damage than Godzilla's healing. Godzilla vs Mechagodzilla 2 showed us that if you keep applying continued damage to an area as the g crusher did with his second brain he can't heal through it, so if the Martians can keep the attacks going and don't let up chances are they would bring him down.

I'd say that the Tripods could seriously damage Godzilla to the brink of obliteration, but his G Cells would bring him back in a couple of days.

KAIJUJIRA - Oh, now this is a very compelling question! Hmm...I would have to say that the Tripod machines from the War of the Worlds would be a serious threat to Godzilla if present in force. Three or Four of them would likely overpower and kill him due to the non-stop barrage of heat beams they are capable of producing. I would think the result would be something like the instance of Burning Godzilla; the amount of damage and incredible elevation in heat would likely put Godzilla into critical meltdown! However, were Godzilla to squar-off against one or two Tripods, I am fairly certain that he would be the victor. He might sustain severe injury, but he would most likely crush the alien invaders! Of course, this is simply my perspective on the issue! Thank you ever so much for this very interesting topic! :)

Meh, the best the Martian heat rays have done, even going off the 1953 movie, is vaporize tanks, which is extremely powerful, but there's nothing indicating they're anywhere near powerful enough to hurt a nuke-tanking monster like Godzilla. Their force fields are more troublesome, since we don't know if they even have any limits at all, but since Godzilla is capable of hurting monsters just as or more durable as he is, it's possible he could penetrate them. If he can't get through their force fields, he might still destroy them through more indirect methods, such as pushing them over so that they're destroyed by the impact with the ground, which I doubt the force fields could protect them from.

All opinions are definitely valid. But we must consider also the locaation in which the battle takes place. Like for example if they fought in a Nuclear Reactor facility the continuous emission of radiation would give a much better chance against the Tripods. If they were fighting in say a forest, no where near a Nuclear Reactors, it would definitely be harder, but he still has a good chance, depending on how many Tripods there are or which incarnation of Godzilla would be fighting.

Now for the Showa version, he probably die in whatever situation you put him in, because he could get hurt pretty easy, and he needed usually needed a partner to help him fight various monsters. But he still has a chance against them. He was usually pretty quick, not the fastest, but pretty fast. It definitely give an edge.

Heisei Godzilla would have a much better chance because he fights very well, he is very durable, and if something does pierce him he can take can heal extremely fast. He also has Nuclear pulse which none of the other incarnations did. Besides the Nuclear Pulse, the Millenium version is pretty much the same. In the forest for them they have less of a chance of winning. At a Nuclear Reactor facility they have a high chance of winning no matter how many Tripods they face.

Legendary Godzilla is a whole different story. He is different than the rest of the Godzilla's. It seems that he has a less durable skin, yet is more agile making him pretty quick against the Tripods who are much slower than him. His faster speed could also be useful in dodging the Heat beam itself. Yet if he did get hit, it could hurt him. His Atomic Breath could do some heavy damage against them. A nice whip with the tail could send them flying, as seen with what he did to the Male Muto. Also his more animalistic fighting style would give him a certain advantage over the other advantage when fighting against the Tripods.

So, in my observations, the Heisei, and the Millenium versions could not only withstand it, but probably win. The Legendary would have a harder time, but still has a very high chance of winning. The Showa version, not so much.

That gif makes me laugh for some unknown reason!

Trending Articles
Forums & Community
Is this real? 499
Predictions for Godzilla 3? 1,020
LEGO Kiryu is running out of time! Please support now! 881
Are godzillas thigh fat 1,614
if you could become one of the ugliest titans who would you be 1,715