Which of his movies was your favorite? Will you be watching his films in celebration of the late director? 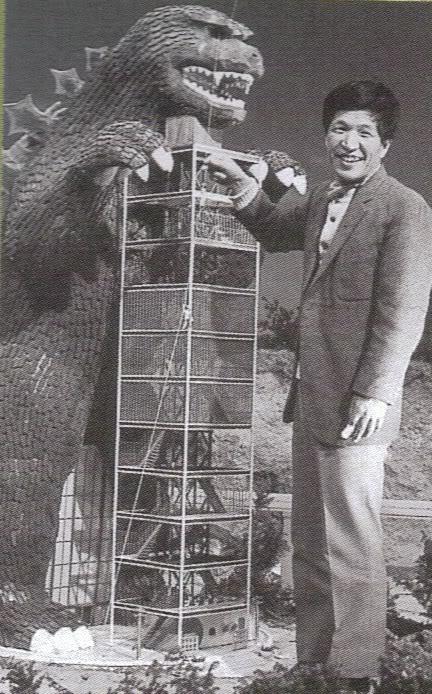 I agree, he is one of the best directors of the Godzilla series. Three of his directed godzilla films are on my Top 10 Favorite Godzilla Movies list. :)

My favorite of his is probably Godzilla vs. Gigan. The last time I watched it was 10 year ago, and I just re-watched it a couple weeks ago! I really love that movie, especially since it was also Haruo Nakajima's last time playing as Godzilla! It was also awesome to see Anguirus fighting alongside Godzilla.

Which Godzilla movie of his is your favorite, Gman? :)

While I have a whole lot of nostalgic love for Godzilla vs. Gigan, it hasn't really held up great on repeated viewings. It was my first Godzilla movie, so I can never say I hate it and I really do think it has some fantastic qualities about it. It's a great example of Fukuda and Nakano being super resourceful despite a painful lack of funds/material.

My favorite these days is probably Godzilla vs. MechaGodzilla. I think Fukuda created something really special with that film and ended his career in the franchise on a high note. MechaGodzilla has become one of Godzilla's most popular foes and the contrasting sci-fi with fantasy is beautifully realized in a colorful, spy-thriller, action flick. It's just a sleek, crazy movie.

Although, like Honda's films, my favorites don't always line up with his best. I think Fukuda's best was Godzilla vs. The Sea Monster. Even without Godzilla the movie is already interesting: A criminal hiding out on a boat gets lost at sea with a boy searching for his long lost brother. The small crew is marooned on an island occupied by a terrorist organization illegally producing nuclear weapons. They're also kidnapping men and women from another island for hard labor. The crimanal and his crew befriend one of the laborers to plan their escape.

That's already an exciting storyline, but throw Godzilla in there and it's just that much more fun! It was a different direction after Honda's epic, fight-against-armageddon stories and full of some great acting. It's the quintessential Fukuda movie.

Nice! And let's not forget about Son of Godzilla! I really like that one too. The effects, puppetry/suit-acting, and the actors were all incredible in that film. The story is pretty neat too, and I just have to give it points for that fun soundtrack by Masaru Sato! :)

I should watch Godzilla vs. The Sea Monster sometime soon, too. I haven't watched that in a couple years. :O

Godzilla vss Gigan used to be my all time favorite Godzilla movie. Right now I think it's more middle of the pack, but Godzilla vs Mechagodzilla is easily in my top 10 G movies.

I was wondering what G movie I should review next I think this is a sign to go watch my old favorite and save SpaceGodzilla for another day.

I really enjoy all of Fukuda-San's films.  He gets a bad wrap for the budget restrictions of his films, and for other factors that were beyond his control.  As primarily a suspense/crime film director, he definitely brought a new flavor to his sci-fi films that Honda did not.  I love all of his films, but Son of Godzilla and Godzilla vs Gigan are two that mean a lot to me.  His best may be Godzilla vs Mechagodzilla, in all honesty, but Gigan is terribly nostalgic for me, and Son of Godzilla is SO well directed and edited, and the story is so intense and fun, that it is easily one of my favorites of the entire series.

Outside of his Godzilla films, I'd highly recomend seeking out his "Mutant" film Secret of the Telegian, a great crime drama with a healthy dose of sci-fi and even horror.  It was followed by Honda's incredible The Human Vapor.  Another Fukuda film that gets the bum rush is The War in Space, his final film.  While it cannot escape its origins as a Star Wars cash-in, it is a fun film on its own, and benifits from Fukuda's tight direction and its quick pase.  Although the latter part of his career was highlighted by science fiction films, his love was for crime dramas and young people adventure films.  I hope the Criterian Collection does a boxset of his more serious films (perhaps as part of their Eclipse series) one day.

And one more thing... Fukuda was incredibly hard on himslef, and never really accepted the fact that his films werent just good, but exceptional.  Up until his death, he insisted that his Godzilla films were the worst ones ever made, and partially blamed himself for the downfall of the character.  Only after repeated exposure to fans insisting that his films were good (and definitely better than he thought tey were) did he finally begin to cave and acknowledge that his films did have merit after all.  Lets pray he passed knowing that he was loved and respected for his work.

Danzilla,
I know Fukuda was always his worst critic, but I've never heard about how fans sort of made him see the light. If he died knowing there was some sort of appreciation for his movies that would have been delightful.

Where have you read that he believed he was responsible for the series' downfall and that fan exposure helped him see the light? I'd love to dig into that a little more.

Trending Articles
Forums & Community
Godzilla Series Tier List 917
Will the new sequel Godzilla and Kong most likely involve romance or not? 4,913
Is this real? 775
Predictions for Godzilla 3? 1,313
LEGO Kiryu is running out of time! Please support now! 1,280