So everytime Chris puts a new Godzilla film of the week up on Facebook, I'm going to create an official talkback section for it. We can all review, debate, dismiss, praise, argue...etc, about the films of the week in each. Up first: 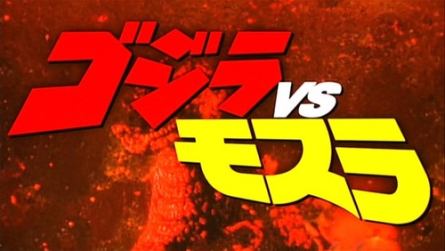 A massive meteor hits the planet creating a typhoon that crushes the far away Infant Island. International thief Takuya Fujita is recruited by the Japanese government to lead a small group, which includes his ex-wife Masako, to inspect the damage. They discover a giant egg and the Earth's Cosmos who explain Mothra will soon hatch. But Mothra's awakening has also brought the return of her ancient nemesis, Battra. While Takuya struggles between selling the Cosmos and getting his family back, Mothra and Battra lock wings in a battle interrupted by the meteor's worst collateral: Godzilla. I swear Chris is looking at my review history... Fourth movie in a row that he's made movie of the week that I've also reviewed.

GMAN2887 - This is extremely fun! I felt that Godzilla vs. Mothra was a fairly good film as Godzilla movies go. I very much enjoyed the fact that Battra chose to aid Mothra in the end by jointly assaulting Godzilla! :)

I always thought this was one of Omori's tighter scripts. He gave a damn about the character arc in this one, albeit, their story finished a little too soon in the film. I always wondered how this one would have turned out had Kaneko directed it.

From what I understand there was some sort of falling out with Omori while gearing up for this film and Okawara was his (directorial?) replacement. I've got nothing but hearsay to base those comments on at the moment though. I'd like to find out more.

As I said in my review I think Takuya chose his family over wealth too early. Mothra hadn't even become a moth yet and his character arc was done. Had he chosen them later on it would have added a lot more than just having them all sit around for 15 minutes.

Agree 100%. It was a solid arc, Omori just wrapped it up before the third act and ended up adding to the Heisei series streak of standing around watching monsters fight-- Which was more of a light show than a battle anyway.

Yes, I often wonder if it was due to this movie's bo office success that things like the beamspamming carried over into other films since while there were a decent amount of rays and beams in the other movies final fights the monsters did a bit of melee too.

Of course with how stiff the Mothra and Battra puppet were there was no hope for this movie to have much physical fighting.

A great part of the preponderant use of energy beams sprung from the belief by Special Effects Director Koichi Kawakita that large monsters, physically grappling, so to speak, was not realistic.

Of course, the financial success of GvM didn't hurt as far as influencing the direction of the Heisei films.

I too have wondered, often, what may have been if Shogo Tomiyama had been receptive to the lobbying of Shusuke Kaneko to direct the 19th Godzilla film. Perhaps we would have seen a fewer number of entries. Especially if Kaneko was given the freedom to reshape Godzilla in a manner he'd been allowed to reimagine Gamera. Maybe not as many movies, but of greater quality.

I would love to have seen Kaneko direct his versions of Godzilla vs. Mechagodzilla and Godzilla vs. Destoroyah. If you add to that, Shinji Higuchi helming the special effects, then you could have had something special. When I think of all of the potential in GvD that was not realized: more character development, perhaps involving the chief scientific symbol, Dr. Dr. Kensaku Ijuin as played by Takuro Tatsumi. If we could have seen him during some private moments, at home, experiencing, perhaps, some doubts and anguish over his newly discovered micro oxygen. We could have experienced those instances of self-doubt and inner fear along with him. Then, these inner phantoms could have made a symbolic, spiritual juxtaposition against the giant monsters menacing Tokyo from all sides. And this is just one example. The women in Kaneko's kaiju films are strong and purposeful. Yoko Ishino's Yukari Yamane could have benefitted from a greater, deeper exploration and exposition of her journalistic determination to get at the heart of the reason for the appearance of these strange, heretofore, unknown creatures, beings that morph obviously in a way that was unprecedented.

Then, if you add to this a complete rethinking and redirecting of the SPFX, with special attention to detail, especially in the area of the use of models, and the realization of scale, then GvD could have been that great finale to the Series that it was meant to be.

The thing is, had Kaneko been selected as the director at the time, I don't know how much control he would have had. He would likely still be working off of Omori's script and with Kawakita's effects simply trying to make the best out of the situation.

Maybe it's just as well he didn't get to direct Godzilla vs. Mothra, but on the other hand a Kaneko/Omori/Kawakita partnership doesn't necessarily sound awful. As long as Kaneko could sort of correct-course it might have been a really outstanding movie.

As it stands I think it gets more flack than it deserves, but that's almost entirely because I really like the characters.

There's a lot to like about Godzilla vs. Mothra, but it's sometimes hard to express, a least in some circles, because it's become fashionable to bash it. It seems, to some, that this is some kind of proof that your fandom or love of the Series, is real. Which is, of course, ridiculous.

I love the visuals of this film, Some of them are actually stunning: Godzilla emerging from Mt. Fuji (with the thermograph registering his dimensions); Mothra swimming with the sun setting in the background; Godzilla marching toward the final battle in Yokohama; the underwater battle between Godzilla and Battra (in this scene, the rays were a good idea); Mothra and Battra carrying Godzlla out to sea.

The bantor between Takuya Fujita (Tetsuya Bessho) and Masako Tezuka (Satomi Kobayashi) was well done. They come off like a (former) married couple. There's a scene at the encampment on Infant Island where Masako is looking at Takuya while he's looking a picture of their daughter. That one shot captured the hope that they could, one day, be a family again.

GvM also features a favorite Godzilla suit of mine: 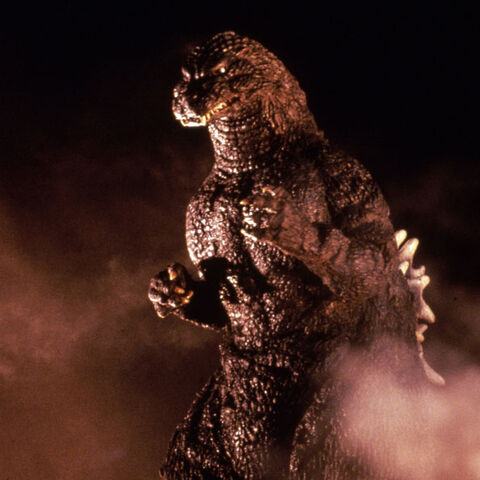 Again, his emergence for Mt. Fuji, with the red backlighting, and Ifukubi's theme in the background, was the visual highlight of the film. After Godzila appears, he sways and then extends his claws.

I believe Godzilla's march from Mt. Fuji and his underwater battle with Battra were both the '91 suit. A water suit was used for the scenes of him appearing against Mothra. So the first time we actually see the '92 suit (BatoGoji) isn't until his fight with the MB93 aerial fighters.

I wonder why they held out on using the new suit for so long.

As much as I enjoy Godzilla vs. Mothra, I wonder how much better it could have been if the story was more reflective of this poster: I know that the monsters are often not to scale in these posters. But, what if Mothra looked more like this, with overwhelming size. And instead of being benevolent, she's a violent avenger, generating hurricane-force winds. I would love to see that one day with these kaiju, but with roles reversed, and Godzilla winding up the de facto hero-of-last-resort. If you throw Battra into the mix, you have something that's colorful and scary at the same time. In this redux, I would limit the use of energy beams and go with more physical fighting that stretches across miles of real estate.

I don't see much bashing of the movie, in fact it seems to be one of the more less talked about Godzilla movies. I don't even see it being brought up when least favorites or worsts are brought up for discussion.

As for the poster, I really can't stand it. While the art looks amazing, as all of the Heisei posters did, it's such a misleading poster. I remember when the Mothra egg hatched and only one larva came out I had to check the box of the tape because I was sure I was given the wrong box. I'm not sure why this one's poster is so off the mark in terms of its relation to the movie. The Godzilla vs MechagodzillaII is somewhat misleading from Mechag's design indicating a look very close to showa, but this one completely misses the plot.

Well, again, there are rumors that there was some falling out with Kazuki Omori and he didn't even finish the script. (Hence the quick wrap-up between Takuya and Masako.) If the movie was having script troubles it's possible they didn't have the full or correct story for artist Noriyoshi Ohrai to go off of. It's hard to say since I don't know when the poster was released in terms of production schedule, but these were generally the equivalent of teaser posters. Best, vague guess is earlier than later.

I mean it's one thing not to have the full story, but either big last minute changes were made, or this poster was made much too early on to the point they just knew the next movie would have Mothra vs Godzilla, as the poster indicates something closer to the 64 with 2 Mothra larvae, with no indication of Battra, who plays a pretty big part in the movie to the point I don't know how they didn't know about that character when constructing this poster. I mean the movie is basically Mothra vs Battra with Godzilla thrown in to top it off.