Now that Comic Con is over and the nerd world will likely face a drought, I'll be returning some focus here. The last round was an obvious win for Terror of MechaGodzilla. I'm glad it came around Comic Con as there were less votes. On to the next games: 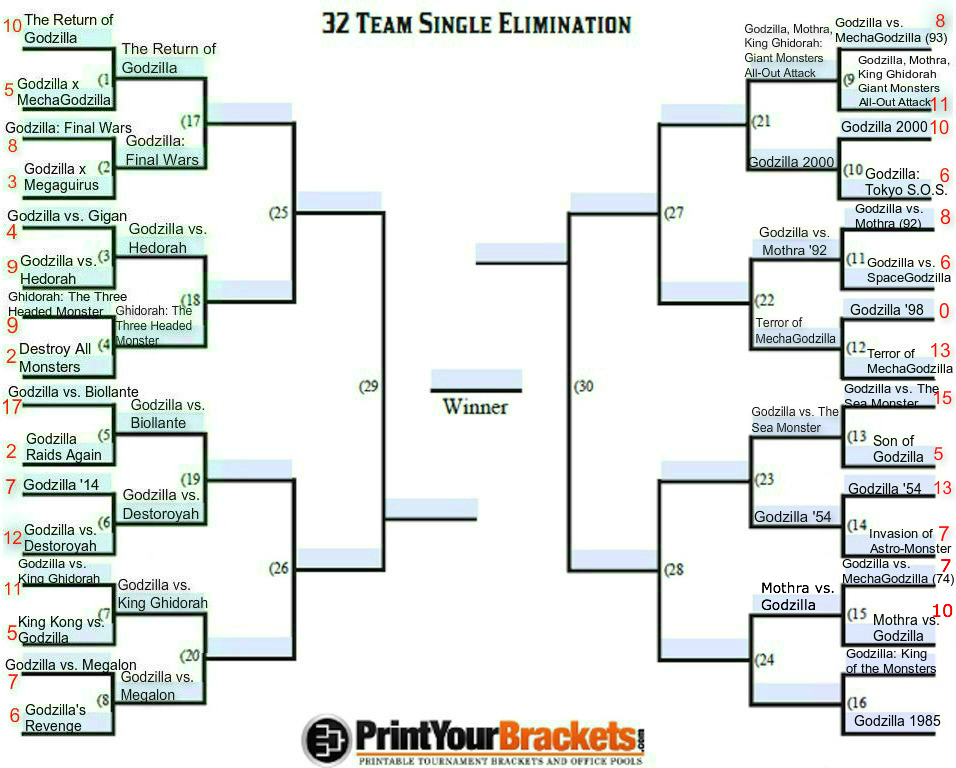 Godzilla: King of the Monsters VS. Godzilla 1985

Having watched both of these films today, I really can't cast a vote. Both films are equalled in my opinion. Godzilla vs. The sea monster is a great film. Mothra and Godzillas battle is brief but touching. Son of Godzilla has some of the most beautiful scenery to date in Godzillas universe. Both are pure fun and are some great entries in the series. I respect both films and know that there was nothing more than pure heart put into these 2 films. My vote is a draw. I find both equal to advance to the next round. However there can only be 1 to move on and therefore, I'll cast a vote for both.

^Unfortunately I won't be able to "cast a vote for both". It makes no more impact than if you didn't vote at all. It's either one or the other to accept a point.

Since you put it that way, I'll cast a vote for the sea monster. Only because Akira Takarada plays a robber.

Godzilla vs Sea monster mainly because I can't stand the look of Minilla(FinalMinilla looks fine tho).

GMAN2887 - I will cast my vote for Son of Godzilla! While I absolutely love Godzilla vs. The Sea Monster, I very much adore the interactions between Godzilla and his child! :)

These are two films that I always feel get an unfairly bad rap or are overlooked entirely. I've always maintained that they are two of the best entries in the Showa series. Of the two, I'll vote for Godzilla vs. the Sea Monster. The human cast in that film is excellent, and really makes the film worth watching even when the monsters aren't pn screen. Akira Takarada especially turns in a memorable performance. The monster scenes are great too, and although the Godzilla suit is really baggy-looking, the fight scenes between him and Ebirah are very well-done and fun.

Son of Godzilla is a great light-hearted fun film, which features some very impressive puppet-work for Kamacuras and Kumonga. However, I don't think the human element in that film is quite as strong as Godzilla vs. the Sea Monster, while the monster action is pretty much on par. Masaru Sato turns in some very pleasant scores for both films, of which I prefer the score to Son of Godzilla by a bit.

So, of two films that I very much enjoy and find criminally underrated, I'll cast my vote for Godzilla vs. the Sea Monster.

For a long time I found Son of Godzilla to be one of the worst Godzilla movies. I would have ranked it bottom 5 basically at all times. I hated the Godzilla suit(still think it's the worst one) hated Minilla, and found Kumonga and Kamacuras to be boring monsters, simply being giant bugs with no abilities or schtick. I still thing a lot of these things, and while I do appreciate the amazing puppeteering that made Kamacuras look so good I don't find them or Kumonga great villains. I did however realize this movie wasn't about the monsters. They could stick the most low quality monsters possible and the overall story and characters would make the film enjoyable. This is one of the only Godzilla movies that I could care less if the monsters show up because the cast and the things they're doing are so interesting. The monsters don't really bring the film down or anything, but I would have been fine just watching those characters interact with anything while living on that island. Son of Godzilla is a great movie and brought in the genius idea to give Godzilla a child. While nothing is really done with the monster itself, after this movie basically becoming a beacon for a child then never showing up again the idea is golden, and allowed the heisei to pull the monster off in a more complete, better way.

Saying that Son of Godzilla is one of the only movies that I could care less about the monsters and watch it for the characters and their story also applies to Godzilla vs the Sea Monster. I never had the hatred for this movie that I did Son of Godzilla. Maybe because I saw it earlier as a child with this being one of the first movies I can recall seeing in the series along with Monster Zero, Godzilla king of the Monsters, and Godzilla 85. The Godzilla suit is a little better in this one but still not one of my favorites I like Ebirah more than Kumonga or Kamacuras but think the giant condor is worse than both. So once again it's the human characters that carry this movie for me. Godzilla doesn't show up in the film for a while, but I never missed him. The one thing I'll give Godzilla vs the Sea Monster up on Son of Godzilla is that by adding human antagonists it really added to the film. Son of Godzilla was just them doing experiments and later surviving the island hazards. With humans making nuclear weapons it just made it seem like more was at stake. The characters were also stranded rather than Son where going there was a choice and till later on in the movie there was no dangers to their survival.

Overall I'm going to say Godzilla vs The Sea Monster slightly edges out Son of Godzilla.

Gotta go with Ebirah, Horror of the Deep. I enjoy both stories, and Ebirah and Kumonga are impressive feats as far as suits/puppets go, Kumonga especially. But the human element was simply stronger in Ebirah, as said before it had the Red Bamboo terrorist group, separated brothers, and the redemption of a criminal.

Also, Minilla isn't endearing at all. He's more annoying than anything. If they had made him look a bit more monster-like and toned down his mannerisms, it'd be more tolerable. But that's not really the Japanese theatre way.

It's a shame they didn't change up the film a bit more to suit Godzilla, instead of simply throwing him into the roll of King Kong. It's kind of like fitting a square peg in a round hole. You have Godzilla infatuated with an island girl, raised by lightning, in a traditional rock throwing contest (which is all Kong), not to mention being significantly weaker than Ebirah in the water even though they're both sea creatures. It would've been interesting to see Kong vs. Ebirah, but after what they did with King Kong Escapes, I'm glad they lost their rights to the ape.

WOLFGUY - I could not agree more. King Kong Escapes was, um, difficult to watch. However, seeing Kong sqaure-off against Ebirah would have been a sight! :)

I've always enjoyed both films but I'll go with Godzilla vs. The Sea Monster. The movie has a better plot, the human characters are enjoyable, and I like the tense scenes such as when Ebirah rises out of the water to terrorize and eat the humans that cross his path. Also enjoyed how the human characters rooted for Godzilla to get off the island before it blew up. I also find it fascinating that Godzilla was buried in rock when they first stumbled upon him which adds a bit of mystery as to how that happened.

Wrapping this one up tomorrow for those still interested in chipping in.

Godzilla vs. The Sea Monster took the last game 15 to 5 against Son of Godzilla. Next up.

Invasion of Astro Monster is just a better film.

Godzilla 54'. Win! It started it all. I love monster zero, but, 54' has my heart and will always be considered to me as the greatest.

Gojira is probably the slightly better movie on paper, but I tend to enjoy Monster Zero slightly more.

Going with Gojira. Invasion of Astro Monster is rather on the dull side.

GMAN2887 - Ooh, this is another tough one! Hmm...both films were incredibly engaging and presented iconic monsters. However, I believe I will cast my vote in favor of Godzilla ('54)! I simply can not express the amount of delight I receive from watching that film! :)

While I do like Invasion of the astro monster I'm going to have to go with Gojira mainly because it is the film that started it all.

Wrapping this one up tomorrow.

Godzilla '54 took out Invasion of Astro-Monster 13 to 7. (Although considering it's the original I have to say Invasion put up a great fight.)

Godzilla vs. MechaGodzilla VS. Mothra vs. Godzilla

So yeah  I'm going with Godzilla vs Mechagodzilla.

Mothra vs. Godzilla. The story is one of the best in the series. A goddess vs. A devil. The fight between Godzilla and Mothra can't help but touch the movie goer. It's characters are at the best. Godzilla 64' design is a fan favorite! It takes itself seriously and has a message about how good can triumph over evil. It my 2nd favorite Godzilla film and in my opinion is the 2nd best in the series.

Mechagodzilla is great but, its James bond style kinda upsets me a bit.

So, my vote is for Mothra vs. Godzilla!

Godzilla vs. MechaGodzilla VS. Mothra vs. Godzilla

Between these two I have to go with Godzilla vs. MechaGodzilla.

You'd be wrong Durp. Mothra vs. Godzilla all the way on this one. One of the best films in the entire series.

Trending Articles
Forums & Community
Will the new sequel Godzilla and Kong most likely involve romance or not? 3,666
Is this real? 656
Predictions for Godzilla 3? 1,169
LEGO Kiryu is running out of time! Please support now! 1,055
Are godzillas thigh fat 1,751