It's back. Pick, vote, debate. Have at it.
(I was going to have everyone just hand in this rounds votes, but I think that deprives conversation.) 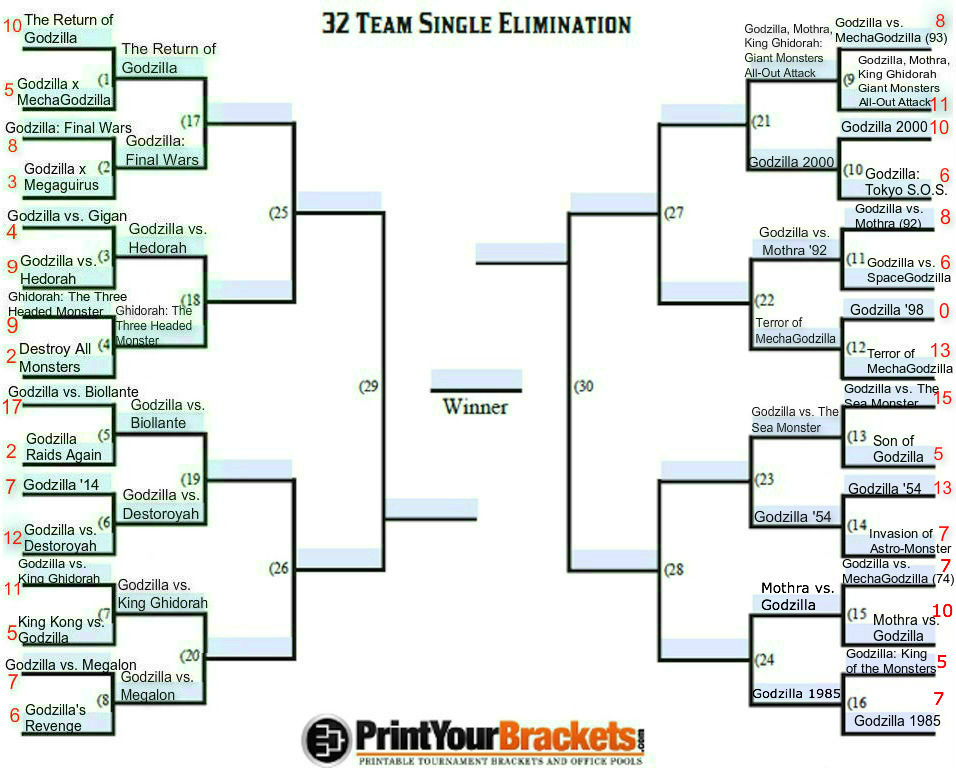 GMAN2887 - Despite its faults, I feel that The Return of Godzilla is the better film amidst the two you have presented. In my opinion, the fact that the film attempted to bring Godzilla back to his more frightening and destructive roots is worthy of praise - especially when it managed to produce truly unsettling moments. Though I believe The Return of Godzilla came up short due to the inclusion of more, hmm, let us say "fantastical" elements like the Super-X and the notion that Godzilla has a migratory mentality similar to that of certain bird species, it still manages to touch on the basic elements that made the original 1954 Gojira so memorable. Plus, the updated special effects made Godzilla much more realistic and, by extension, more frightening at certain instances! :)

The Return of Godzilla gets my vote obviously. It's a solid installment in the Godzilla franchise, and I much prefer Godzilla as the villainous, walking nuclear bomb such as that of the first one. It's cold war tones were also decently engaging. Sure, it has some misteps here and there (one being 'literal' with the inclusion of a truly fake looking giant foot).

Final Wars, on the other hand, is a laughable. For me, at least, it's truly painful to watch. The Special effects and kaiju suits are awful, and the only thing that even stands out to me as I try and think of it is the highway battle between the two X-Men... and that's pretty wrong for a Godzilla movie.

Final Wars of course has lots of daikaiju, but that isn't what makes a good movie. Plus, the music in Final wars just doesn't work.

Return of Godzilla is a solid Godzilla movie.

Final Wars of course has lots of daikaiju, but that isn't what makes a good movie. Plus, the music in Final wars just doesn't work.

Return of Godzilla is a solid Godzilla movie.

Return of Godzilla. All day.

Final Wars is a terrible film

Yeah Return of Godzilla gets my vote. It may not have had the absolute best characters, but its story was really well done. Final Wars has its moments if you want to turn your brain off and enjoy it, but that's the only way to enjoy it. If you ever look at it seriously it's a joke, Return of Godzilla just comes across as a much better movie.

I didn't know people disliked final wars so much.

Lopsquid,
It's generally considered one of the worst of the series. Even the people that do enjoy it (like me) often admit it.

Although there is a vocal group of younger fans that tend to think it's the second coming.

Well it's not my favorite but i personally put it above return of godzilla.

If I have to go for a serious godzilla i'll go for 54. (Also is the ultra in your profile picture nexus?)

I've lurked on this site for a while and missed voting in the opening round.

THis is one of of those "head vs. heart" choices for me.  I think Return is objectively the better film, but like some have said, I LOVE Final Wars while fully recognizing how bad it is.  Final Wars is one of the few films I can just pop in anytime.  It has re-watch value, because it's just that absurd.

Since Final Wars will likely get shellaced in this round, I'll cast my vote in favor of Final Wars.  =)

Lopsquid,
Yes, it is Nexus.

Chief,
Welcome to the boards! Hope you're here to stay.

CHIEF - Weclome to SCIFIED! It is always quite nice to see new faces! I look forward to hearing your opinions in the future! Once again, welcome to SCIFIED! :)

LOPSQUID - I absolutely adore Final Wars! It is an extremely fun movie! However, it is simply too, hmm, silly and (in my opinion) haphazardly thrown together. I will sit down and watch it with glee, but it does not possess the substance that The Return of Godzilla boasts. Regardless, I watch Final Wars at least once a month! :)

As fun as I find Final Wars, justifying its quality is difficult even on a satiracal level. Because even if it's played off as a satire that means it's practically spoofing all the negative aspects of the series. Suddenly it feels less fun and more insulting.

Some casual fans and even non-fans tend to cheer it on just because it possesses all the cliche qualities many tend to think about Godzilla movies, ad nauseam: Over-the-top monster battles with poor effects. Bad acting. Massive plotholes in the movie's own internal logic. Even bad dubbing when we factor the looping during the New York scene.

There are some admirable and enjoyable qualities in Final Wars that keep it from being unwatchable, but there's also underlying philosophies that misrepresent the series as a whole.

Let's be honest for Final Wars the fact it even got to the second round is a miracle it itself based off some of the movies that got knocked out in round 1.

^Yup. It was just paired with a bottom of the barrel movie.

GMAN2887 - Hmm...I never quite looked at Final Wars from the perspective you have presented. I can certainly see and respect what you have stated. I am, however, left with a bit of curiosity. For what reason did Toho choose to include such an over-the-top amount of nonsense in Final Wars when it clearly devalued the film as a whole? It seems almost as if they wanted to mock their product to a degree. I find that to be a very interesting notion. :)

Well, it even said "in what may be the greatest episode in this legendary series " Do I have to say that I rolled in the floor laughing my butt off?

HUGE-BEN - Hahaha! Well, at least you were afforded some entertainment by Final Wars! :)

Something Real,
I don' think Producer Shogo Tomiyama and Toho knew what they were getting into when they hired Ryuhei Kitamura to direct the film. Although I've since lost the direct source, I remember reading Toho wasn't too happy with the final product upon seeing it before the release.

Kitamura is all about style and he's not particularly an advocate for Japanese action pictures. He's too heavily influenced by late 90s/early 00s Hollywood action flicks and it shows in each and every one of his films. Not that this is a terrible thing. He has some very good flicks under his belt. But it seems he didn't fully understand the series and why people enjoy watching it. Final Wars is the result.

I get the impression Toho was so proud of the names they got attached to this movie that they overlooked how well it would all mesh together. Meanwhile, poor Eiichi Asada had the same budget he had for Tokyo S.O.S. to get the special effects done. That's impressive on its own merit, but Toho blowing most of their budget on bigger names, on-location shooting, dramatic sets and motorcycle chases over kaiju visuals is a severe misuse of the budget.

GMAN2887 - Saints alive! I was not aware of a 10th of the information you have presented here! Looking at it through the scope of what you have stated, I can certainly see and understand why Final Wars turned out in the fashion it did. Thank you ever so much for the clarifications you have provided! :)

The Return of Godzilla beats Godzilla: Final Wars 13 to 5.

Off to the next round.