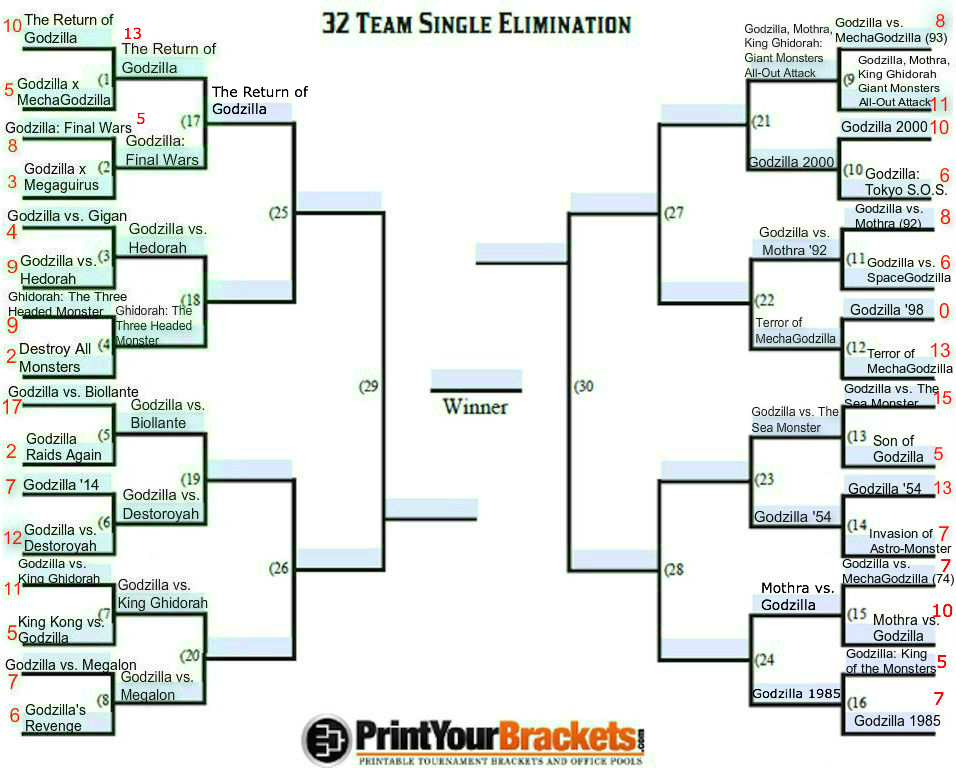 Ghidorah is just too good to lose against the competition. So, my vote is for Ghidorah.

Gotta go with Ghidorah.  I haven't seen Hedorah since I was a kid, and I watched Ghidorah when it was streaming on Netflix recently, but I do think Ghidorah is truly better.

If Godzilla vs Hedorah wins this round I'm quitting this forum

So that's Ghidorah for Durp...

My vote is for Godzilla vs Hedorah

Hear me out first.

King Ghidorah is an amazing daikaiju. He is one of my, and most people's, favorite giant monsters. But he honestly doesn't do a lot in this movie. It is nice to see a lot of monsters on the screen, but they don't work that well together (both in the story and actually on the screen). This is one of the first instances of Godzilla acting more kid friendly (laughing and getting a lightning shot to the butt) and there definitely is a place for some Godzilla camp, as my vote for Hedorah can show, but when you put him up against a serious character like King Ghidorah it just doesn't work. Also, the fighting is not very good and the lack of speed editing did not help things.

As for the human story, I would say the story itself is on the top half of interesting stories: Assasination plot to kill princess, weird Venusion spirit inhabits her body to warn people (but not really do anything else), the Peanut twins making another cool appearance. The problem is not with the human story, but the human characters. Besides the Princess there really isn't anything interesting going on.

In summation, while this is an important movie by being the first to introduce King Ghidorah and also being a big monster brawl, it is not overall a good Godzilla movie. I believe a lot of people get this mixed up with the much better movie Invasion of Astro Monster.

As for Hedorah, that is an interesting thing. It definitely has some campy moments; trippy transition scenes, Godzilla flying. But unlike the other movie it works here. It is a perfect mix of surreal/camp/earnest that makes it good.

Hedorah is closer to the original movie because it has an overall environmental message about pollution. Sure, it beats you over the head sometimes, but unlike a lot of Godzilla movies it still has a message. We get a good origin story for the other creature and we get to see it go through different stages. Also, during this time we follow a related human story that actually ties in with the creature.

As stated before, this movie definitely has some camp, but it still somehow manages to be somewhat serious and disturbing at the same time. There are scenes of people melting, and at one point Godzilla almost drowns in pollution. It definitely feels like a battle that Godzilla could lose, but through working with the humans they defeat Hedorah together.

I can see where you're coming from and I enjoy the contrary opinion, but I can't agree that the element of camp in Ghidorah: The Three Headed Monster doesn't work. Godzilla and Rodan's clowning around is a juxtaposition that elevates King Ghidorah further as a very serious threat. It also succeeds as a seque for anthropomorphizing the monsters during the conversation scene which is right in line with one of Honda's greatest and most favorite themes: Unity. He had made movie after movie about mankind humbly putting aside their differences to overcome a great threat, doing the same with monsters was strangely logical. Not to mention putting Toho's "big three" in the same movie was brilliant screenwriting to introduce the greatest threat yet.

I also don't understand how you can list everything that the characters are and do in Ghidorah and then say "there's not much going on". There clearly is at all times: Shindo's relentless determination to protect Princess Salano escalating with his sister both helping and getting in his way. Shindo's sister is also the bridge between him and Professor Miura (returning from the previous movie), who is studying the meteor and eventually joins with them to convince the Shobijin to call Mothra. And then of course Princess Salano's overall story is probably one of the most interesting in the series. Each character works on their own and their individual stories organically cross by the third act for a strong finish.

Contrast this with Hedorah which has characters with minimal to no development or drive that are rarely center to the action and even dropped by the third act as mere spectators. In fact Ken is visually absent from much of the final battle after being built up as the movie's primary protagonist. Which is odd since the most he's able to do is unexplainably sense when Godzilla has arrived.

In summation, while this is an important movie by being the first to introduce King Ghidorah and also being a big monster brawl, it is not overall a good Godzilla movie.

I could understand if you said you didn't personally like Ghidorah, but to say it isn't a good Godzilla movie?

Also a fair amount of Godzilla movies do have a message they just are more subtle with it just because they don't have the characters to constantly refer to it, an antagonist monster based around it, a song dedicated to it that plays throughout the movie doesn't mean there's no message in them. Godzilla vs Mothra 92 has a message about deforestation and destroying the environment too, but I wouldn't call it "closer to the original" than say Ebirah Horror from the Deep just because of that.

While I do enjoy Godzilla vs. Hedorah more than most, I've gotta go with Ghidorah. While it's silly at times (which Hedorah is as well), it's a blast to watch and set the foundation for all Monster brawls to come. Plus, Godzilla getting his junk blasted is an auto-win right there.

Opinions be opinions. I personally didn't enjoy Ghidorah the Three Headed monster and don't think it is as good a movie as Hedorah. I completely accept that others think differently and I actually appreciate that. I am not going to leave because other people disagree with me.

Durp: You missed the point. Hedorah has a message similar to the original while Ghidorah the Three Headed monster does noth. That does not mean I am saying other movies don't have a message, just the Hedorah has more of a message than Ghidorah.

I don't agree that the actual carry through isn't interesting. If you omit Godzilla, Rodan, Mothra and King Ghidorah you still have an intriguing science fiction/crime story about an important political figure being hunted down by assassins while an alien influence possesses her with the foresight of calamities. The characters have their own battle to fight just as Godzilla, Rodan and Mothra do. I don't think the lack of influence over the monsters affects the story negatively in the least.

But even then the characters DID have certain influence over the monsters' arc. Had Shindo's sister and Prof. Miura not taken the Shobijin to the Japanese government they may not have been pursuaded to call Mothra to speak with Godzilla and Rodan.

Take Godzilla and Hedorah away from the so-called character arc in Godzilla vs. Hedorah and you really don't have anything. Ken's only remote usfulness is unexplainably sensing when Godzilla has arrived. (Which cutting to Godzilla would have communicated to audiences anyway...) And his uncle would continue to drink at clubs while his father fishes for specimens. Not particularly riveting.

EmptyH: I understood what you were saying. You're of the opinion that having a message is closer than not having one. I'm however of the opinion that even if one has a message, when it does it so heavy handedly and in your face it's about equal to the movie that chose not to detract from the story to constantly remind you of said message.

As a side note: you did actually say the words, "but unlike a lot of Godzilla movies it still has a message." in the part of your post talking about why you thought Godzilla vs Hedorah was the better of the two, insinuating that most movies, or at least close to it do not have a message, rather than just Ghidorah the Three-headed monster.

I think Godzilla vs Hedorah is a very visually driven movie. It's visuals send a lot of its message beautifully. Even the song in the opening was fine the first time. The problem was that the movie also send its message every way possible. The visuals sent the message fine, the song didn't ever need to come back after the opening, and the characters never needed to address it directly. The visuals and even those transitions sent everything that needed. Hedorah gets a little too in depth for my taste too. In contrast to Ghidorah who is just a world destroyer we learn everything about Hedorah up to its cell structure. The only character that did anything relevant was Dr. Yano. There were about 5 characters, one was his wife who just took care of him when he got hurt, his child who didn't do anything storywise, and the uncle and girlfriend. I think Hedorah is a good movie, or at least interesting, but overall I'd have to say Ghidorah the Three-Headed Monster is a better movie between the two. The characters and story are much better even if the visuals aren't as message sending.

Next round takes place here.