Godzilla vs. King Ghidorah took the last round 12 to 4. 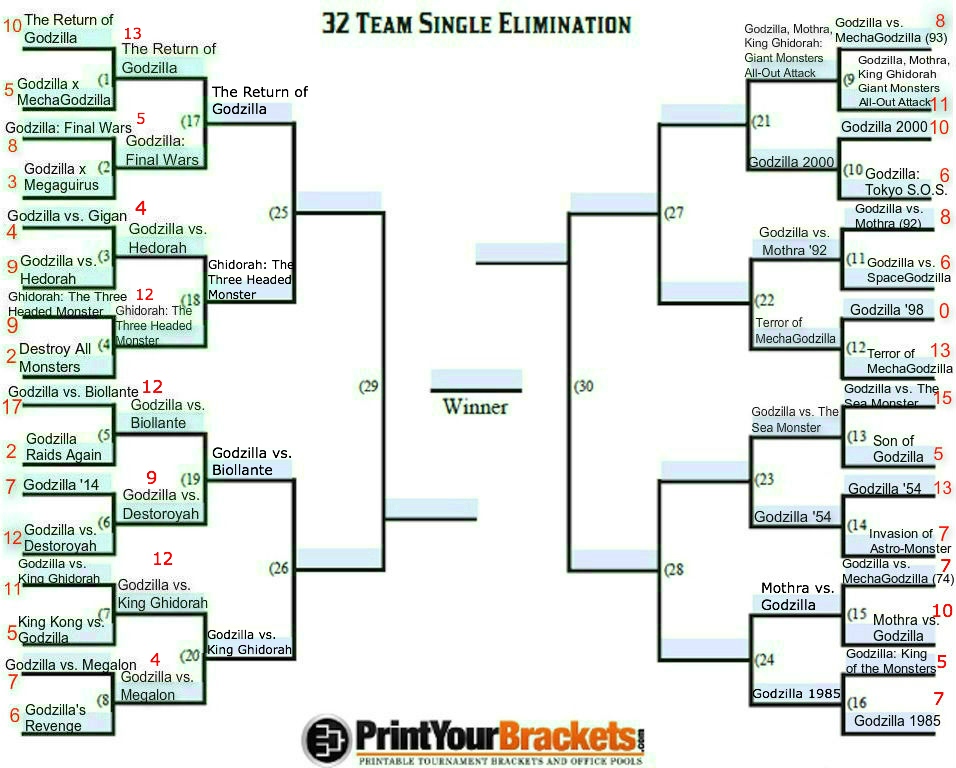 GMAN2887 - Oh, gosh! This is going to be a difficult decision! Hmm...Godzilla, Mothra, King Ghidorah: Giant Monsters All-Out Attack always struck me as being somewhat forced. Godzilla's wickedness seemed, in my opinion, to be imparted simply to provide an antagonist - it felt as if it lacked depth. Additionally, the concept of Godzilla being comprised of angry spirits from the destructions wrought by WWII was definately interesting - and a slight departure from his original background. Of course, maintaining Mothra in her role as a force of good was not surpising; however, changing King Ghidorah into a heroic entity was certainly a vast deviation from the norm!

Looking at Godzilla 2000, I must say that it seemed to capture more of Godzilla's original spirit through its darker tone and the sheer amount of destruction that crops up over its course. Godzilla's new appearance was very impressive and the non-CGI special effects had a visceral and satsifying quality that game the film a sense of legitimacy that others within the Godzilla pantheon have lacked. With that being said, Godzilla 2000, like GMK, seemed to have a forced feeling. Orga, while exceedingly neat in design, was simply another space monster designed to give Godzilla a run for his money and make him a more protagonistic entity.

Hmm...after careful consideration, I shall cast my vote in favor of Godzilla 2000. :)

I vote for GMK

it's an absolutely brilliant movie.

The kids and young adults consider him a myth, the middle aged people don't believe he existed (or a few of them at least).

but the people that lived through his rampage in 1954 will never forget. How could they.

the old man in the car that sees Godzilla walking by is absolutely terrified. He lived through what happened in 1954. He hasn't forgotten.

Ehhhh...this is hard. On one hand, GMK sports a brilliant soundtrack that was just so different from the other Godzilla films. The movie had a great and interesting cast, and Godzilla's design envoked a feeling of evil. The action was excellent to watch, and you really do get invested into the movie. However, there were a few flaws that also came with it.

The choice to put in Mothra and King Ghidorah as ancient guardians to simply attract a bigger audience was not a good move in my book. Other kaiju that fit the roles of the god of the sea and god of the air would have been more suited to monsters such as Manda and Varan, respectively. Baragon should've had more screentime, it seems like he was only there to fill in a small part in the film.

On the other hand, Godzilla 2000 was a return to the original Japanese roots after how Godzilla 1998 screwed us fans over. The atmosphere of the film was not as dark as GMK, but it got the job done. The cast is about on par with it GMK as well. Goji's design is more beastly and animalistic than his previous incarnations, which I love. But the real highlight of the film for me was Orga. Probably one of the more uniquely designed kaiju out there, the spaceship form did leave something to be desired for, but Orga after absorbing Godzilla's DNA was an abolute monster. Had he been able to swallow Godzilla and completely absorb him, there might've been no hope for the humans.

The cons of this film are as follows: some parts were just a bit boring for me. I honestly can't think of anything else, other than how that underwater CG shot could've been improved vastly..*shudders*

I like both these movies, but I have to say I like GMK a little more. Both of these are definetly in my top half though.

I vote for Gmk. It put Godzilla back to his villainous ways. His design is scary even. Godzilla 2000 is fun but, it isn't as good as Gmk. At least not to me.

This one is tough as I really like both films but I'll go with GMK. Despite several flaws including a weak looking King Ghidorah and weak soundtrack, the visuals were impressive and the pacing was better.

I appreciate what the filmmakers tried to do in GMK, but it was a bit convoluted. I did enjoy Godzilla's return to villain (quite possibly the most malicious he's ever been), but I'm going with G2000 here.

Trending Articles
Forums & Community
Will the new sequel Godzilla and Kong most likely involve romance or not? 3,680
Is this real? 657
Predictions for Godzilla 3? 1,172
LEGO Kiryu is running out of time! Please support now! 1,064
Are godzillas thigh fat 1,752