Toho's next instalment in their long line of Godzilla movies will feature the largest Godzilla... ever. Even larger than Legendary's Godzilla. We saw what happened when Japan retaliated to the last American "Godzilla" in Godzilla: Final Wars. Though that fight was short-lived and not really much contest for the true Godzilla, Legendary's Godzilla, I feel, would put up a much better fight. Obviously, we likely won't ever see these two incarnations do battle on-screen, since Legendary and Toho remain on good terms after doing the King of all Monsters justice for once. But the topic is still a fun one to speculate over. What if - Shin-Gojira and LegendaryGoji were to face off? Who would you put your money on?

I realize we know very little about Shin-Gojira in terms of strength and abilities, but from understanding Toho's history, we can safely assume all of his trademark abilities will be present in the new film. 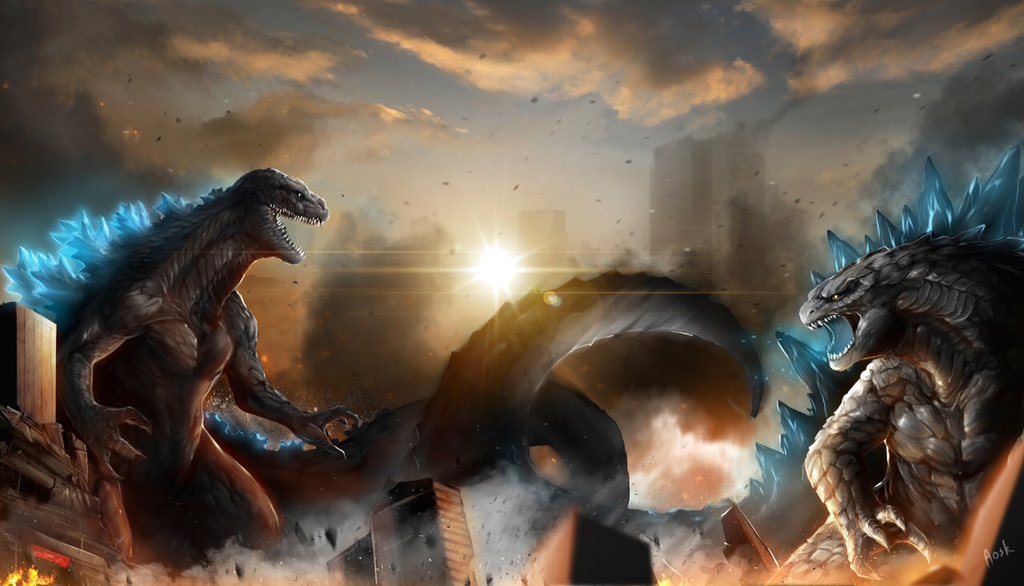 Artwork by Aosk26 on DeviantArt

PICK YOUR TITAN
11 Responses to Shin-Gojira vs. LegendaryGoji, Battle of the Godzillas

shin gojira... hands down would win.. his atomic breath is way hotter and would cook american version.

No way of knowing. Shin-Gojira may be taller, but does that make him heavier? Stronger? We don't know anything else about him. Plus, from what we do know, this will be a solo outing, so we don't have any measure of his abilities against other monsters. It would just be pure fan speculation, and while that's fun, I personally need a bit more substance.

Knowing literally nothing about Shin-Godzilla it's impossible to say. But I doubt the new Godzilla will be much of a combat creature--Assuming it really is a solo movie.

This would most likely never happen, but since you ask, Shin Gojira for the win hands down. But, since it happened with 98 in Japan's series, I think it could happen, probably only when Legendary's series end or fails at some point, whoich is most likely to never happen. But it'll mostly be a fight between 2014 and a future Godzilla we've not seen yet, but it would still be awesome.

I don't quite think Shin-Gojira's beam is enough to cook a 350 foot creature, alive....

We've not even seen his beam.

the 54 godzilla atomic breath was hot enough to melt steel..If toho stays true to the original concept.. then so will shin gojira. and yes... he would cook the american G with breath that hot... edwards G did not demonstrate the heat like 54 g did. imo. what if toho is gonna link monarch into this film.. now that opens up possibilities. In the interest of considering which Godzilla is more powerful, I'll prefer to put aside Toho's claim that ShinGoji is the most powerful incarnation of Godzilla to date and look at the evidence regarding size, durability, weaknesses, abilities, and relevant aspects of their story-lines that has been presented to us so far:

Shin Godzilla (I'll address his abilities while trying to withhold any major spoilers or key plot points, but be forewarned nonetheless)

Size: The largest incarnation to date, Shin Godzilla has the upper hand as far as strictly size is concerned

Durability: Extremely durable hide, mutations including protective eye membranes, and takes small and large arms fire with no discernible reaction (this is more or less consistent with most iterations of Godzilla, with no significant feats yet)

Weaknesses: Briefly stated to limit the amount of information spoiled (SPOILERS), Shin Godzilla has very powerful offensive abilities, but utilizing them costs a physical toll (the extent of which you'll witness for yourself in the movie) along with other vulnerabilities key to the plot

History: Shin Godzilla is a very recent mutation with an evolution ladder; withholding key plot elements, this Godzilla is comparably "young" but progresses through its various stages very quickly, suggesting room for growth but also a notable lack of experience combating near-power adversaries (this is further evidenced by a scene in which ShinGoji "figures out" how to use his powers); to summarize, ShinGoji has further potential but is very inexperienced fighting other kaiju - we not know his full potential

Now, for Legendary's Godzilla (I assume I can discuss this section more freely without concern of omitting spoilers):

Weaknesses: LegeGoji shows a visible reaction when taking large arms fire to regions of his neck; however, the idea that this physically damages him contradicts the notion that he can survive a point blank nuclear explosion (history), so another explanation is required (we can only postulate - perhaps he inhaled the emissions and what we saw was LegeGoji turning his head and coughing); also weakness to the biological EMP produced by the MUTOs (history)

Abilities: Energy beam that appears (? - history) to be on the weaker spectrum of iterations, functional arms

History: The greater ac***ulation of information we have regarding LegeGoji allows us to understand how much we don't understand his full capabilities (similar to ShinGoji's growth potential), so this will be very lengthy. The main points to consider include his feat surviving a nuclear blast at point blank, EMP weakness, and energy beam, which are rather intertwined discussions.

Considering the nuclear survival feat absolutely requires suspension of disbelief for those who understand what surviving a nuclear blast entails; for those who do not have the full picture, allow me to elaborate to the extent of my understanding. A star attains fission through the force of gravity and its own mass and so burns at a relatively "low" temperature (around 8,000,000 degrees Celsius or 15,000,000 Fahrenheit for our sun in particular) over the course of billions of years; a nuclear blast is over in seconds and this significantly shorter reaction rate can only be achieved if the reaction temperature is much higher, by as much as a magnitude of ten (which literally ignites the surrounding atmosphere). And this is only the thermal output. For a one megaton blast, the gamma emissions will vaporize organic matter within a fifteen square kilometer (six square mile) areasurrounding ground zero before any sensory input has time to reach the brain; how big was the blast depicted in G2014? To be specific, the intro sequence involved Godzilla tanking a point blank nuclear blast at the Bikini Atolls in 1954, the year of his appearance, which means the nuclear blast in question was produced by the "Castle Bravo" bomb - a fifteen megatonyield nuclear device (note that the naval officer in the movie inaccurately compared the yield of past and modern nuclear weapons). And we haven't begun to discuss the pressure wave or the gale force winds; for those victims who survive the gamma and thermal outputs, the pressure wave approaching miles from the epicenter is enough to induce bleeding from every orifice. That LegeGoji survived such a nuclear detonation at point blank makes the notion that a tank shell physically damaged him laughable, and requires another explanation (cough cough?). LegeGoji's durability is impossibly astounding for such a feat.

Now, the EMP weakness is described in the official novelization as a biological function that the MUTOs evolved to disable LegeGoji's ability to utilize his energy beam, as the two species were constantly at odds in prehistoric times. Putting the questions of whether this biological function can be replicated by humans or if it's a unique ability aside, we have to reconsider the output of LegeGoji's energy beam depicted in the movie. The movie portrayed the MUTOs, FEMUTO in particular, as walking, biological EMP emitters with a significant sphere of influence and we now know its primary evolutionary function was to prevent LegeGoji from using his energy beam. This in mind, LegeGoji's ability to surpass thiskryptonite-like disability and still utilize his energy beam while in the exact vicinity of the FEMUTO suggests that he and his energy beam must be significantly more powerful than initial observation provides. Drawing again on the metaphorical comparison, if Superman is reduced to the strength of a human in the presence of kryptonite, we can only begin to imagine how many more orders of magnitude LegeGoji's energy beam's power actually is (and whether the sequels will reflect this or not).

And as a last observation, LegeGoji is a being that has survived since prehistoric times, which indicates immeasurable experience surviving on a planet that once was inhabited by similar organisms, for example the MUTOs. Note that MUTOs were parasitic hunters that would implant their eggs into others of Godzilla's kind. LegeGoji waking from eons of slumber to hunt down the MUTOs across an ocean displays remarkable confidence in his experience, as a (slightly exaggerated) comparison might be to that of Ripley hunting down two Xenomorphs. He undoubtedly has experience facing (and outlasting) his kaiju peers.

To recap, we have not fully witnessed either Godzilla's full potential, and there is an astounding gap (mostly a lack of knowledge as we wait for further expansion in either story-line) before we can fully expand on our comprehension of either iteration. This concession aside, and considering the available evidence I have laid out, what is your opinion?

sonictiger replied to How Would I Change Godzilla: King of The Monsters (2019)?
More Godzilla Fandom Activity