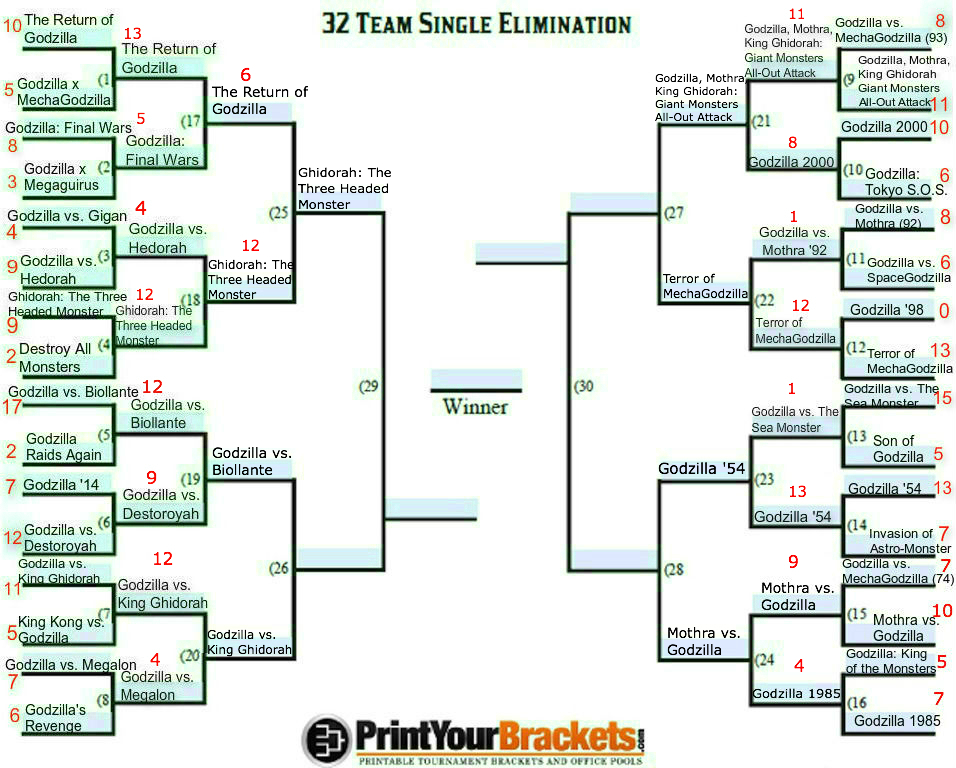 Even though my vote doesn't count here since I already voted on Twitter. Godzilla vs. Biollante wins this. It's a film carried by both the acting and the special effects.

Ghidorah through Destoroyah is overly sparkling and way too much glitter. Ghidorah is a okay movie but, it's nowhere near the same level as Biollante.

^Interesting opinion. And I type that legitimately intrigued.

GAMAN2887 - Oh, yeesh! I am extremely fond of both of these films; however, Godzilla vs. Biollante has ever held a few points of contention for me  - not the least of which is the Republic of Saradia! That had to be one of the goofiest things in the entire film! I understand that the film was attempting to distance itself from reality by a slight margin, but the accent of those gentlemen  - gosh! The scene in which the half-heartedly designed sprout erupts from the waters near the dock and the much maligned "Kiss you guys..." moment also stand out in glaring fashion when I think about Godzilla vs Biollante. With that being said, Biollante, herself, was a fantastically designed monster, and Bio-Goji's design is one of my all-time favorites! Even so, the film's drawbacks (according only to myself) are too heavy. As such, I will marginally cast my vote in favor of Godzilla vs Ghidorah! :)

While I've come to see I like Godzilla vs King Ghidorah more than most, I don't think it compares to Godzilla vs Biollante having a fairly small cast in comparison, but besides Shindo doesnt't leave as much of in impression on me.

There's also the fact that while the GhidoGoji makes small changes that aguably make it better than the BioGoji suit it had an amazing design to go off, in comparison with the Biogoji which looks far superior to the suit before it.

Godzilla vs Biollante wins this for me

@GMan2887 - Quite honestly, neither is a  favorite of mine. Like many here, the Heisei series was a low(er) point in quality for me. There are things I love about GVsB. The new G design, Biollante's design, certain scenes. Biollante holds together much better from a plot standpoint than the convoluted GVsKG, but as a piece of entertainment and a Godzilla movie that I would re-watch, I would go with King Ghidorah. Faint praise on my part, I know. Quite honestly, neither would have gotten as far as they have with me had they been paired against better competition earlier. Although truth be told, I voted for KKVsG over GVsKG in round 1.

The crime for me is going to be having to choose between G54 or MVsG (64) in the next round, and that one or possibly neither of those will make it to the final round.

I don't know how much I agree with the sentiment of either movie going out sooner if they'd been paired against competition earlier. While they did definitely get put on an easier side of the bracket, I can't think of but 5-6 movies that I could see definitely beating Godzilla vs Biollante and only a few more being in that scenario compared to Godzilla vs King Ghidorah just by looking how this bracket has played out and the competition both beat to get to this position. Unless they both got terrible draws I don't see many scenarios where at least one doesn't get to the quarter finals where they are now.

@Durp004 - "Quite honestly, neither would have gotten as far as they have with me had they been paired against better competition earlier. "

That's completely my opinion, and not the majority. Like I mentioned, I picked King Kong Vs Godzilla over GVsKG in the first round, but King Ghidorah won.

KoldWarKid62,
You're not entirely off. I'm working this bracket on another forum as well and Godzilla vs. King Ghidorah was out after round 1. I look forward to comparing the two and sharing the results as both, generally, seem to represent a different type/age group of fans.

I have to go with GvKG for one reason: The Score.

While Biollante brought back a lot of Akira Ifukube pieces, The music editing was all over the place.

King Ghidorah actually brought back Ifukube himself. Writing new pieces while still keeping the most famous scores.
This scene in particular:

The Ifukube music, the thunderous footsteps, the greatest roar in the history of Godzilla

I vote for Godzilla vs. Biollante. I thought the score was great and the story/plot is so much easier to understand than the poorly thought-out convoluted stuff in G vs. KG.

Godzilla vs Biollante gets my vote for this.

^"Japan" is fairly broad. Nihon TV's voter base elected the movie the best.

Yeah, yeah. It's still quite something that one of the most disappointing films in terms of box office has grown in popularity amongst fans over the years.

Meh. Both of these films are in the middle of the pack for me. I enjoy both of them to a point, but since I have to choose 1 I go with Godzilla vs. King Gidorah. Time traveling and those cute little Dorats put it over the edge for me.