Your favorite part of the Godzilla Resurgence trailer

I've watched the new trailer for Godzilla Resurgence so many times now and I'm sure many of you have as well. I'm wondering what everyone's favorite scenes were. Did you enjoy the trailer? What part was your favorite? Let me know below!

My favorite part has to be when the Tank swivels around and fires off a shot at Shin-Goji as well as the scene when the Helicopter hovers in front of Shin-Goji as Godzilla looks unphased by the military's attack. It really gives you the sense that this Godzilla is indestructible and that he's here to wreck havoc. I like how he isn't your friendly, do-good children's hero. This is a terrifying, force of nature, as Godzilla was always intended to be.

19 Responses to Your favorite part of the Godzilla Resurgence trailer

There is so much of the trailer to love. Where does one start? I love that first frontal shot of Godzilla. Then, there's the shot of him showing his great height. Love the scene with the person signing during the briefing. Then there's the wide shot with Godzilla in the distance.

This trailer is beautiful.

It's hard to choose one scene. And the score: moving and riveting at the same time. It conveys a profound sense of urgency, while being emotional as well. It feels that things are moving toward an inevitable climax. I hope it's in the film.

We need to see this film, Shin Gojira, in North America. We need for you to weigh in on behalf of the fans here, and get this Godzilla released here theatrically. I have a profound feeling that Shin Gojira is going to be special.

CHRIS PICARD - Oh, gosh! That is a compelling and difficult question to answer. Hmm...I would have to say that my favorite scene was the one in which Godzilla is striding slowly through the nighttime city - visible in the distance as a massive and ominous figure! :)

SR, I would have to agree with you.

JAMAAL and DARTHJPSPINOREX65 - It is such a wonderfully ominous scene! :)

Not sure... Probably the shot of Godzilla walking through the city with all the helicopters shooting at him.

The responses here are an indication of just how much the trailer has to offer. This first look at Shin Gojira is one of the best 93 seconds I've seen. We got enough of the Shin-Goji to get an idea as to how it looks 'in action' without getting too much, so that the mystery and joy of the actual reveal in the film remains. The trailer did make me wonder as to how much Godzilla will be onscreen. I have a feeling that it'll be more than in the Legendary film. Not that Toho is trying to 'make a point.'

I also get the impression from the trailer and the selection of the screenwriter that the human drama will be textured and well thought out. And 328 cameos? Can't say that I blame them for wanting to be in this one. This is just another reason to anticipate Shin Gojira. And I love this title and what it means. To me, it means a true Godzilla film that is actually evocative of that great, moving, terrifying, thought-proving film. The trailer was a glimpse into what just could be the fulfillment of a cherished promise, story-wise, visually and in terms of overall experience.

It's just a gut feeling, a sense that this film is going to be special. I mean, look at the creative minds and hands behind it: Hideaki Anno, Shinji Higuchi, Mahiro Maeda, Takayuki Takeya, Katsuro Onoue, Takashi Yamazaki. And the fact that the co-directors are longtime friends and collaborators-not to mention their resumes and their proven talents and artistic abilities. Then there's the time devoted to the film's production and the development of the story. Last week's trailer is just an indication of, a look into, what is being put into this Godzilla film. Early on, a 'source' in the production said that Shin Gojira would be along the lines of Gojira, but more terrifying. To me, this meant a direction had been arrived at, with a focus and intent for this film. This was (and is) reassuring; that a quality, serious and well-made film was being given the attention required given the character, the series and the art form. I think that we were all hoping that Toho would one day make more Godzilla films. So, the anticipation is intense.

This is a great thing to look forward to.

First post wins.  I agree COMPLETELY with Gman.  My least favorite aspects of the trailer, however, is the music and the roar shot (pictured).  It looked pretty stiff and cheap.  Just being honest here.

But I do agree with Jamaal otherwise. I think the human element will be richer. In my opinion, I would prefer a Godzilla film not focus on 1 or 2 central human characters, but a set characters at multiple levels. As for the score, I appreciate what it's going for, but I just don't like it. And, again, other than the cheap looking face/roar shot, everything else looked great!

@Boilerbuzz, I think the roar shot is actually a lot faster than it would be in the movie. I think they used a classic roar and had to speed him up to match that, but if you look at it his movement, it seems like its more a long, slow roar of agony that's been sped up. I also think it's cheesy the speed it moves, so I'm hoping I'm right.

I love the two shots of Godzilla from the front, the one from the beginning and the one where the tanks have just shot out his knees and he just does not care.

I gotta say I've been a big Hideaki Anno fan since I watched Evangelion 13 years ago, and I think we haven't even begun to see the best that this movie has to offer.

This is from the recent series of Evangelion movies, kinda shows Anno's style and the scale of the destruction. I'm so excited. I have to go with this shot, with Goji slowly rampaging through the city on a wide shot. Something about this being at dusk, looking at the city and imagining this would normally be when everyone is relaxing at home, but this massive force has driven people from their homes. There's also nothing being done, no military trying to contain him, as if everyone has given up at this point. This shot gives me chills every time I watch the trailer. 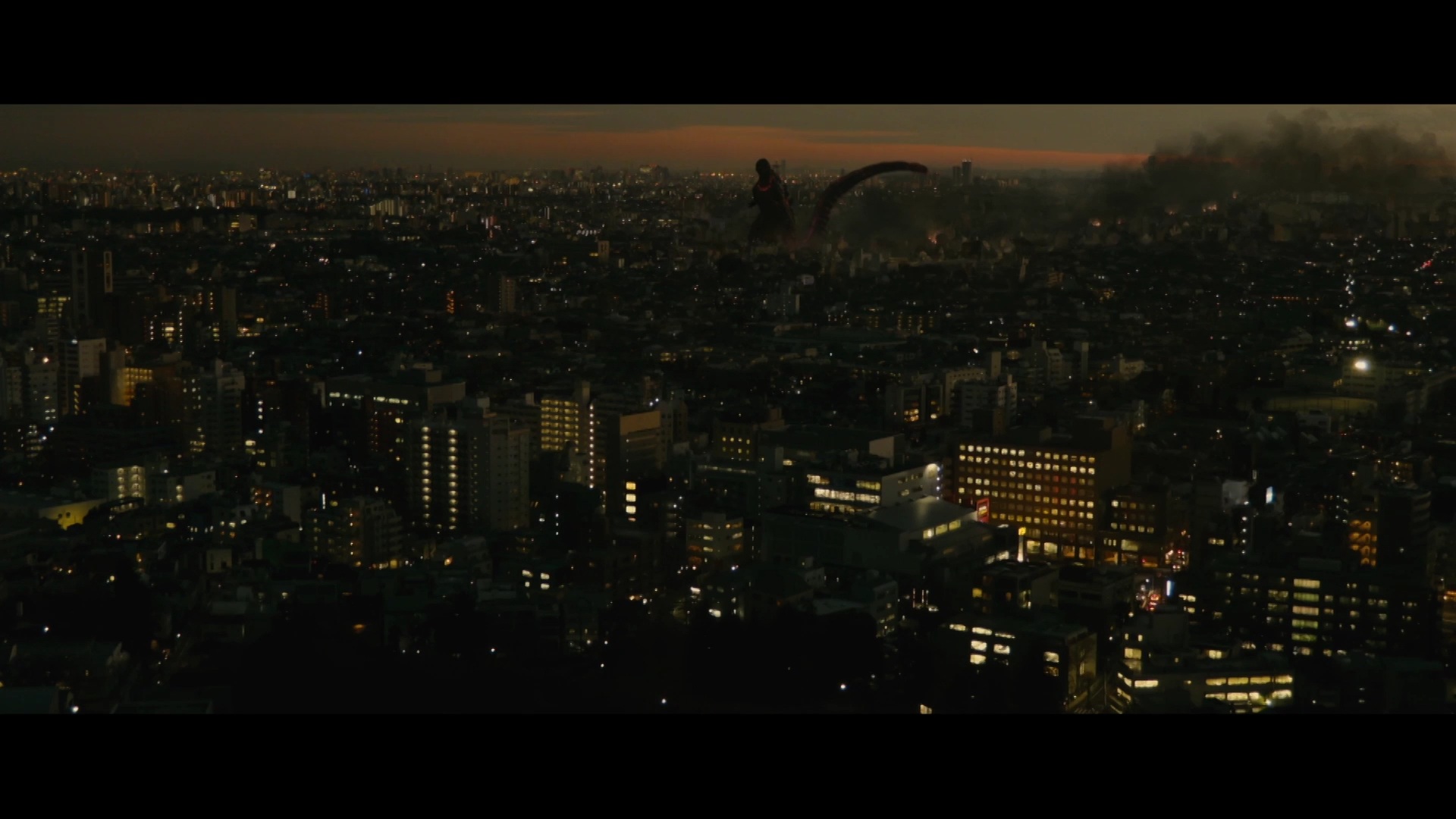 I have to go with what Gman2887 posted along with this.

This is just so bone chilling to look at. It reminds me so much of Japan's military struggle against Godzilla in the original 1954 film. On top of that, it's just awesome. I am really eager to see this film no matter the cost.