How did Anguirus Die in the Monsterverse, and How did Godzilla and King Ghidorah Become Rivals? (Theory) 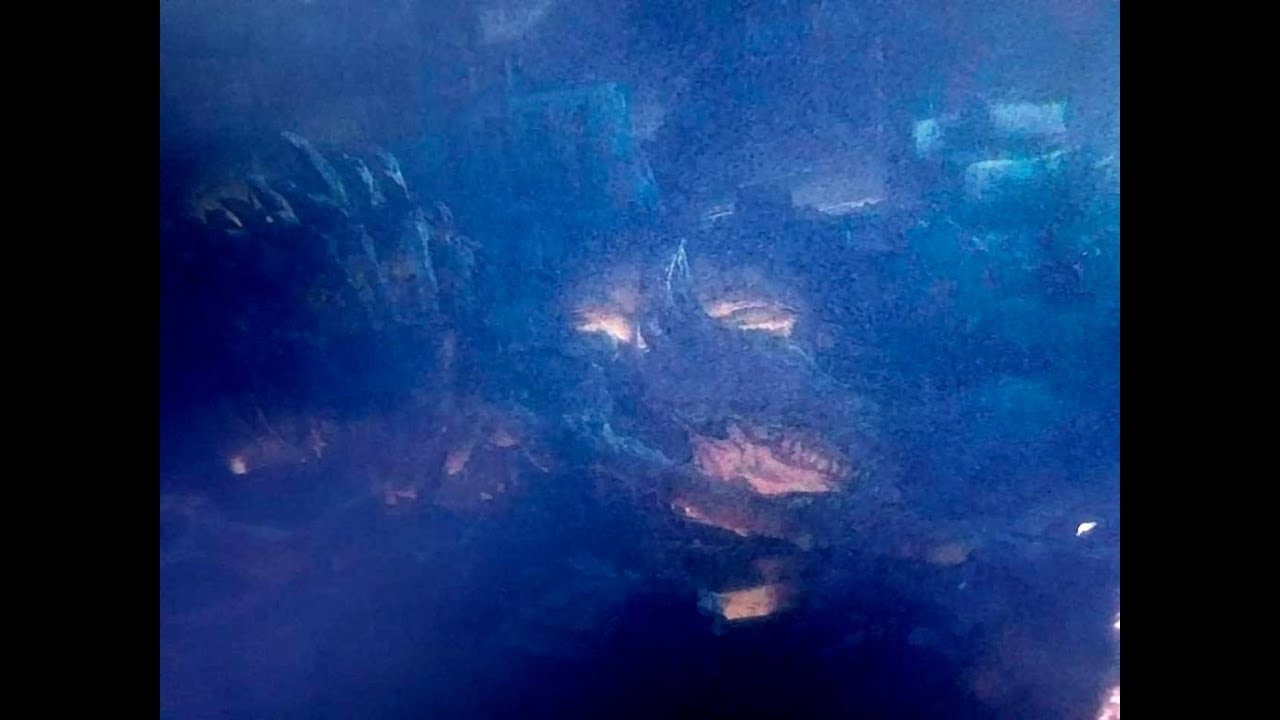 After Looking Closely at KOTM, you can see Anguirus's Skeleton in Godzillas Home as the Nuclear Bomb went Off. But the Question is how did Anguirus Die? He Looked Like Godzillas Dog. Here is the Skeleton Drawn out and Sketched. 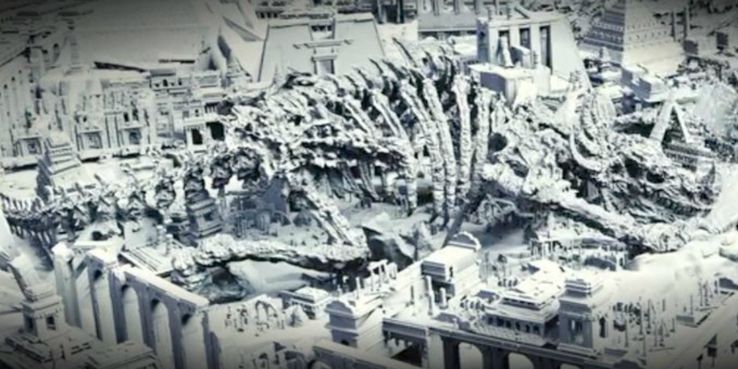 After Looking Closely, It's no Doubt its Anguirus. when you zoom in, There is A lot of bite marks and shocked parts of the Skeleton that shows he has been attacked.

After KOTM, Michael Dougherty Confirmed that Godzilla and King Ghidorah Fought in Antarctica Long Ago and Godzilla Won. Godzilla Wouldn't Have Attacked Ghidorah if Something Set Him Off or Sensed that he was a Threat. 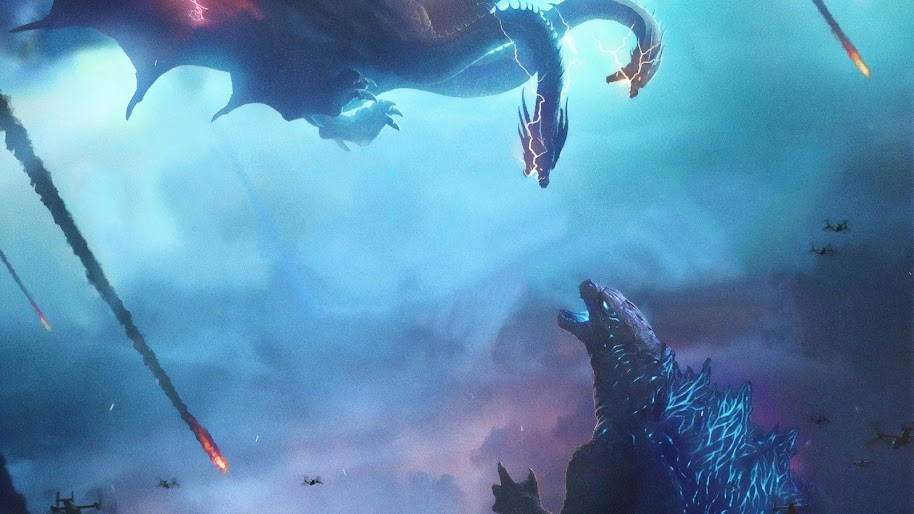 Godzilla Must have been mad at Ghidorah for Killing something. That could be Anguirus, Just look at the past movies of the Friendship of Godzilla and Anguirus, well... except Godzilla Raids Again...

Now with that being said, Here is my Theory on how Anguirus Died. Also my Theory on How Godzilla and King Ghidorah Became Rivals. 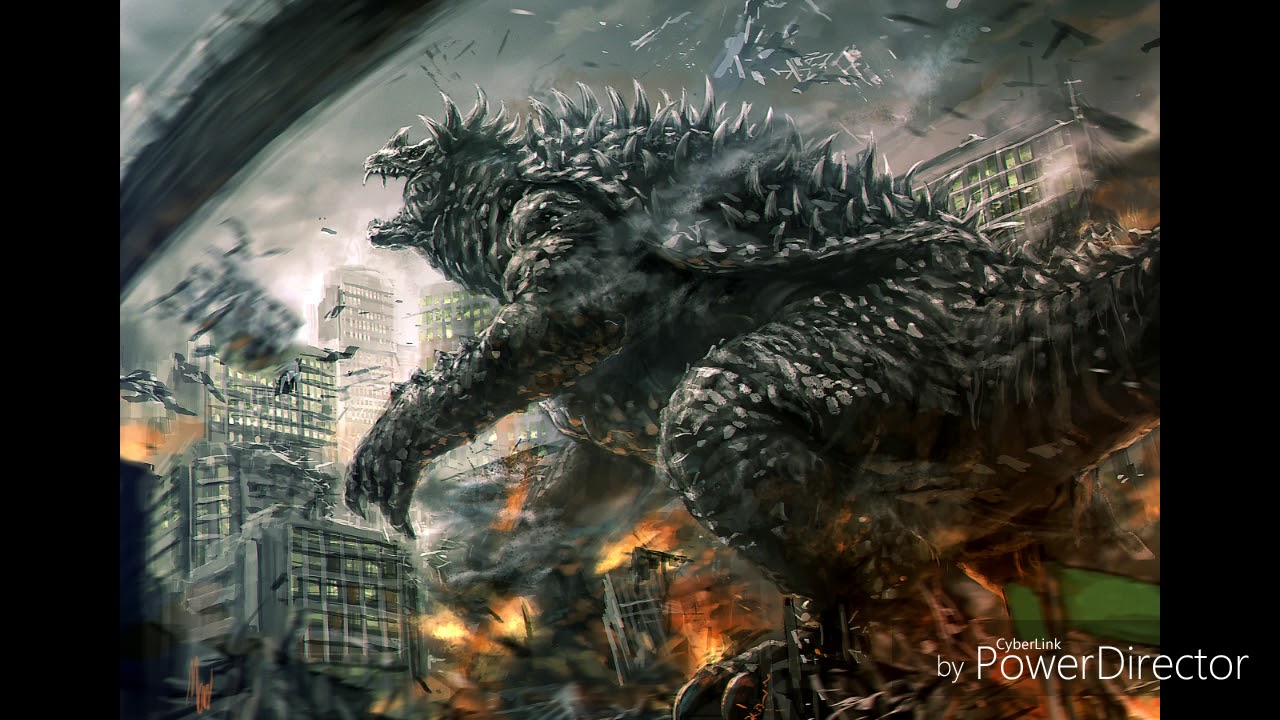 Anguirus was probably Alone on Earth Just Minding his own Business, Suddenly a Soaring Shreek could be Heard, He Gets into a Defensive Stance, Then Ghidorah Flies Down and Grabs Anguirus by the Shell with his Talons, Godzilla Hears the Commotion from Miles away and Swims as Fast as he Can to Help his Friend. Anguirs Bites Ghdiorah's Leg and Roars, Ghidorah Shakes Anguirus off his Leg and Bites on Anguirus's Head. Godzilla Pushes his Tail Back and Fourth in the Water to Try to get to Anguirus as fast as he Can, Anguirus Roars in pain. Blood Sprays from Anguirus's Neck, Ghidorah Flies Upwards and Lifts anguirus up with his left and Right Heads, he Charges up and Fires his Gravity Beams at Anguirus's Stomach, Anguirus Roars in Pain Again and Falls Down to the Ground with a Massive Earthquake Rumble, Ghidorah Roars in Victory and Flies into the Clouds, Godzilla Arrives and Sees Ghdiorah FLying off in the Distance, He looks at Anguirus and is Devastated at what happened, Anguirus was on the Ground all Bloody and had Dirt all over him. Anguirus Didn't Make it. Godzilla Roars in Anger, After being Shocked at what Ghidorah Did to Anguirus, Godzilla Drags Anguirus's Body Down to his Home and Lays it down for a Ceremony, he  he is sad that his "Pet Dog" Died, He Then Promises that he will Guard Anguirus's Body at All Costs.

And that is how Anguirus Died and How Godzilla and King Ghidorah became Rivals.

PICK YOUR TITAN
20 Responses to How did Anguirus Die in the Monsterverse, and How did Godzilla and King Ghidorah Become Rivals? (Theory)

Mmmmmm. I don't think so. I think people think that Titanus Methuselah is Anguirus, or something similar to him.

Ok. a lot of people say that it could or couldn't be Anguirus. Mike Dougherty teased that there was a possibility of an Anguirus easter egg, but it was never made clear, but in the home release special features, it does confirm it. But it doesn't make sense since Legendary doesn't have the rights to him, so maybe Anguirus could show up in a later film and that the Anguirus skeleton could may or may not be the Toho monster, as said by Dougherty:

The skeleton of a creature that might or might not be Anguirus is briefly visible in one shot, just outside Godzilla’s underwater lair. https://t.co/7oBr1irR6H pic.twitter.com/mK0vBQd5mn

I think Godzilla killed it. It's outside Godzilla temple and Anguirus was originally an opponent of Godzilla. Maybe there were multiple Titans (including Anguirus) that tried to storm Godzilla's temple but failed

But why would Anguirus storm his temple?

Because just like Ghidorah, the titans want to overthrow the King and become de alpha themselves.

But Anguirus wouldn't be considered as another alpha. He looks more like he would fight because of the classic "Ankylosaur vs. Predatory dinosaur" logic. But the theory still does look plausible, even if it is a bit of a stretch.

The thing is, why don't we see other skeletons of monsters who tried to storm area 51-I MEAN GODZIILA'S TEMPLE/

Hey, Anguirus is a tough kaiju, he might have gotten the furthest. Also, we only see a small bit of the road to the temple, maybe there are more skeletons off-screen.

What if Titanus Scylla is a new version of Kumonga?

I think all these theories are possible, but I think the storming one makes more sense because if Anguirus was buried because he was an ally, what about all of Godzilla's other allies? Where are their rotting corpses?

And meanwhile, neither Gorosaurus nor Godzilla Jr. have appeared in the Monsterverse, even though it would be awesome if they did.

You just love dinosaurs, don't ya?

Yes I do. And I always will. That's also why I love the Godzilla franchise.

How long have you've loved dinosaurs?