It's happening! Yes, the rumors are true, Godzilla vs King Kong is a go!

The classic film match-up is finally returning to Hollywood screens. This has been reported by multiple news websites and is official, I truly can't believe it.

I mean, we all knew it was coming after the announcement of Skull Island 2017 and Godzilla 2014's success. It was bound to happen, and I certainly am psyched. It seems this will be Godzilla 3, as it is coming in 2020. Two years after Godzilla 2.

This film will most likely deal with Kong and Godzilla battling against a mutual enemy. It may begin with them fighting, but I highly doubt either of them are going to die or be beaten.

Overall, I can't wait. I was skeptical at first about this, but after hearing it confirmed, this film is going to be truly amazing. A spectacle, I hope.

No just no! plz just no!

OMG this is the worst most stupidest-est idea EVER ... the first time. A second time... even ten times stupider. We want both ... but not together. The idiot's in hollywood who thought this was a good idea should be sent home to work in a dying DVD store. Sheesh.

It appears they will be scaling Kong up BIG TIME for this film.

Take a look at this image of the Kong: Skull Island set in Hawaii:

For those who are saying "No, this is the worst idea " do you honestly think the general audience knows who Biollante, gigan, Destoroyah are? No, they do not.

They know who Kong is. "Well, the legendary Godzilla is 108 meters tall and Kong is only 8 meters tall." So? People that are fans forget that the Japanese Kong is not the same creature from the 1933 classic by Fray Wray. Legendary will more than likely up Kong's size to roughly 80 meters. That's what Toho did back in 1962. Not 80 meters but 45 so that Kong could be a great equal to Godzilla.

The fact of the matter is, this movie, if done correctly, will put people's butts in seats and God only knows how much money it would make if, and that's a big IF, these companies handle it respectfully and treat it serious. The 1962 film did not take itself seriously. It was a comedy style Godzilla film and it worked.

Yes, I'm aware this is not "realistic"  but the fact of the matter is Godzilla was never intended to be "realistic."

First things first, we have to see how successful both Kong skull island and Godzilla 2 are.

It is indeed!  Its one of several photos that have been taken of the set, now being constructed in Hawaii.  The skull is likely red so it can be manipulated in the computer later (via the same principal as the green screen). 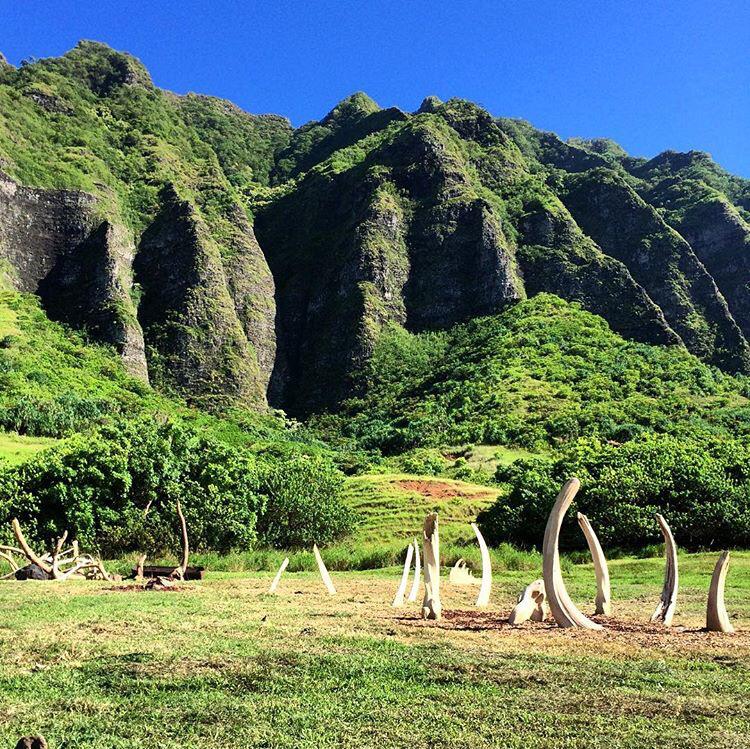 @Danzilla, can you link me to the source of those set photos? Would really appreciate that! Thank you!

Danzilla,
Yeah why hasn't this stuff been more widespread? Shoot us the information, we'd like to get it out there. Or you could write the article for it.

Everyone else,
In any case I can't believe some people are so against this. To paraphrase myself from earlier comments, we didn't ask for this movie, but I'm not about to turn it down. The idea is iconic and a whole lot of fun, and yes it will make more money than Skull Island and Godzilla 2. It's simply the type of match-up that will get the general audience in theaters.

Godzilla vs. Kong will just make more money than, say... a remake of Godzilla vs. Destoroyah. No one in America really knows who Destoroyah is. Nor do they care. But if Godzilla vs. Kong makes as much money as I think it will then there will be plenty more Godzilla/kaiju films to be released. Isn't a movie that will most assuredly keep the franchise/genre afloat worth supporting and getting excited for? I think so.

I don't think it's going to make much money.

^Then you sir, would not make a very good producer.

There is no doubt a movie titled "Godzilla vs. Kong" will get people in theaters based on the marquee value alone. It's like the Avengers or Batman vs. Superman. General audiences understand the value in something like that. It seems fans don't get it and I don't understand why they're so blind to it.

⬆ you honestly think people who are not Godzilla fans know who Destoroyah, gigan, and Biollante are? I don't think so.

Let's say Godzilla was to fight Destoroyah in the 3rd film. How much money do you think it would make?

Godzilla vs. King Kong would more or less make what Jurassic world did opening week. As long as this movie is done correctly and is serious, I guaranteed you that it would destroy box offices the world over.

I don't think it's going to be done correctly.

I don't think it has to be done correctly in order to be a hit. Jurassic World's is a flawed muffin that's hardly done "correctly" in terms of top notch filmmaking and it made more money than it really deserved. By the time people figure out if it's done correctly they will have all seen it for the title alone. Or just have too much fun with it to really care.

Ok, but what about Kong's size?

^They will increase his size. Just like Toho did with their Kong.

Kong has jumped in size just about as much as Godzilla.

What's wrong with Kong jumping up to 80 meters? Nothing.

"It's not realistic! " I've heard this about a million times. The thing about Godzilla is, he was never intended to be "realistic."

^As long as King Kong is big enough to fight Godzilla, I don't care what his height is. 80 meters does sound good though.

I personally love the idea. It will be interesting to see how they handle the dynamics of the monsters (antagonist, protagonist, etc.), as well as the size difference.

This making boatloads of money is NOT a foregone conclusion however. It really depends on how Kong: Skull Island and Godzilla 2 perform. If either one or both underperform you can probably scratch this matchup off the list.

Peter Jackson’s King Kong and Pacific Rim (both of which I love), totally underperformed domestically. In fact China saved PR from being the “John Carter” of giant monster movies and gave some hope for a sequel. We’re all well aware of G14’s performance and expectations for its sequel.

So, as excited as some of us may be for this, time will tell if the rest of the world will be as well.

^Quite true. We all know how the plans for "The Amazing Spider-Man 3" have turned out. Godzilla 2 and Skull Island need to make bank.

Kong's size? That's the barely a hurdle compared to other things leading to this movie.

^Totally agree on the size thing. They'll work it out one way or another.

I think it would be funny if Kong were his 25-30 ft size riding on Godzilla's shoulder. "Say hello to my little friend!!", Godzilla says in his best Pacino/Scarface voice!

..For one thing, the original King Kong film’s period setting has been scrapped.

“It’s not set in the ’30s,” said Hiddleston at Wednesday’s premiere of “Crimson Peak.” “There’s no movie director with a map. There’s no out-of-work actress down on her luck. All of that stuff is respected, we’re just trying to do something new with the myth because Kong is an icon of movies. I think he’s someone people want to see again.”

He is particularly impressed by director Jordan Vogt-Roberts’ (“Kings of Summer”) vision for the picture, saying he has “come up with the most incredible, deeply imaginative context for [King Kong] to exist in.”

“Kong: Skull Island” co-stars Brie Larson and Samuel L. Jackson. It hits theaters in 2017. The hope is that this film will lead into a monster mashup, with a “Godzilla vs King Kong” movie due in 2020....