A (Entirely Unnoticed) Clue Regarding What the MUTOs Look Like. If you're curious about how the MUTOs will look: Think about what this movie was called during the earliest stages of its development, and pair that with Edward's previous fondness for designing creatures that resemble cephalopods.

PICK YOUR TITAN
13 Responses to A (Entirely Unnoticed) Clue Regarding What the MUTOs Look Like.

My guess would be cuttlefish...I recall a codename Nautilus being used during the intial filming, IIRC.

I'm thinking they'll be more arachnid/insect-like. But who knows? It might be a mix of many types of lifeforms.

Japanese Spider Crab maybe? I know it's not a Cephalopod, but it may be an option. So you guys haven't seen this: http://www.youtube.com/watch?v=l6J71Q_W8Jw

There's misleading information about the Muto toy (somebody apparently doesn't read news so often) so don't care about that!

Aaaaaaand your point METALJAZZFUNK is... what exactly?

Do you have proof to back up your opinion? Perhaps an interview with a member of the Legendary crew who worked on the project and knows what the MUTOs will look like?

I didn't think so. The title of the film being "nautilus" during its pre-production and production phases means nothing in regards to the final product. There's no reason to believe that the MUTOs will look like anything from Gareth's previous works. After all, it's only one movie. If Gareth had made twenty films and used the same designs over and over again, then yes, we'd have reason to believe it. But the fact that it was only one movie which used such designs means nothing in regards to this film.

If there is a sea going "nautilus" type MUTO in this film, then pat yourself on the back for an extremely lucky guess. Otherwise, stop trying to pretend you know something that everyone else doesn't. Your choice of words and phrasing make it sound as if you think you know something for a fact when it's just your opinion.

And KAIJUUFIN, that movie doesn't prove anything. Whatever it is in that tiny snippet of the trailer has not been confirmed as a head at all. It could be any part of the MUTO for all we know. A foreclaw, a leg, a mouth, anything. Nothing is confirmed just because you think you see something. When I watch that in the trailer, I turn up the brigtness to max and I see no eyes at all, just a small shadow under an uneven lump of flesh or wahtever its skin is made of. I have the trailer in 1080p on my desktop and I've slowed it down an obscene amount of times to get the best look possible and even froze the frame altogether.

Nothing about that snippet has been confirmed, so please stop trying to help spread the rumor that there has been. Unless you as well have proof to back up the opinion such as confirmation from a Legendary crew member who put the trailer together, don't speculate fact when it's your opinion. It's a disservice to all your fellow G fans to do so.

Lest we forget the working title of Cloverfield was "Cheese" until they released more info about it. I didn't see one slice of cheese in that movie Not even cheese dip at the party in the beginning. KYERO makes a good point. The only other feature length film Gareth directed was monsters and while they were indeed cephalopod like monsters you can't go based on one film alone. However maybe he does like using that as a monster design and may incorporate it into Godzilla, so at the same time I can't say KYERO is totally correct either. We simply don't know enough about Gareth or his directing style to judge that. The whole point of my comment was basically about the title Nautilus and how that is definitely no way to judge one aspect of an entire film.

I'm not seeing the snideness you're claiming metaljazzfunk is touting in his post, seemed more like speculation and less like "I know it all" in-fact, most of the know it all posts on this forum come from a certain someone... and it isn't metaljazzfunk.

Hey KYERO, you may want to check out the first discussion that I contributed to this forum.

KYERO shut up and calm down! I see the eye and so many else does too! You don't see anything. That's okay. I agree with everything KYERO said except for the part of the eye in the trailer.  I watched it slowed down in 1080p on my 55" LED samsung TV and you with out a doubt see the head, eye and even neck of the muto to the left of the train car. 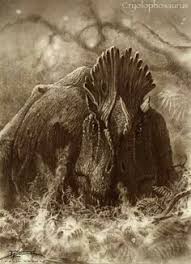 " It is better to be reviled than ignored, agleast then you know your spreading good in this world."