Monsters you want in the MonsterVerse (Movie SPOILERS!)

This is a pretty straightforward topic. This may be a thing already, and if it is, I apologize. However, here I'd like to list my personal wishes for kaiju I want in this film series. You can also list what you want to see in the comments. My list is not in order, by the way. I'd really like to see Gigan because he could have a really cool concept. As shown in the image above, I believe he could appear as some sort of MUTO, but much more powerful and deadly. I think he could be quite the challenge against Godzilla and his friends, due to his sharp blades. 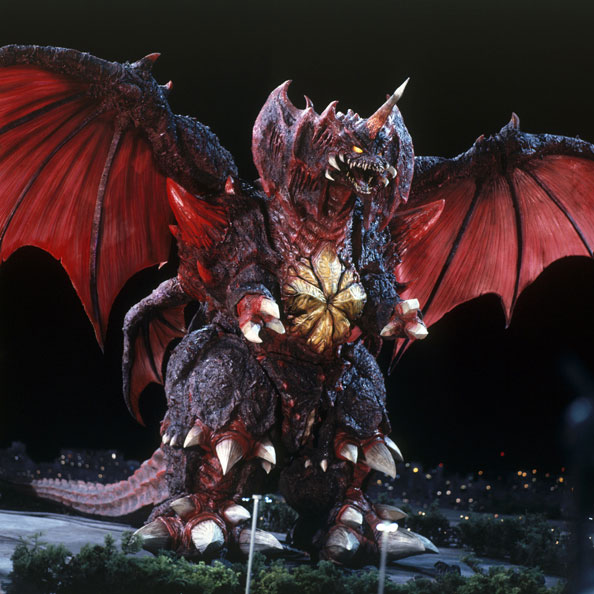 Oh boy, how much I'd give to see Legendary handle this guy. He could have so much potential. He's probably one of the most famous enemies of Godzilla and I'd love to see him again. I think Big G would need some help taking this guy down though, whether it's from Mothra, Kong or even the next guy on the list.

I think this guy is the most deserving of a spot in the MonsterVerse. Known widely as one of Godzilla's closest allies, this prehistoric creature could fit quite nicely into the MonsterVerse series. With Godzilla and probably Rodan both being featured as ancient dinosaur-esque MUTO, this guy could easily fit in with them. He could be a great partner for Godzilla, a mutual ally when it comes to defeating evil monsters such as Ghidorah and such. 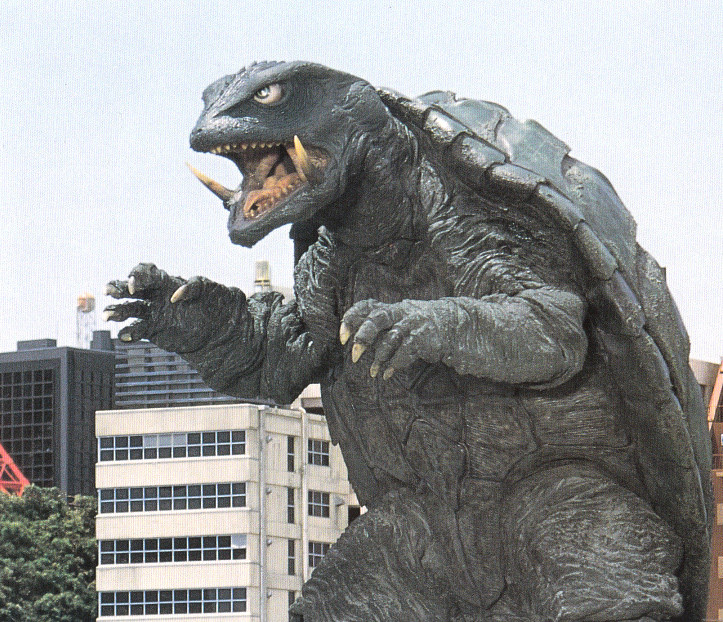 If this happened, this would be my dream come true. I know it's not a likely scenario, but I would literally throw my money at Legendary for them to put Gamera on the big screen - maybe even on the same screen as Godzilla! I see him with a lot of potential, and I hope that it's one day used. It sure would be awesome to see. 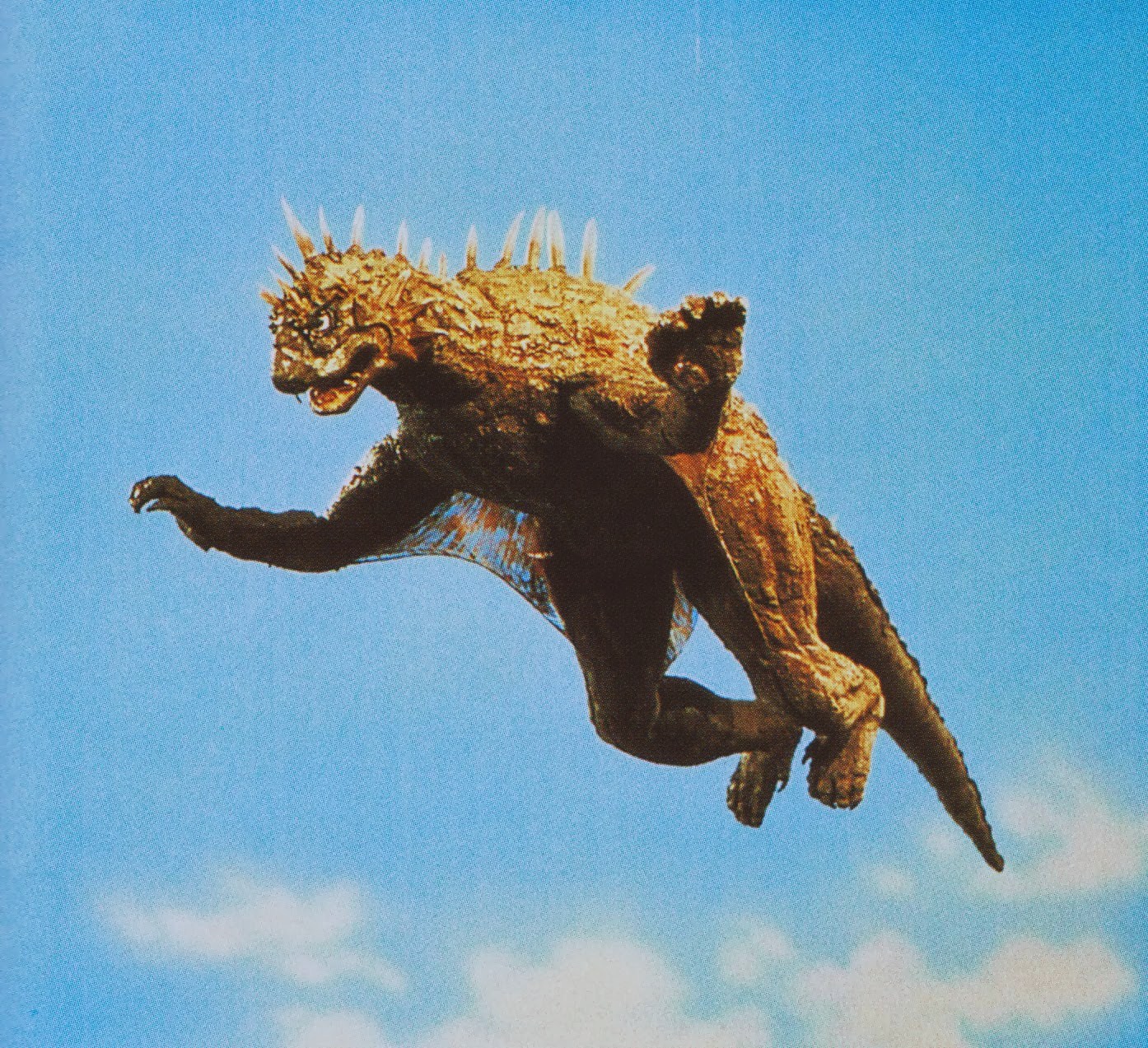 This guy is one of the not as well known Kaiju who I believe still deserves a spot in this roster. As I previously said, I'd love the last film in the MonsterVerse to be something similar to Destroy All Monsters. And Varan appeared in the original, so why couldn't he appear again? Maybe he wouldn't get much of an introduction or spotlight, but he could certainly make an appearance in a few scenes. Maybe a mention or one quick scene with him stomping through a city or engaging in battle with the military/air force. It's always been a smiled-upon idea in that after Godzilla VS Kong, we get a standalone film for Mothra and possibly Rodan as well. And if we get a Mothra movie - I REALLY want Battra to be in it. One of my favorite kaiju of all time, Battra would be a great rival to Mothra that would be pretty sweet to see. I imagine him fighting Mothra at first, but then teaming up with her in order to defeat a greater, more destructive monster. A classic enemy of Kong. In every Kong film, there has been some form of a dinosaur fight, and Gorosaurus is a representation of that. I think that since Kong didn't fight any creatures that were explicitly dinosaur in Skull Island, Gorosaurus or at least something similar to him should be featured in a match against the almighty King. If Gamera gets in the MonsterVerse, I feel like he would only get one or two movies, as he's not too popular here in the states. And, in keeping the MonsterVerse tradition so far, with a mix of old and new enemies facing the star kaiju, I think Gyaos should appear. However, instead of being one single creature, I see Gyaos as an entire colony which attack in large numbers. That would almost make them more of a challenge for Gamera, as too many smaller foes might overwhelm him. I also have the idea that in the MonsterVerse, there would be a Gyaos Queen, which is basically a very large Gyaos that controls the colony and commands them through calls. That would be wicked. One of the most underrated monsters, in my opinion. I think that if Ebirah were included, he would in fact be an enemy of Kong as opposed to Godzilla. I think this because I feel like Ebirah is more fitting for Kong's tropical theme, and also because Ebirah: Horror of the Deep was originally meant to be a King Kong movie. So...can we get some more love for this big crustacean and welcome him into the MonsterVerse? Basically the same as Ebirah. I see him as a Kong monster - a MUTO that the King briefly faces in a fight. I know he's intended to be a Godzilla monster, but I feel like he fits the Kong-style more. I mean, we already have a really big spider on Skull Island - why not make Kumonga one of them? This will be a short entry. I see him working perfectly as another Skull Island kaiju, along with the two previous entries. He'd probably be a group of monsters instead of just one, and he'd probably be a more minor one that doesn't make much of appearance besides a scene or two. Either way, I'd like to see him...or them! I was originally against the idea of this, but I've warmed up to it. I'm thinking that instead of making her a mutant human, I'd say make her a semi-natural creature. Maybe have her as a simple exotic plant that was mutated by the atomic blasts of '54. Or we could have her as a creature created in a lab after experiments involving plants. With options like these, I feel like she is more likely to work out. Whether she is an ally to Godzilla or an enemy (probably the latter) I think she would be a neat addition that many fans would appreciate. Her fighting Godzilla would be spectacular to see! As much I love this goofy robot, I doubt he's very likely at all. I just like him too much to not add him on the list, y'know? With superhero and kaiju genres being pretty popular in movies right now, how about we get a mix of the two in a MonsterVerse movie? Jet Jaguar could be really interesting, with his size changing and all that, so he would be a really unique MUTO. Still, I doubt this is gonna work out well for him. I could see Orga working out in the MonsterVerse, but not in the exact way he worked in Godzilla 2000. Instead of a mutated spaceship or whatnot, I see Orga almost going down the route of Shin Godzilla. I thought that maybe, after a fight or something, Godzilla loses a bit of blood. Said blood falls into the water, and then mutant micro organisms use it to become a hulking creature that has some of Godzilla's features, such as his fins or tail. I could see him also firing Godzilla's atomic breath from his shoulder, like in 2000. I like this idea quite a bit and I feel like it could work out. It might even be becoming more and more likely, as I believe Orga was confirmed for that upcoming Godzilla anime. I don't know for sure. We'll just have to see.

1. Clover (Cloverfield) - Almost impossible. Only here because Cloverfield's one of my favorite Kaiju flicks.

2. King Caesar - In the end, he'd be too similar to Kong. Shame, cause I really like him.

3. Son of Kong/Son of Godzilla - Because Kong and Godzilla are the last of their species and are unlikely to reproduce, as much as I'd want this to happen.

4. Hedorah - Because there's no way mankind could ever create something like that, no matter what chemicals or pollution we use.

5. Any of the Mechas - Because we as a species aren't advanced enough to make those kind of things and it doesn't look like aliens are going to be in this.

Alright - I've said my choices. Now you guys go ahead!

PICK YOUR TITAN
37 Responses to Monsters you want in the MonsterVerse (Movie SPOILERS!)

Regarding Anguirus and Manda, EmptyH, those two are relatively easy to fit in with the current MonsterVerse.

It's Mecha-Godzilla who's the truly hard sell. He's got the raw popularity, but the MonsterVerse hasn't established enough of the wackiness and technobabble necessary to make his inclusion a viable decision yet.

In a few films time, adding more outlandish elements piece-by-piece, we could get to that point. We can't make the mistake of diving in too quickly like many other studios are doing with their own attempts at cinematic universes.

Any Toho monsters that are just overgrown animals can fit in the MonsterVerse.

MECHA GODZILLA ALL THE WAY BRUH!

Battra is in my Mothra story as the villain and Biollante is getting her own story.

Gorosaurus and Manda. I know, probably the last two kaiju you'd expect from me, but seeing as how likely it might be that the Monsterverse may end after GvK in 2020, we might as well get a cool fight scene between Kong and two other creatures on Skull Island (as an homage) before he fights the G-man himself.