I sometimes like to know what has been going on during the events in the Monsterverse. For the kick of it I was scanning the photo of the last production day of Godzilla 2. But one thing stood out a hat with the initials the "USS Scorpion". And it exists in real life, it was sunk in battle in 1968. What really your thoughts on this? What do you think really happened to the sub was it suk in battle? Or was it something else?

PICK YOUR TITAN
8 Responses to The USS Scorpion Incident 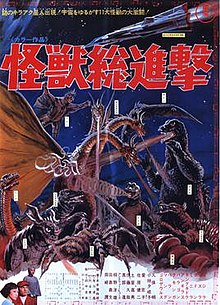 hmmm.... I don't know if that is what USS Scorpion refers to.

i know but its worth mentioning

Mike Dougherty mentioned during a podcast about designing the monsters beyond their four (Godzilla, Mothra, Rodan and Kin Ghidorah). Meaning more monsters are on the way, this could be a new one or an old one but this monster may have been responsible for the sinking of the sub

Yeah but I'm sure they can't be more Toho monsters. Maybe more Muto's? Or different Muto monsters? But I don't think it's referenced to Destroy All Monsters. I hope your on to something however. I hope I'm wrong.

Which podcast did Dougherty mention there would be more monsters beyond the main 4?

The one with Mick Garris, https://www.podcastone.com/episode/Mike-Dougherty-Dario-Argento

It should be in the middle of the podcast but he confirmed it when he was talking about designing the monsters, and while we are in the news of Godzilla 2. Some of the cast have confirmed roles Millie is playing as "Madison Russel", Kyle Chandler is playing as "Mark Russel", and Vera Farmiga is playing as "Dr. Emma Russel", Randy Havens playing as "Randall P. Havens", Van Marten as "Dr. Chens Assistant" and a whole bunch more here's the link: http://www.imdb.com/title/tt3741700/fullcredits?ref_=tt_cl_sm#cast

I highly doubt this,but maybe Manda? Or I could have something to do with that flying Kaiju incident in london.

Trending Articles
Forums & Community
I'm back...with mixed feelings about Godzilla Vs. Kong's sequel 692
What do you think the “colossal, undiscovered threat” will be in the next movie? 2,234
WHY?!? 1,493
What is your favorite godzilla? 1,369
the team's members are growing! 1,504