Yesterday news broke that Toho's next dive into the Godzilla series will be captained by Anno Hideaki (Neon Genesis Evangelion, Nadia: The Secret of Blue Water) and Shinji Higuchi (effects director of the Gamera Trilogy, director of the live-action Attack on Titan). Today western fans get to hear their thoughts on the project and how they became involved.

Thanks to film historian August Ragone, (author of Eiji Tsuburaya: Master of Monsters) the directors' words have been accurately translated, adding fuel to a fandom already ablaze with excitement. 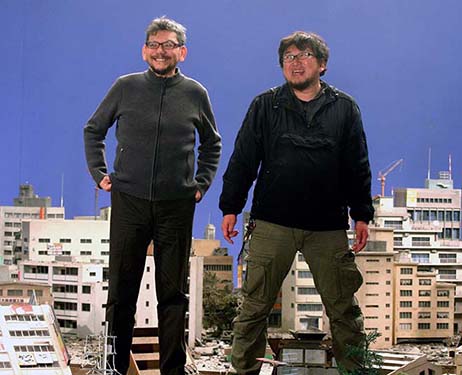 "My prayer is that this will not be just a repeat of science fiction visuals of the past,” said Anno, “...Japan has also been careless in the way it has attempted to depict him [Godzilla].” Although he laments that the budget and production schedule is of concern, he's determined to power through it. “I’m going in full force.”

Higuchi echoed Anno's sentiment. “With my best friend standing alongside me, we will triumph over the pressure,” he continued, “I was born in this country which gave life to this great divinity [Godzilla], which destined me to work in visual effects...”

To read Anno's and Higuchi's complete thoughts on the new movie please visit August Ragone's blog: THE GOOD, THE BAD AND THE GODZILLA.

We thank Mr. Ragone for the hard work he's done reporting for the fandom. Make sure to check out his book, Eiji Tsuburaya: Master of Monsters.