What is your typical G fan like? Is there even such a thing?

What is your typical G fan like? Is there even such a thing as a "typical" G fan?

I asked this because after reading the "why-do-you-like-the-big-G" and "are-you-embarassed-to-be-G-fan" threads, it got me thinking. Reading those threads, I got the impresion that G fans here range from little kids to 50 year olds. So it encompass a large range of folks from different age, gender, social background or education. That is the strength of Godzilla, his ability to appeal to a broad range of people.

So given that diversity, it brings me back to the question, what is your typical G fan like? Is there even such a thing as a "typical" G fan?

If you look at those trekkies, cosplay and otaku people, its easy to label or pigeon-hole them as ...certain type of people (even if that may be unfair to their fandom or to themselves). But G fans defy easy characterization. Sure you got G-fest and other celebrations of the big G, but the fans themselves aren't easy to stereotype or pigeon-hole (which might or might not be a good thing, depending on how you view it). I mean, I don't see a 40 year old dressed up as the Big G in fan conventions, unlike...ahem...some 40 year old who dressed up as Sailor Moon: 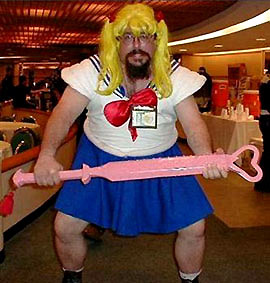 So what is your average "G" fan like? Is there even such a thing as your typical G fan?

PICK YOUR TITAN
11 Responses to What is your typical G fan like? Is there even such a thing?

I prefer not to label fans. All I know is that a Gfan is a person who loves Godzilla or Gamera (hence the "G"). I just watched the movies when I was little and I thought Godzilla was pretty cool, I'm not a freak about it, I'm just excited for the movie.

If you don't eat sleep and breath Godzilla you're not a true fan!

The reason I don't wear a full godzilla suit to G-fest is because it had to be washed since I choose to wear it every single other day. I don't believe there is a typical Godzilla fan. I've met several who cross a lot of age/ethnic/monetary backgrounds and I really don't think you can place a label on them that could stick. But in this day and age, we're sort of getting away from the typical image of the sweaty, overweight Star Wars geek who lives at home with bad skin. Fans can come from anywhere and it would surprise people to see which of us can contact to a fandom. I gurantee you that there will be a 10 yr old girl walking into this movie and less from a decade from now she will be sporting a back piece of Big G at G-Fest 20XX and you would have never guessed by looking at her. I'm loking forward to bringing new poeple into the fandom and being surprised by who they are.

Typical G-fans are actually easy to "label." We are analyzers, speculaters and excited.

We want to know what's going to happen to our big friend.
We make conjectures about what may or may not actually happen or appear.
We get happy at the mere rumor he'll be coming back again.

We're also a lot more cohesive than most fanbases (not going to point fingers anywhere). We don't really jump at or claw people's throats out when they dissaprove of our ridiculous, yet amazing, Godzilla.

So, in all, we are a cohesive society that analyzes, conjectures and anticipates what we love most.

Anyone agree? Anybody got anything to add?

Ha, yup. I bet most average filmgoers would scratch their heads over why we would care Godzilla's spikes should glow or not before his atomic breath or what color the atomic breath should be. But you are a true Godzilla connoisseur if you do care about these things/ :)

Yeah, I'm not going rip the guts out of anyone who hates big G or think its stupid or childish (wrong as they are). I rather spend the time discussing with G fans about the big G. Not like thost twihards who would launch into their rants and ravings whenever someone (usually a guy) suggest their beloved twight series isn't great literature. And Godzilla enjoys a broader fanbase than just teenage girls, hahaha!

@GodzillatheKing123- As much as I agree that Twilight is not an outstanding example of literature, let's refrain from insulting Dracula's disowned nephew's disowned cousins, shall we? We don't need the Twibrats of that fanbase hoarding over here to start a war they will inevitably lose.

As for everything you said, I completely agree with.

Also, how would someone say Godzilla is stupid or childish, when he is, by all evidence, neither of these things? Being the metaphor he was, is and always will be, there is truly nothing stupid or childish about him. Except for his frequent denial of the laws of physics. Poor Megalon.

As a last note, I'd like to point out that where I live, Twilight's fanbase is, sadly enough, comprised of more adult women than teenage girls.

Ha, yes, lets stem the invasion of the twibrats before it gets started. :)