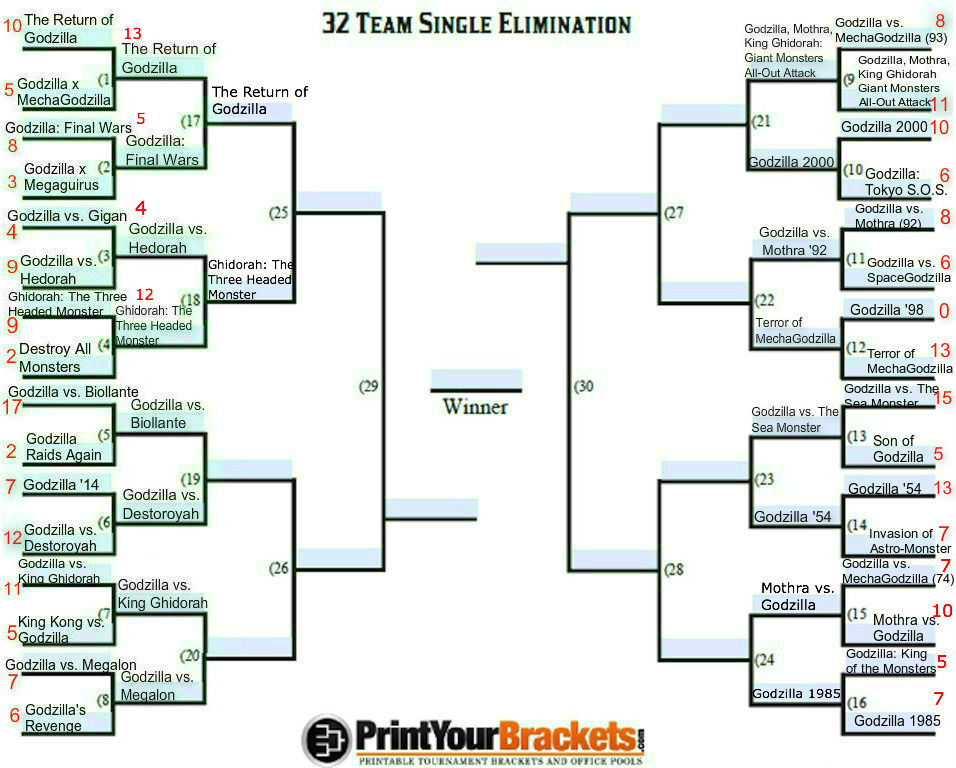 Crap. Why did it have to be two of my favorite films pit against each other? *sigh*

Well, if I did have to choose, it would probably be Destoroyah. It had a good mix of monster action and human characters, the death of Godzilla and Junior was emotional, and the film was a good end to the Heisei series. It brought the series full-circle by having Dez's origins come from the Oxygen Destroyer, which was like having Goji fight the one thing that actually had the power to kill him. VS Biollante may have had better characters, but we only saw her final form onscreen for a few minutes, which was a bummer.

Both movies had a message behind them, but VS Destoroyah made the dangers of nuclear power very apparent by having the whole world at risk due to mankind's mistakes. Biollante was about what comes from trifling with nature and attemtping to control it.

So, despite how much I love both of these films, I would have to go with Goji vs Destoroyah.

I cast my vote for Biollante, all day every day.

I liked Destroyah, but I found the film to be rather dull at times. If not for the "OMG, Godzilla is dying!!!11" angle, Godzilla vs. Destroyah is run-of-the-mill, mid tier Heisei film.  I think it's better than SpaceGodzilla and MechaGodzilla II but falls well short of Biollante, Return & King Ghidorah.  I'd have voted for Godzilla 2014 in the opening round if I was posting at the time.

Godzilla vs. Destoroyah is an emotional roller coaster ride of a film. The special effects aren't the absolute best though and the characters weren't the absolute best either. Miki segusa did pick her character back up with this film with more interaction and even made juniors death seem even more saddening than burning Godzilla melting down. I do love that Akira ifukube scored what was to be Godzillas final outting. His heartbreaking music couldn't help but touch the movie goer. Even though people were aware that Godzilla was going to die, in the end, they are not prepared for it.

The thing that hurts this movie advancing is the somewhat decent characters.

Godzilla vs. Biollante is just a wonderful film. It introduced the first of the most favorable and iconic Godzilla suits in history. The battle between Godzilla and Biollante is farfetched from the first encounter when Godzilla ignites Biollante into flames. The final battle is a no holds barred and the battle more or less ended in a draw. The movie is carried by the special effects, great characters, and an amazing story.

My vote is for Godzilla vs. Biollante.

I vote for Godzilla vs. Biollante. It has more of a lighter tone whereas Destroyah has such a grim tone. I still like Destroyah but give Biollante the edge.

I vote for Godzilla vs. Biollante. It has more of a lighter tone whereas Destroyah has such a grim tone. I still like Destroyah but give Biollante the edge.

GMAN2887 - I cast my vote firmly in favor of Godzilla vs. Biollante! The moment in which Godzilla rises up form the volcano after he fell therein in The Return of Godzilla was absolutely fantastic! :)

Gonna have to go with Godzilla vs. Biollante. It's at least top 3 Godzilla films for me. The plot is one of the greatest in the series. The characters are heavily involved in the plot and intertwined, Godzilla looks the best he ever has, and Biollante is one of, if not the most, complex and unique of all of Godzilla's foes.

The terrorist plot running throughout the film is great, with Middle Eastern terrorist organizations attempting to get their hands on G-Cells in order to create a biological weapon. The "G-Alert" system, like an inclement weather warning system, was a great touch and it's a shame it never came back.

"I vote for Godzilla vs. Biollante. It has more of a lighter tone whereas Destroyah has such a grim tone."

I don't really see that at all. I respectfully disagree. Biollante is a much darker film. While, yes, Godzilla dies at the end of Destroyah, the rest of the film was rather light hearted with it's kaiju action and plot, especially the laughable "Aliens-esque" scene of the Military squad vs. the infant Destroyahs. Godzilla vs. Biollante had the nerve to kill off several of it's main characters throughout the film, various terrorist attacks throughout (including Godzilla being released), and Godzilla and Biollante's battles being the most gory of any previous Godzilla film.

Having recently watched both of these movies I can easily say they are both middle of the pack for me. The idea for both monsters is pretty interesting, but overall I think Biollante is a better movie.

My vote is for Biollante.

Godzilla vs Biollante is just, a dominant film. It has everything you need in a G film and more! Happiness, sadness, Godzilla, it's just a perfect Godzilla film that is executed nearly perfectly!

Looking at this, all I can say is may VS Destoroyah rest in peace.

You're not the only one losing their favorite movie this round.

^I don't know Durp. The twitter votes are making this close. Surprised you haven't dipped your toes a little further into this one.

I can't really decide. I think I understand how a parent feels when their children are on different teams competing, you cant really vote for one. I know Biollante is a better movie, but I can't vote against my favorite, so I just figured I'd leave it to others.

Both of these films are near the top of anyone's list. I really can't blame you durp for not voting.

Trending Articles
Forums & Community
Will the new sequel Godzilla and Kong most likely involve romance or not? 3,675
Is this real? 656
Predictions for Godzilla 3? 1,171
LEGO Kiryu is running out of time! Please support now! 1,061
Are godzillas thigh fat 1,751