DEBUNKED: There is no such thing as 3 forms (Shinzilla)

August Ragone, a trusted source who's been reporting on everything kaiju/toho for a VERY LONG TIME debunked the "3 forms" debacle from a questionable website called BirthMoviesDeath. August is the one with the blogspot who reported back in 2015 an exclusive trailer was being shown at a film event etc. He was also one of the first people to see and the godzilla 2016 design and confirmed it was real when it leaked. Godzilla-movies.com also reported using him as a source as well on their website. Anyway here is his tweet

And here is a message from him:

"Here you go: "Yes, Virginia, the photos are real — that's why I posted my story. With that being said, I never wrote there were multiple forms, not even three. Someone, somewhere, must've taken my statement that there were three operators needed to bring this new Godzilla to life. And it grew from there.

It seems suspicious that someone would quote my article (a day after I published it) and then post a follow-up claiming that they spoke to someone at Toho who confirmed the alleged 'three-forms'. I don't think that Toho would release that information — a huge revelation — to anyone in the US before it was issued on their official outlets (websites) or to the Japanese press, first.

Unless, it was someone in Japan with loose lips. Perhaps the same person who leaked the images? In my experience, it just seems extremely fishy of B.M.D. to have access to that information, let alone be allowed to disseminate said spoilers.

In the future, I can be contacted through my blog or on FB and Twitter. I will also be appearing as a guest at G-Fest in Chicago, Tiki Oasis in San Diego, and Con-Volution in San Francisco this summer." 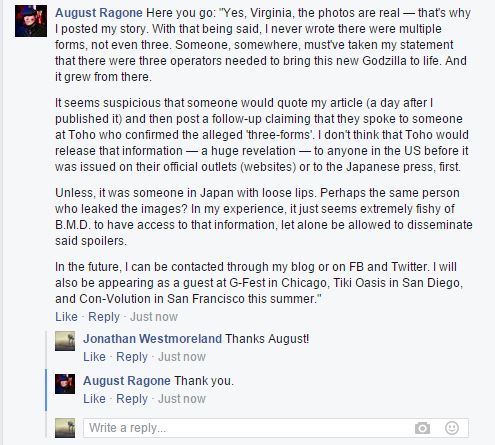 8 Responses to DEBUNKED: There is no such thing as 3 forms (Shinzilla)

This is honestly the first time I've heard about this "three forms" rumor. I understand the suit needs three "people" to operate it, but the three forms is just foolish. Godzilla has never had any (canon) alternate forms except for Burning Godzilla, and the fact that he entered this Burning form was bad (medically, it did eventually kill him and nearly the rest of the world). Whoever got this "three forms" idea either misread the original article or is trolling us. But I doubt someone is trolling us.

Makes sence, toho would not have the budget to buy 3 animatronics, and its actually a good thing, the zombie desiggn looks to awsome to waste

As neat of a concept it is, I'm glad some clarity has been brought to this rumor. Thanks for sharing!

I would only like to see something like scabbing, rather than different highlights of some kind of healing past that.

If Toho says, without any equivocation, that Godzilla will not 'transform,' then we can say that he will not have any other forms. The mere absence of a confirmation from them about any different forms is not the same as it being false.

The point being made here is not that we have confirmation there won't be three forms or Godzilla changing throughout the film. What we have here is still a rumor and no confirmation of anything regarding the theory whatsoever.

It could still be true, but the guys reporting it as fact have no idea and certainly don't have confirmation from Toho. I know this is coming late, but I thought I would put this out there ......

This is old news and unfortunately not true. It does have four stages of growth possibly a fifth. According to people who have seen the movie in Japan have confirmed the four stages of growth. The first stage we don't see but there is an clay image of that stage. Second stage is more like a platypus or turtle like. Third stage is snake like with legs and a small head tiny stubs for arms, and finally under developed dorsal plates. Fourth stage is where you see him upright with those tiny arms, and I believe he is not finished he will need to further develop to his fully developed form. Maybe we will see that in another movie who knows....