UPDATE: Seems there were some errors in the previous report. Nothing drastic, but worth correcting. The full name of Satomi Ishihara's American agent is Kayoko Ann Patterson and Hiroki Hasegawa's name proper is Ladou Yaguchi.

Thanks to Gormaru Island for letting us know about the corrections.

If it seems like we're relying on Gormaru Island a lot it's only because they tend to be the English speaking source for the latest Godzilla Resurgence information. If there is a bread crumb to be found about the production they tend to sniff it out. Granted, the latest bit isn't going to increase hype levels, but considering how little we've heard from the production recently it's easily the most noteworthy news as of late.

Interview segments of Godzilla Resurgence, seen at Toho Cinemas, reveal the character names of the lead actors in the production. Pictured below, from left to right, are actors Yutaka Takenouchi, Hiroki Hasegawa and Satomi Ishihara: 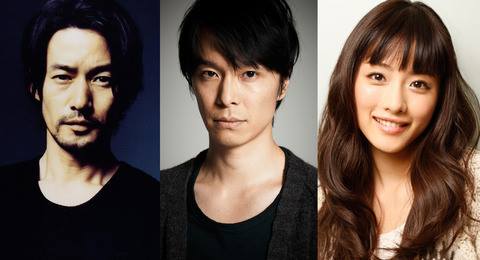 Takenouchi has been reported to play a Japanese government official. His character's name is Hideki Akagi.

And Ishihara will reportedly play a Japanese-American agent, evident by her character's name: Ann Patterson.

You can read more about these talented actors and some of their background here. Until we know more, how do you think these characters will interact with the title antagonist? Let us know in the comments below.
--
Sources:
Gormaru Island

It's not much, but at least it's something. We haven't had news about Shin Gojira/Godzilla Resurgence for a while now.

What's the matter? Is Shelly Sweeney not available?

I guess Shelley Sweeney won't be needed after all.