Well it's not particularly a weird shape, but I just wanna show that it seems Godzilla isnt gonna have a perfect "Big spike to small spike" pattern that much. You know the pattern; the spikes starts perfectly from the head being small at first, then getting bigger when going down to the mid-back, then again going back to small down the tail, in a PERFECT pattern.

And these brighten images show that the pattern aint gonna be absolutely perfect anymore and will have the tail spikes length out of alignment of big to small.  But im not saying thats stupid, I love that new idea to have spikes on Godzilla that suppose to be smaller but are just bigger.  It makes more sense since Godzilla's mutated, which means his shape shouldnt look all too perfect and in alignment.

And thats not the only thing I wanna show, here's the video that I found these images from, because these images shouldnt really be my credit, only the spike on the tail spotting is lol but here:

PICK YOUR TITAN
17 Responses to Weird spike shape on Godzilla's tail AND better look of Godzilla.

Thats insane.. I saw more attributes of Godzilla by pausing it everytime lightning strikes flicker up the screen!

IKR thats what I did too, now I have a better look at Godzilla, just like what the video says

Great find. Thanks to you I we can all see the back spikes and his head much better.

Well when i saw the prototype pictures for the encounter at the end of the tell you do see a big spike on the tail here,s an example

as you see at the end you do see a little bid of big ones but I know Edwards does not want the plates too big so im sure he,ll fix it the only way too find out is if another trailer will come out or maybe the news will tell us.

and also now that the pictures of Godzilla is mroe clear i can see who big the plates are and find Godzilla,s arms

XXSABERBLACKCROW True, but you know, im fine with that spike being that big, having more of a unique design to it

Is it just me, or do the spikes look like a combination of Godzilla 2000 and 54? AWESOME! Also if you notice, this Godzilla has 3 rows of spikes. What I love is that the middle row starts at the top of the head, while the other 2 start at the top of the back not touching his neck area.

Stegosaurus descendent? Wasn't that originally what Godzilla was? A T-Rex and a Stegosaurus combined essentially? I'm talking way back, before the "Godzillsaurus" was even a "thing".

I'm not sure the weird spike on his tail you see is even a spike, since the poster, showing Godzilla's tail doesn't have any abnormally large spikes which stand out. However, it could be at the very tip of his tail, but still, I can't see Godilla having a big Stego-style spiked tail.

Hey Chris if you actually watch the video and watch the tail closely at 0:23 then youll see that the big spike is actually part of godzilla because it like moves with Godzilla.   Even at 0:03 can show too that the spike is pretty much connectedd to Godzilla.  Hope im not wrong when we finally see the full design lol but i can be wrong too

Looks great. BTW how do you display pictures like this can you tell me?

so I dont have to send mine in links.

BTW that scene could probably just be made for the teaser trailer.

well godzilla is mutated. i doubt everything about him will be symetrical like his teeth in that one poster

KAIJUJIRA You just copy the image's URL then paste it in the Insert Image source.

DINOBOY22 Yeah thats what I said too, Godzilla's gonna have some odd but cool shapes in this movie and cant wait to see them.

Here's two pictures I was able to get from the video. 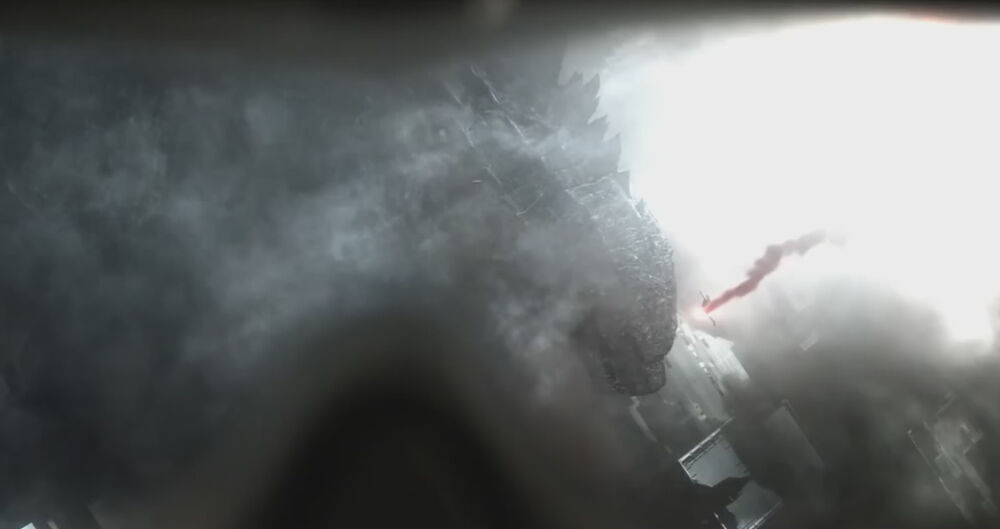 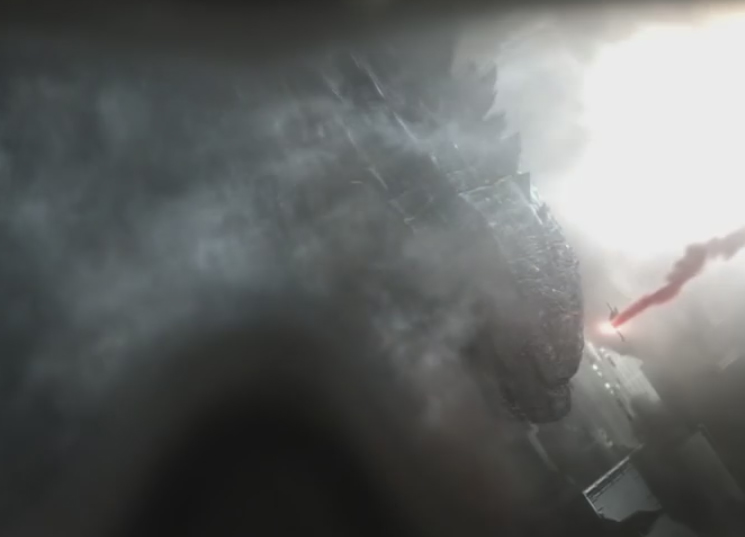 I'm also seeing the rumored "Beefy Neck" on the stills of Godzilla. I'm semi ok with it, as long as they don't make him hunched over as bad as Zilla. I don't know if this popped in properly, but if so, this is what I believe the "odd spike bit" at the end is. That, or it's a bit of rubble to his tail's left. Either way, I really doubt it's a change to his design.