What Future Bandai America Figures Do You Want Made Next? Vote in Their New Poll!!!!

But for the last few years, Bandai’s Creation line has been in a rut. With re-releases out the wazoo, and incredible figures like King Caesar that NO ONE is buying, the line has been pretty stagnant for a long while now. But that is (hopefully) about to change…

Bandai America has, as of late, began to reach out to the fan community to see what we want from the line. After months of preparation and logistics to be worked out, and with the assistance of Toho Kingdom, a pole has just gone live asking the fans to speak up!

Since many of you are huge fans of the Bandai creations Godzilla line, we're going to help them out by holding a couple of polls to help decide what next years releases should be!

Poll #1 What re-releases of past monsters would you like to see?

Poll #2 What NEW monster would you like to see? ONLY monsters that were in Godzilla movies here everyone. NO requests for Sanda, Gaira, Zone Fighter etc.

Email your choices here: [email protected] and just leave your answers to polls #1 and #2 and that's it. NO long, drawn out emails with paragraphs to slog through. When emailing your choice, specify what size. 12 inch or 6 inch. Or both! Happy voting everyone!

Pretty cool, eh? Personally, I recommended a new Megalon, and Anguirus 1955 (A PROTOTYPE THAT THEY MADE EXISTS! THEY COULD DO THIS VERY EASILY!), and either or both MUTO’s, since no one else seems to be making them.

If you have the time, follow the link and shoot them an email! From what I hear, Bandai America is genuinely interested in what the fans want, and are doing this to see what the community wants from this series! So there’s a good chance that what you vote for, should it be a trend with other voters, will get made eventually!

So what did you/will you vote for? Let your voice be heard by Bandai and in the comments below!

PICK YOUR TITAN
14 Responses to What Future Bandai America Figures Do You Want Made Next? Vote in Their New Poll!!!!

.... the marvel godzilla and the stan winston godzilla

Thanks for the heads up Danzilla93,

We need to see a cheaper Biollante figure already. I don't want to bust $600 for the SH Monsterarts one.

Uh, there's no such thing as a "FemGoji," unless it's some kind of fan-made monster.

^ Isn't the suit used in (Son of Godzilla) a FemGoji??

You just reminded me, I should have mentioned the Millennian in my email.

And I forgot Varan too.  One of my top 5 favorite monsters, and I forgot him.  Oh well, hopefully enough people pick up my slack. :) I think the MUTO's should be made next year, for sure.  Heaven knows there's enough of a demand for them!  Lets make it happen, people!

8,
The suit from Son of Godzilla is called MusukoGoji. Musuko translates to the word "son".

Yes, the name of the suit is MusukoGoji, and it is still just the normal male Godzilla. Minilla was adopted by Godzilla and Godzilla is and alwaysn has been explicitly referred to as male by Toho.

There has never been, nor will there ever be, ANYTHING called Femgoji.  The 1967 suit from Son of Godzilla is called Musukogoji, derived from the Japanese title of the film Kaiju-to no Kessen: Gojira no Musko.

Now back to Bandai America. 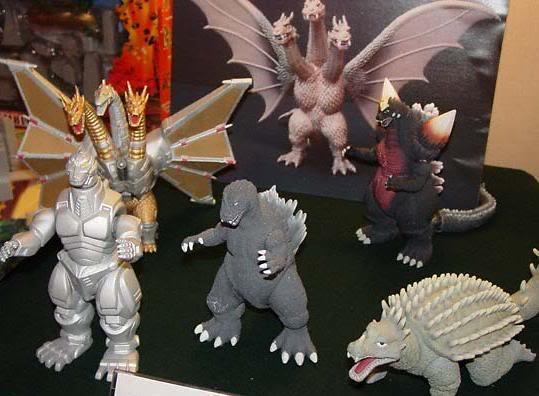 This bad boy has been sitting at Bandai HQ unproduced for over a decade, along with that Mecha-King Ghidorah.  THERE HAS NEVER BEEN A 6 IN. VINYL OF THIS SUIT!!!!!!!!  Its something Bandai America could EASILY produce anytime they wanted!

If you are interested, the more votes for this one, the better!!!!

Trending Articles
Forums & Community
Them! Is Getting A Remake. 435
Godzilla Series Tier List 1,733
the many strange faces and forms of eva-01 merchandise 627
Will the new sequel Godzilla and Kong most likely involve romance or not? 6,545
Is this real? 889