I kept noticing people on Youtube have been repeatedly saying that the Washington D.C scene in KOTM and the cave painting in Kong skull island/Monarch website is somehow evidence that rodan can apparently shoot fire/lava from his mouth despite the fact that neither the novelization, website, BTS material for the film or the director himself actually confirmed it whatsoever. Is it actually true or is it just a case of mistaken perspective? I'm kindve in the latter camp myself.  https://images.app.goo.gl/SDjCKaQm4fUa3wE18 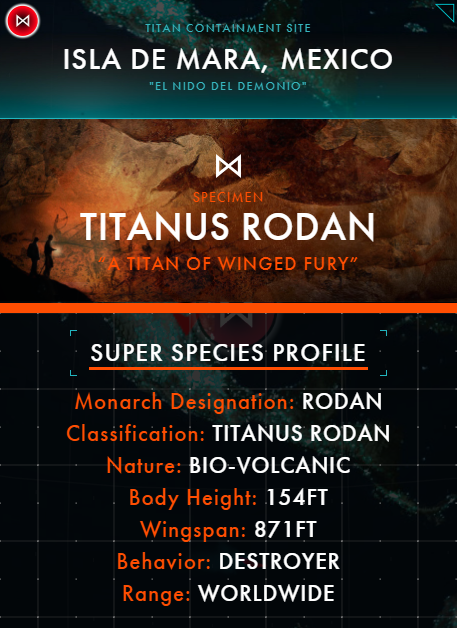 Well, I dunno either

I can see how it looks like that, but since there’s no actual confirmation I’d say he can’t.

I'm in the camp of no, he can't. He's only done that twice before, as Fire Rodan and in the Pipeworks games. It was never an essential part of his shtick, plus so far only Ghidorah and Godzilla have had beam attacks in the MonsterVerse, and if Rodan had one too it would make the ability seem less special overall. Besides, if I interpreted the battle correctly Rodan can already channel his magma system to scorch enemies at close range, and that's cool enough for me.

That said... if in Godzilla Vs Kong he makes a surprise entrance by blasting a fireball down from the clouds above I will not object in the slightest, because that would be awesome. :P

Well beam/lazer/plasma attacks are the staple of most kaiju

Only thanks to Godzilla's popularity, his personal pantheon is much more balanced. In the Showa films the ratio of monsters with and without beam attacks is heavily in favor of the beamless. Rodan and Mothra didn't get energy attacks until the Heisei era, so with the exception of Minilla and technically King Caesar Godzilla was the only heroic monster in his universe with a beam attack until the 80s. The MonsterVerse seems to want to stay at least somewhat grounded, so like the Showa era it appears to be keeping the beam-blasting monsters to a minimum to make them more noticeable and keep the fights from devolving into the static shootouts we sometimes got in the Heisei era, which is fine by me. Of course I could be proven totally wrong next year, but currently I like how they've done things so far.

SasquaDash 76% To Next Rank
Titanosaurus

monsterzero9 67% To Next Rank
Titanosaurus

sonictiger replied to Would GvK have been a satisfying ending for the monsterverse.

SasquaDash replied to Would GvK have been a satisfying ending for the monsterverse.

sonictiger replied to Would GvK have been a satisfying ending for the monsterverse.

SasquaDash replied to Would GvK have been a satisfying ending for the monsterverse.

G theorist started a new discussion: Would GvK have been a satisfying ending for the monsterverse. on the Godzilla Movies forum

Xenotaris just cast their vote on the Poll: Favorite version of Skull Island?

sonictiger just cast their vote on the Poll: Favorite version of Skull Island?

SasquaDash just cast their vote on the Poll: Favorite version of Skull Island?

HinikunaGoji just cast their vote on the Poll: Favorite version of Skull Island?