King Ghidorah would ultimately defeat Godzilla in a one versus one scenario. Change my mind.

Which King Ghidorah? Which Godzilla?

Anime Ghidorah (Is it weird I really like this Ghidorah) Sure,

Oh straight facts. KoTM Ghidorah was of alien origin(as with most of its incarnations) which is why Ghidorah was almost(probably was) immune to the oxygen destroyer. Does not abide to the laws of Earth. The Netflix anime trilogy movie, which was my fav, being a being that existed and didn't exist at the same time. Godzilla had to get assistance nearly every time he encountered Ghidorah, either by human help or another third party.

SarcasticGoji,
Showa King Ghidorah would have trampled Godzilla in a one-on-one fight. He took on Godzilla, Rodan and Mothra by himself, 11 monsters at once and Godzilla was never able to stand toe-to-toe with him in a fair battle.

But he had to be mind controlled, at least in Astro Monster. I guess my line of thinking was incorrect. I remember all the times he got defeated is because he was ganged up on. In DAM his defeat is kind of pitiful in my opinion.

He wasn't mind controlled in Ghidorah: The Three Headed Monster, but I don't see how being mind controlled negates the fact so many other monsters were needed to defeat him. Being taken down by 10 monsters or so isn't a bad way to go out.

SarcasticGoji, you're right.  For anime and MonsterVerse.

I highly doubt legendary Kong could beat Legendary King Ghidorah, not only does Ghidorah severely out weigh him, he’s way larger, has the flight advantage which gives him advantage in travel speed and agility, he has a way larger arsenal, with gravity beams that would scorch his flesh similar to how he did with Mothra, three heads to overwhelm him with multiple attacks at once, large spiked tails to knock him off his feet and possibly break bone, he can withstand far more damage than Kong, has an edge in intimidation with his size and his huge wings he uses similar to how grilled lizards use those frills to make themselves seem three times larger which will definitely work on Kong. I don’t see how Kong can actually win, but I’m not saying it would be completely one sided, I just think there’s a 85 to 1 chance of him winning.

Kong could easily either do these:

2. Do what he did to Skullcrawlers

3. I'm not a Titan expert, there is no three

True Kong having an axe would help a lot, but don’t forget that it’s main use is to divert Godzilla’s atomic breath so he doesn’t get scorched by it completely, this wouldn’t work on Ghidorah because he doesn’t use atomic breath in the first place, also his larger arms and hands will help worth dealing with the heads but he only has two hands and there are three heads. Ghidorah can also simply regrow any limb within minutes if it gets cut off with his axe, which could also be take away by Ghidorah, cause I guarantee the strength oh kings arms can’t really that well against three heads of Ghidorah pulling on his axe whilst he flies into the air to attempt to break it. Ghidorah could easily just lift Kong into the air and drop him like he did with Godzilla but this would outright kill him.

That’s exactly my point. Thanks for agreeing with me!

if ghidorah fought kong it would be a 1v1, ghidorah winning saying kong to bow, kong declines and ghidorah kills kong

What if Kong chokes them?

Really stupid, I know.  Or do this: 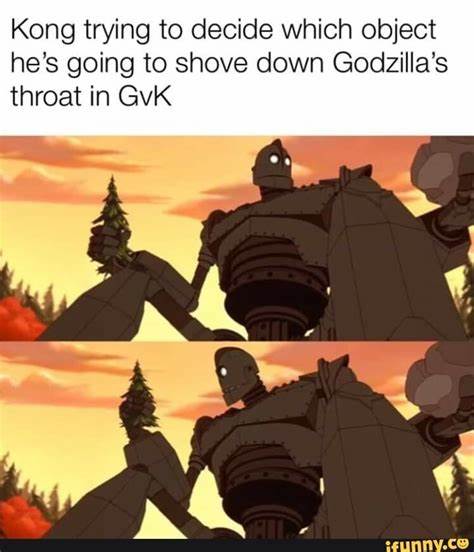 Didn't Godzilla try that? Doesn't Kong only have two hands and King Ghidorah have three heads? Doesn't King Ghidorah not need oxygen since he survived the Oxygen Destroyer?