I watched the original, 1954, Japanese Godzilla with English subtitles last Saturday (10-11-14) with my soul brother, member Indiana Jones. He brought it over for us to watch because I had never seen the original (hold the hate comments). Eventually we got to the point where Doctor Serizawa was given the opportunity to make the decision of whether or not he was going to use the Oxygen Destroyer to kill Godzilla and the rest of the ocean, or let Godzilla and the ocean life live and find a different way to subdue the beast. 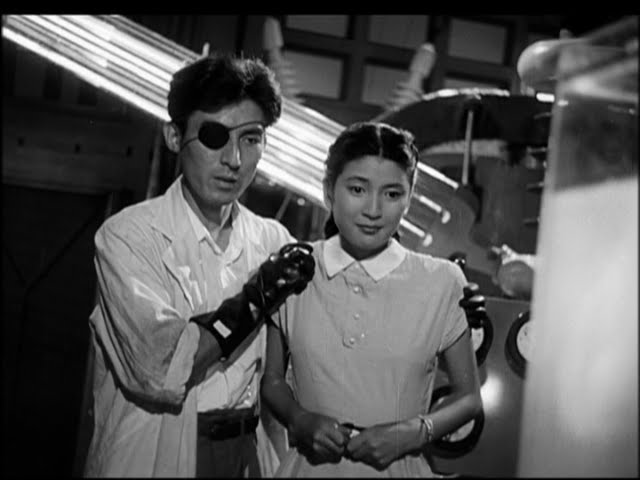 Me and Doctor Jones came up with a ‘would you rather’ by basically copying the situation from the movie; “Would you rather use the Oxygen Destroyer to kill Godzilla and save the day, or let the ocean live?”

At first, I found it a difficult decision. Though after a few seconds of thinking, I decided I would NOT use the device and would destroy it. The reason being the obvious effects of the ocean being dead; a missing major food source being the main effect. Not only that, but also a bunch of other things that I don’t really feel like listing. :P

PLEASE. Tell me what your decision would be, in the comments below. (Especially you Indy. You never told me what you’d do)

PICK YOUR TITAN
48 Responses to The Oxygen Destroyer

Something real- Ikr, out of all the Gojira's the original is terrifying, i always cringed when he killed those people with his breath.

Gmk was the animal, he wasnt really thinking nor was he smart, he killed himself.

holy crap. my discussion made it to 30 replies XD

GORILLAGODZILLA - Indeed! Those sequences were bloody awful - and terrifying! The initial scenes of the film showing the little children undergoing screening for radiation poisoning are dreadful - and let you know just what sort of movie you're about to behold! :)

GG Did you just say gmk was a animal? You just told me yesterday he was basically a human

GG, 1954 godzzilla whas just an animal, he killed everihting cause he whas angry at mankind, like any normall animall wouild do

A normal animal wouldnt have the sheer intelligence to want to destroy mankind, Gmk however was acting on instinct to destroy everything due to the rage from the souls within.

Flyers GMK was being controlled though, he is not a human but he has mroe intelligence then the average beast.

GG many aninals have that inteligence, if you can call it that, its just instinct, and GMK godzilla is not really beeing controlled by the souls, like Gman said its a dub error

I don't ever remember him not wanting to use it because of the ocean, I though it was moreso to keep it out of the eye of mankind.

Anyway I'd use the weapon, Godzilla was essentially a guarantee at death and destruction being brought on people, whereas everything else you at least had a chance of making it out

@Indiana Jones... I was thinking about dropping it down Godzilla's throat, but then I read your comment.

@Something Real, I can see that working.

I'm glad someone like Durp finally, after three pages, pointed out the big flaw in the question here. Dr. Serizawa didn't want to use the Oxygen Destroyer because he didn't want to reveal a new super weapon to mankind. It had nothing to do with killing sea life and fish. Hell he was content with doing that in a water tank in his lab.

The dilemma as that his weapon was just as deadly, if not more so, than the Nuclear Bomb. That was the whole reason he sacrificed himself. He didn't want some super power to kidnap him and force the formula out of him.

The sea life in Tokyo Bay had probably already been damaged by Godzilla. Earlier in the movie it's established that Godzilla is responsible for the bad fishing season along the cost of Odo Island. Although there was clearly still sea life in Tokyo Bay when Serizawa and Ogata went to drop the Oxygen Destroyer, (either from using them as a food source or killing them with his bodies' radioactivity) the sea life was most likely already harmed by Godzilla's presense. So why even bother considering that an issue?

The really issue about the Oxygen Destroyer is the idea that it's the atomic bomb 2. Would you really expose the world to something that dangerous again? What if there was just reason to use would you still? That's the bigger issue.

MechRodan,
I find your idea of using 10 nuclear bombs against Godzilla in the original film directly in contradiction with everything it's about. Japan was still trembling from nuclear terror and even against Godzilla I think the country would have ruled out a nuclear offensive against something in its own waters.

GorillaGodzilla,
There's nothing in the movie to suggest that Godzilla in 1954 was sentient. If anything he was made to be tragic.

Honda himself said, "Monsters are tragic beings; they are born too tall, too strong, too heavy, they are not evil by choice. That is their tragedy." And while making the original film Tsuburaya even emphasized to Haruo Nakajima that Godzilla can't be directly looking for something to destroy, but rather knock over what ever is in his way. Meaning he was intentionally trying to kill anyone unless they aggitated him.

Gman- i understand your point and your statement but, if Gojira 54 isnt a evil being, why did he kill the woman with the baby? And blow and aim a direct atomic breath at those people in the streets? If thats not evil, i am not sure what is.

Animals don't defirantaite between young and old, especially with prey or Competition, Lions, Hyenas, and Cheateas kill eachothersacting on baby's to avoid competition, and many predators prefer easy kills by atacking young or sick prey, so Godzilla is just on instinct, besides killing a kid is not so difrent than he killing anithing else, even in the new movie he killed some kids

JRR more or less nailed it. There is no shot in the film that conveys Godzilla was specifically going after the woman and her children. In fact there's no shot to confirm he actually killed them. It's insinuated at best.

And Godzilla seemed to be on a violent territorial rampage. One might assume that the bombings in the ocean earlier in the film beckoned him to attack Tokyo. There's nothing really to allude to that either, but it's about more sound reasoning than assuming he was an evil sentient being intentionally trying to murder people. Even the GMK Godzilla's attacks were largely incidental despite coincidentally coming back for prior victims. That's just not what any Godzilla incarnation is about and largely misses the point.

JRR- when did he kill kids?

Also all Godzilla's kill people, but 54, atleast i feel actually saw the humans, and blasted them in cold blood.

I happen to think that, while terrifying, Godzilla in the 1954 film was simply on a rampage fueled by his extremely rude atomic awakening. If I'm not mistaken (and please correct me if I'm wrong) Godzilla's appearance is meant to convey that he was actually burned by the atom bomb that roused him. Thus, one can assume two things. One, he's in a great deal of pain. Two, he's enraged by his misery and is out on the warpath to end what's caused him pain. I doubt Godzilla had it in for anybody in particular; he was just tearing down the big, noisy, flashy, lit-up forest from which the painful fire that burned him originated. Of course, this is simply my assessment of the situation. Godzilla might have have an underwater "to kill" list lined by the names of several choice individuals - the over-zealous reporter and the woman with her children being somewhere at the mid-point. Steve Martin never actually appeared on the list as he wasn't present for the events until after the fact. ;)

you all prove very interesting points. i can't believe my discussion made it to 40 replies overnight!

also. it's kind of our own 'would you rather' I guess I wasn't really thinking straight when I typed it. NEVERTHELESS a question is still a question no matter if it's based off of some other situation or not.

SasquaDash started a new discussion: Which MonsterVerse Show Are You More Excited For? on the Godzilla Movies forum
More Godzilla Fandom Activity